Discover the Hidden Jewish Heritage of Lodz, Poland, and its Beauty – Part 2 - The Jewish Voice

Discover the Hidden Jewish Heritage of Lodz, Poland, and its Beauty – Part 2 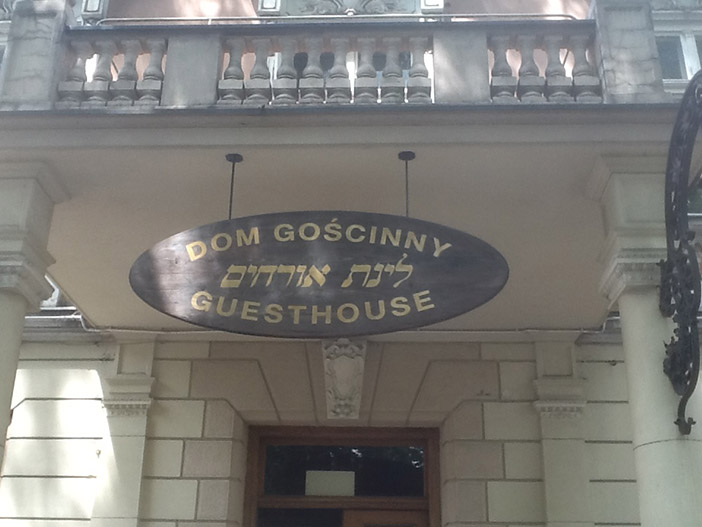 Looking for Total Luxury at a NYC Hotel? Try the Aman New York with a $200,000 Club Fee

Amazon To Buy Vacuum Maker iRobot For Roughly $1.7B

California announces plan to charge landowners for their own water

This park is an impressive site covering 15 acres where the Ghetto was situated and includes 594 trees planted by survivors. The saplings consist of birches, oaks, larches, maples, and ashes. Each tree is numbered and registered under the name of the survivor who planted it. Survivors who visit Lodz in the future are invited to continue this tradition and plant a tree in his or her honor. The park has a walk with the names of survivors, leading to a Memorial Mound, on a hill 8 meters tall from which most of the city can be seen.

Its walls take the form of a six-pointed Star of David. Currently, there are 6,200 names of Poles on this list which accounts for 28 percent of all Righteous Among the Nations worldwide. The names of the heroes are listed on a wall in Yad Vashem’s Garden of the Righteous. One of them is Irena Sendler, who helped save more than 2,500 children from the Warsaw ghetto and found shelter for them on the “Aryan” side. A high triangular pedestal supports an eagle with spread wings (the symbol of the Polish nation) and the words: “He who saves one life, saves the whole world.” On both sides of the alley grow geometric patterns of trees. They are surrounded by walking alleys leading to a square with a stone placed commemorating the establishment of the park. Granite plaques with the names of the survivors and tree numbers are located along the alley as well.

To learn more about The Marek Edelman Dialogue Center and the Survivors Park, there is no better resource than spokesperson Ms. Justina Tomaszewska. You can reach her at j.tomaszewska@centrumdialogu.com.

The main gate to the heart of Lodz’s Jewish community, consisting of approximately 150 to 200 Jews, is located opposite the magnificent edifice of the Credit Society. The building housed the most important institution financing the construction of factories in Lodz in the 19th century. Across Pomorska, at No. 18, are the most important Jewish institutions of Lodz – the community center, synagogue, newly built mikveh (ritual bath, the pride of the Lodz community) and a guest house called Linat Orchim.

Rabbi Dawid Szychowski, the community’s spiritual leader, is also the recently appointed emissary to Lodz of Shavei Israel, an Israeli organization that encourages people with Jewish ancestry to strengthen their connection with Israel and the Jewish people. Rabbi Szychowski told NYJTG, “The rumor is that there are approximately 2,000 to 2,500 Jews living in Lodz, as I can see from many Jewish names that are on the intercoms all over the city.” Rabbi Szychowski actively participate in the social life of the city, representing the Jews of Lodz during local and national celebrations, educating residents about Judaism and more.

The guest house Linat Orchim offers lodging which is overseen by the local Jewish community. Inside this restored building dating from the 19th century, you will find pristine rooms with twin beds to large-sized suites with private balconies. Religious services are held at the synagogue located next to the Linat Orchim and conducted by Szychowski. The Jewish community in Lodz is growing as it attracts people from other cities to visit and to live in this beautiful city. During the holidays, there is no shortage of visitors at the tables or hands to help with the preparation of meals for Friday Shabbat dinners.

Gan Matanael is the city’s first Jewish kindergarten. The pre-school core curriculum is based on the Hebrew alphabet, Hebrew songs and Julian Tuwim’s poems. The children make decorations for the sukkah and colorful chanukiyot. Other activities include visiting the library, zoo, and museums and sometimes taking long walks. Every day the children have contact with members of the Jewish community as they become involved in the preparation for holidays and Shabbat (covering the Sabbath table is a children’s “specialty”). Both the president of the community, Jozef Weininger, and the Rabbi of Lodz, Dawid Szychowski, shared with me their upcoming project to build a new synagogue and a new hotel adjacent to the existing Jewish community. This project would be hopefully realized and finished within the next two years, but much additional funding needed to complete this beautiful project.

While most cities in Poland have market squares in old towns serving as central gathering places, Lodz has Piotrkowska Street. There is no better way to get acquainted with the city than by exploring this pedestrian street, the longest in Poland and all of Europe. Measuring 4.2 kilometers long, this street is filled with pastel-colored and elegant townhouses, art nouveau and neo-Renaissance buildings, restaurants and cafes, shops, hotels and other important buildings such as the neo-Baroque House of Scheibler to Wilhelm Landau’s Bank House. Some of the attractions you can visit are Scheibler’s Palace, the Jakub Szmulowicz House, Oskar Kon’s House and the Grand Hotel. You will find many statues of eminent citizens on Piotrkowska, and one of my favorites was of Julian Tuwim. As Ms. Paulina Machalowska of the Lodz Tourist organization explained, “Many students before their exams come here and rub the nose for good luck to get good grades.”

Beyond textiles, Lodz has a second industry that is active and doing rather well — filmmaking. Nicknamed Hollywoodge, Lodz has long been accredited as the center of Polish movie making. The city was home to several renowned Polish directors, include Roman Polanski, Andrzej Wajda, and Krzysztof Kieslowski. The city even has its own Walk of Fame located outside the Grand Hotel on Piotrkowska Street, where you will see plenty of bronze stars honoring famous names from the Polish film industry – it is Lodz’s own version of Hollywood Boulevard! The most famous yard can be found at Piotrkowska 138/140. That’s where OFF Piotrkowska is located – a cultural and creative center of Lodz. This former spinning and weaving factory was transformed in 2011 to serve the tourists. There are around 50 small businesses operating: designers, architects, restaurants, clubs, galleries and concept stores. In 2014 it even won the title of the new wonder of Poland in a contest organized by National Geographic.

One attraction that should not be missed is MANUFAKTURA – a place mixed with traditional and modern elements. Manufaktura Shopping Center is considered the largest shopping, service and entertainment center in Poland and one of the largest in Europe. It is located on the site of the former Izrael Poznanski factory. The Center’s slogan is “Manufaktura drives Lodz” – and there is a lot of truth in it, because today, hardly anyone can imagine Lodz without this attractive site full of historical references. In Manufaktura there are, among other highlights, a four-star Andel’s hotel, an almost 3.5-hectare market where cyclical concerts, parties, shows and events are held to attract guests from all over Poland and beyond, a branch of the Museum of Art, an Experymentarium (science center), about 60 eateries, supermarkets and over 260 stores and salons, a movie theatre, bowling alley, fitness club and has the longest fountain in Europe, 300 meters long.

In the afternoon, visit one of the most popular museums in Lodz like the Museum of the Factory. Located in the Manufaktura, the Factory Museum tells about the history of textile factories in Lodz in the 19th century. Another museum, the Herbst Palace and Museum, is the former residence of the Herbst Family. Don’t miss the OFF Piotrkowska,a former cotton mill that has been transformed into a bohemian-esque playground that is full of bars, restaurants, galleries and quirky shops. OFF Piotrkowska is a great place to end a walking tour of Lodz. (New York Jewish Travel Guide)

To plan a trip to Poland, contact the Polish Tourism Board or log on to:https://www.poland.travel/en and http://travel.uml.lodz.pl/