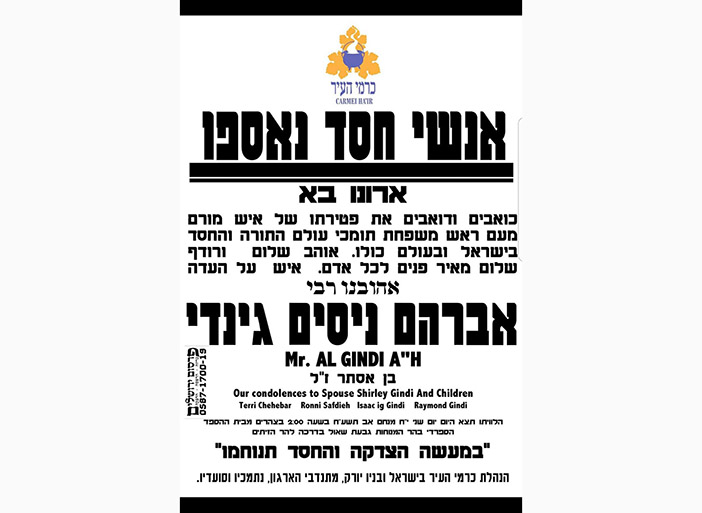 On Sunday, July 29th, hundreds of members of the Syrian Jewish community along with countless others gathered in Deal, New Jersey to pay their last respects to a much beloved and highly respected member of this vibrant community of Jews who origins are from the Middle East and North Africa.

Al Gindi (Avraham Nissim ben Esther) was known to most as the co-founder and co-owner of the iconic Century 21 Stores that dot the landscape of the Northeast. But to his children, his extended family, his friends and the rabbis who were extraordinarily impacted by his prescience and innate intelligence, Al Gindi (a’h) was a larger than life figure; a Torah giant, a Baal Tzedaka and an active community member.

In 1961, Al Gindi partnered with his cousin, Sonny (Samuel) Gindi a’h to create the original Century 21 store. The original concept for the growing company was to become a family business endeavor and to this day it is still owned and operated as such. In the late 1950s Al Gindi suggested the partnership to Sonny Gindi, who co-owned a children’s wear business named Lolly Togs. Another partner was friend and relative Ralph Gindi, who passed away at a young age. Ralph’s children–Irwin, Ellie and Jeff were bought out of the company over a decade ago. Sonny had two sons, Isaac and Eddie. Eddie Gindi, who entered the business in 1977 in the stock room, is now the Executive Vice President & Co-Owner of Century 21 Department Store. Al’s sons are I.G. (Isaac) and Raymond. Raymond has now reached the level of company CEO.

Al Gindi, a’h was remembered as a man who personified the highest level of “values, righteousness and good” by those delivering heartfelt hespedim at his levaya in Deal.

Rabbi Eli Mansour, shlita, a longtime personal friend of Al Gindi (a’h) said in his hesped (eulogy), “We have many books in the library but we never saw Sefer Hayashar. The book of uprightness. So, the Gemorrah says that actually Sefer Hayashar is the Mishneh Torah. The book that we are reading right now, Sefer Devorim is actually Sefer Hayashar. So, the Gemorrah says why? Because of a posuk that was written in yesterday’s parsha. God says through Moshe that you must be yashar. Straight. Trustworthy. Honest. Yashar. That was Al Gindi – a man who was trustworthy, completely honest and yashar.”

He added that, “One of the most important books that was written on ethics was written by a great Italian rabbi called Moshe Chaim Luzzato, the Ramchal. He named that book Mesilat Yesharim. And today, ladies and gentlemen, we came to give hesped to Ish Tam HaYashar. This man, Al Gindi, a’h, had great values and principles. But never will you meet a man who more faithfully lived by his values. He did not only preach them, but first he fulfilled them himself.”

Rabbi Mansour told the assemblage that Mr. Gindi was “the smartest man he ever met” and exhorted Rabbi Mansour to use his skills in communication to the educate the community on pressing issues, whether they be related to Torah values, politics or the culture in which we live. “Mr. Gindi would always tell me to communicate to people in a style he called “man to man” and he repeated that to me on countless occasions over the decades.

Rabbi Mansour recalled that he had met Mr. Gindi many years ago – on a Pesach trip in West Palm. Of Mr. Gindi, he said, “he attended the shiurim – and you could see the brightness and light in his eyes when he heard something that resonated with him. And he came to every shiur and he listened intently. And after the trip when I came home two days later I received an envelope. It was a long letter from Mr. Gindi on the Century 21 company stationery. Mr. Gindi had reviewed every lesson he learned with direct quotes. He would say, “You said this and you said this. This was good, this was proper. This you could have done without. Why don’t you talk about A more than you talk about B. The people like A more than B. And the classes were great; they were wonderful – you inspire me, I love when you talk about the history.”

Speaking of Mr. Gindi’s impeccable honesty and unmatched moral uprightness, Rabbi Mansour vividly recalled that his business ethics were beyond reproach. He said that subsequent to the 9/11 attacks, Mr. Gindi’s business suffered a formidable hit as it’s location was in the vicinity of the World Trade Center. Said Rabbi Mansour, “he (Mr. Gindi) had the chance to take money that didn’t belong to him. When I spoke with him his response to me was, “What? I should make money on other people’s blood? People suffered and I should make a profit on it?” Rabbi Mansour said for Mr. Gindi, “not accepting the money was not a challenge for him. He knew the right thing to do and he did it unflinchingly. That is yashar.

Concerning his political acumen and visionary spirit, Rabbi Mansour remarked that it was Al Gindi, (a’h) who was the first person to tell him about the inherent dangers that the rogue regime of Iran presented to Israel and the entire Western world.

He said that approximately 17 years ago (before anyone even suspected that Iran could pose a threat), Mr. Gindi said to the rabbi: “What are we going to do with Iran?”

Rabbi Mansour responded: “I’m not President Reagan – Iran? What are you talking about? What’s Iran got to do with anything? He says, aren’t you following the news? He said this is the major threat against the State of Israel. If we don’t talk about it and arouse the people then we will be in grave danger. And then he started to give me instructions. You have to do A, B, C, D and E. You are the great communicator.”

On his stellar reputation and the majestic legacy that Mr. Gindi, a’h, crafted, Rabbi Mansour said: “Shlomo HaMelech said that a good name; a good reputation is better than good oil. What does that mean? We are talking about the oil that has a fragrance to it. That oil, its fragrance goes far and beyond from where it rests. Mr. Gindi’s reputation spans the planet. Anyone either from abroad or here that hears this man’s name knows that you are dealing with an Ish Tam v”Yashar.”

He added that, “Nothing is able to bury a reputation of a man with a good reputation. His neshama is lucky. His body will make it to Eretz Yisroel; the land that he loved.” Speaking to the niftar, Rabbi Mansour said, “Your reputation will penetrate even kryptonite. No box, no dirt, no barrier will be able to erase your excellent reputation.”

Rabbi Harold Sutton also recalled a treasure trove of memories that he had of his friendship with Al Gindi, a’h. “Mr. Gindi was always cautious about mitzvot that he felt others needed strengthening on. He told me to educate and communicate to the community the importance of fulfilling all the mitzvot. And he told me to communicate, “man to man. I just have heard it about 500 or 600 times but I promise you it was never enough. I wish I could hear it again. I say this because with Mr. Gindi, It came from the heart. It came from love and it came from real concern.”

Rabbi Sutton said that even though Mr. Gindi ran a huge corporation, his concerns focused on how all people are treated, despite their station in life.

For Mr. Gindi, a’h, “education was the pillar of his life; it was paramount in his life. He much preferred shorter prayers and longer speeches during Shabbat. He told me to educate people; to spread the word; to teach them. We need more people learning,” said Rabbi Sutton.

Raymond Gindi, Al Gindi’s older son said he was “honored and privileged to be my father’s son.” He spoke his father’s humble beginnings and the Torah trajectory he took on the path to his success.

“My father grew up very poor. When he was eight years old he sold chewing gum on the subway to make money. He did not go to school. He had to work to support his house,” said Raymond.

“He started his first business with his partner Sonny, a’h. They both worked very hard. They did everything themselves. My father was very determined to make the business work. If someone said to him it can’t be done, he would figure out a way to do it, “ Raymond continued.

Raymond said that his father “taught me everything I know. I would be nothing without him. Today, when I have problems I always think about what my father would say; how he would handle it. I think about what he would do and it always helps.”

“Rabbis came in from Israel to visit my father. They went straight from the airport to my father’s house for a blessing “ recalled Raymond.

Mr. Gindi was a proud Cohen and loved the ability to give brachot in Birkat Cohanim, said Raymond.

With palpable emotion reverberating in his voice, Mr. Gindi’s younger son Isaac said, “I want to thank HaShem for giving me such a wonderful father. He was the greatest dad. He was our hero.”

Of his father, Isaac said, “You were blessed with so much wisdom–so much intelligence and the highest of ethics.”

He also addressed his father’s love and total devotion to his family. “you took care of mom so well. You did everything for her. Your showed her the utmost respect at all times. And for me, you and mom were an exemplary role model for marriage. For us, your children, you were there for us at every turn. You always offered us sagacious advice and wisdom. You coached us every step of the way. WE were your whole life and we knew it.”

Isaac added, “I thank Hashem for you. I would not be 1% of who I am were it not for you. You gave me everything.”