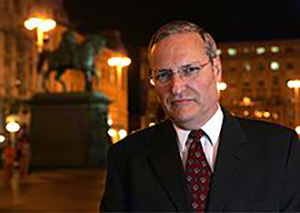 Efraim Zuroff, the Brooklyn-raised director of the Simon Wiesenthal Center in Jerusalem, has been doing some amazing work as he tries to find every last Nazi that got away and has been hiding from justice ever since, most recently turning his attention to providing information about two Nazi collaborators from Germany living openly in Florida and Hawaii, The New York Post reports.

“It was immediate,” Zuroff, 70, told The New York Post when talking about Jakiw Palij’s deportation after being discovered as a Nazi collaborator about 10 years ago. “As soon as the news hit about Palij, I got calls from people who suddenly realized that their neighbors might be Nazis. There are a lot of Nazis out there who were born after 1920 and are still alive. People without a conscience seem to live longer.”

Zuroff has been on the hunt for Nazis on the run since 1978, and he thinks that the problem is much larger than one may be able to imagine. He said that about 10,000 Nazi collaborators managed to cross into America illegally after World War II ended as they tried to run from their haunted and evil past. He said that hundreds more could still be out there in the rest of the world, with most of them likely residing in Austria and Germany.

A notable recent development was when Michael Karkoc, a 99-year-old resident of Minneapolis, was accused of being a collaborator with Adolf Hitler’s Third Reich.

Karkoc allegedly was in charge of a group that was part of the Ukrainian Self Defense Legion and raided the village of Chlaniow in 1944. His group was responsible for 44 murders on Polish soil, and the country had actually issued a warrant for his arrest in recent years, hoping for an extradition, and his family denies all of the charges.

“There were hundreds of thousands of perpetrators of Nazi crimes and the vast majority never left Europe,” Eli Rosenbaum, director of the Department of Justice’s Human Rights and Special Prosecutions Section said. His agency does the work of tracking down Nazis and was the group that investigated Palij and had him kicked out of America.

The New York Post said that Rosenbaum described the case as “the Palij case was a Herculean effort that took hundreds of hours of research and nearly two decades to accomplish, in cooperation with various federal agencies. Palij admitted to the Justice Department in 2001 that he was trained at the Trawniki site in Nazi-occupied Poland, which served as both a concentration camp and boot camp for the SS.”

“By helping to prevent the escape of these prisoners during his service at Trawniki, Palij played an indispensable role in ensuring that they later met their tragic fate at the hands of the Nazis,” according to a DOJ statement.

While we look forward, the Jewish Voice has reported on a resurgence in neo-Nazi activities.

White nationalists are growing, with 8 percent of respondents in a survey saying they backed white nationalism, compared to 65 percent who said they opposed it.

If the survey is accurate, self-identified neo-Nazis outnumber Jews by roughly two-to-one in the US, with some six million Americans identifying as Jewish, or about 1.9 percent of the total population