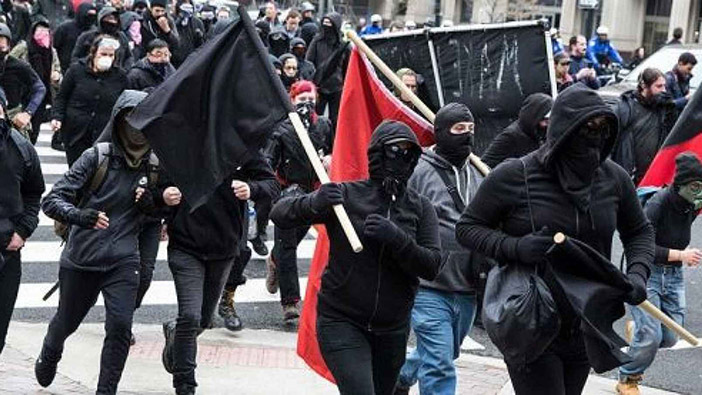 Foul-mouthed Antifa demonstrators went on a rampage August 6 as they assaulted two high-profile conservative activists at a downtown Philadelphia restaurant for being conservatives and supporters of President Trump.

The attack came the day after Antifa smashed the windows at a U.S. Marine Corps recruiting office in Berkeley, Calif., during a leftist counter-protest of a “No to Marxism” rally. Twenty people were arrested. “Besides the damage to the Marine Corps post, Berkeley police also said ‘an extremist element among a large group’ damaged 21 city vehicles, setting one on fire, and slashed their tires,” Fox News reported.

The incident in Pennsylvania’s biggest city also came after the leftist mayor of Portland, Ore., Ted Wheeler (D), allowed anarchy to break out in his city, instead of cracking down on Antifa troublemaking. For 38 days Wheeler, who is also police commissioner, allowed hundreds of his Antifa allies to unlawfully occupy public property at an Occupy ICE protest site that eventually became a biohazard. “I do not want the @PortlandPolice to be engaged or sucked into a conflict, particularly from a federal agency that I believe is on the wrong track,” he tweeted. “If [ICE is] looking for a bailout from this mayor, they are looking in the wrong place.”

The attack in Philadelphia and other recent violent actions by Antifa are yet another reminder that the totalitarianism-loving domestic terrorists of Antifa, who call themselves anti-fascist activists, are the real fascists in today’s America because, among other things, they use violent tactics pioneered by the real-live fascist storm-troopers of Weimar Germany, the Sturmabteilung (SA). These Antifa goons opposed the Nazis but eagerly copied their tactics, using their fists to shut down political opponents and break up meetings and rallies. Some Antifa today even dress like Nazis, wearing black and red, the anarchist colors which traditionally have also been used by Nazis.

Antifa, which as a group has been warmly embraced by many Democrats, have regained prominence in the post-Obama era by assaulting conservatives and Trump supporters. The hyper-violent anarchists and communists of the Antifa movement are notorious for promiscuously labeling those they target as fascists, Nazis, and racists, in the absence of evidence.

Turning Point USA founder Charlie Kirk and communications director Candace Owens were trying to enjoy breakfast at the Green Eggs Cafe when Antifa thugs surrounded them and became loud and belligerent. Antifa poured a bottle of water on Kirk as police officers, who were not white, tried to protect them.

The restaurant assault resembled a Black Lives Matter action carried out on the weekend of Jan. 3 and 4 in 2015. In it leftists terrorized people as they got together for brunch. “Black Brunch” organizers and their followers stormed upscale eateries in New York City and Oakland, Calif., reading out the names of black criminals killed by the police and shrieking that whites had no right to be there. They accused whites of committing “genocide.”

Kirk and Owens were no doubt targeted because Turning Point USA is becoming a formidable threat to the increasingly violent anti-Trump resistance movement. Turning Point is a six-year-old nonprofit organization whose mission, according to its website, “is to identify, educate, train, and organize students to promote the principles of freedom, free markets, and limited government.”

In a bizarre scene right out of Communist China’s Cultural Revolution, young white Antifa agitators blew whistles in the faces of Kirk and Owens, a black woman, while chanting “Fuck white supremacy,” during the restaurant showdown earlier this week. Owens can be seen in a video yelling back at the Antifa activists, “We love the police, we love America, we love the U.S.A.,” as police officers in the City of Brotherly Love tried to separate Owens and Kirk from the protesters.

Soon after the assault, Kirk took to Twitter to denounce the Antifa activists involved.

“If [an] angry conservative mob formed while two young liberals, one white guy and a black woman, were eating breakfast, and the mob hurled horrific insults, threw objects and assaulted them, the left would call it a ‘hate crime’ and every major outlet would be demanding condemnation,” Kirk tweeted.

Interestingly, Antifa activists, like those in Philadelphia who claim America is an irredeemably racist hellhole, are generally young and almost exclusively white.

This fact was not lost on Owens, who referred to Antifa as “an all-white fascist organization” on Twitter, and thanked the police for coming to her aid. “Would like to personally and publicly thank the @PhillyPolice force for keeping us safe today. As you can see in the video, they were all Hispanic and black. The white liberal thugs were shouting ‘no good cops in a racist system[,]’”she tweeted.

Man, I hate @RealCandaceO’s politics, but watching an (apparently) all-white crowd scream “fuck white supremacy” in her face was sickening. I’m pretty sure that no part of being an ally includes actively oppressing women of color.

This is beyond comprehension. What the hell is happening to my party? No matter what you think of @RealCandaceO, even if you hate her, this childish behavior is abhorrent. Fellow liberals, come on. We need to start speaking out more strongly against this bullshit. #NotInMyName

The attackers in Philadelphia seemed to be expanding on the admonition of Rep. Maxine Waters (D-Calif.) who earlier this summer urged her supporters to publicly confront and harass members of the Trump administration over the separation of illegal aliens’ children from their parents in immigration detention.

“Let’s make sure we show up wherever we have to show up. And if you see anybody from that [the] cabinet of [President Trump] in a restaurant, in a department store, at a gasoline station, you get out and you create a crowd. And you push back on them. And you tell them they’re not welcome anymore, anywhere.”

Kirk blamed Waters for the Monday incident in Philadelphia.

Presidential adviser Kellyanne Conway was accosted in a supermarket. Former chief strategist Stephen Bannon was harassed while he was quietly minding his own business in a bookstore. Florida Attorney General Pam Bondi (R), a strong Trump supporter, was harassed by activists outside a movie screening.

But now Americans far outside President Trump’s inner circle are feeling the wrath of Antifa.

And a backlash is on the way.