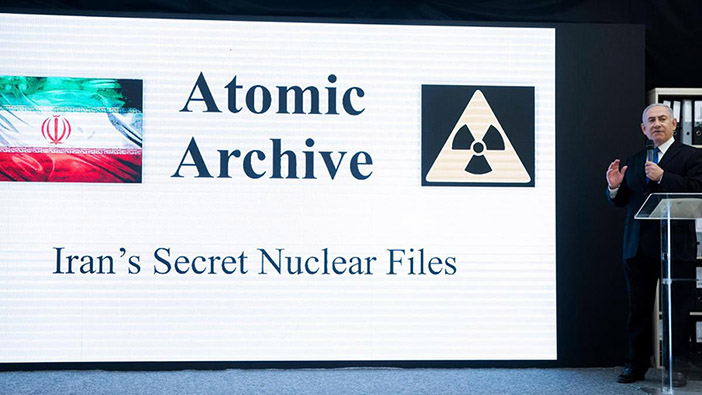 An extensive feature in the New York Times on Sunday provides new details about the Mossad operation in January through which Israel captured 50,000 pages of evidence detailing Iran’s nuclear program.

In January, Israel used a Mossad-orchestrated operation in Iran to capture over 50,000 pages and 163 compact discs of memos, videos and plans related to Tehran’s nuclear program.

An article in the Sunday edition of the New York Times that was written by David Sanger and Ronen Bregman provided details of the operation. Mossad agents disabled alarms, broke through two doors, cut open dozens of giant safes and escaped from Tehran with half a ton of secret documents.

The Times reporters concluded after reviewing the documents that “despite Iranian insistence that its [nuclear] program was for peaceful purposes, the country had worked in the past to systematically assemble everything it needed to produce atomic weapons.”

While Iranian officials halted much of the work in 2003, internal memos show senior scientists making extensive plans to continue several projects in secret, hidden within existing military research programs, according to the report.

“The work would be divided in two: covert (secret structure and goals) and overt,” an Iranian scientist writes in one memo, part of a 100,000-document archive seized in a daring raid on a storage facility in Tehran by Israel’s Mossad intelligence agency in January.

“This archive explains why we have doubts,” a senior Israeli official told U.S. journalists at the briefing in Tel Aviv. The official, like others involved, insisted on anonymity in discussing highly sensitive documents and intelligence operations.

In addition to viewing the evidence itself, the NYT reporters also received details regarding how the Mossad pulled off the daring operation. Specifically, the article explains that the Mossad agents “mov[ed] in on a warehouse in a drab commercial district of Tehran [and] knew exactly how much time they had to disable the alarms, break through two doors, cut through dozens of giant safes and get out of the city with a half-ton of secret materials: six hours and 29 minutes.”

“Once the Iranian custodians arrived, it would be instantly clear that someone had stolen much of the country’s clandestine nuclear archive, documenting years of work on atomic weapons, warhead designs and production plans,” the article explains.

The agents used “torches that burned at least 3,600 degrees, hot enough, as they knew from intelligence collected during the planning of the operation, to cut through the 32 Iranian-made safes,” the Times reports.

While the reporters were provided with these details, the Israeli government refused to reveal how the evidence was removed from Iranian territory, noting, “There was no chase, said Israeli officials, who would not disclose whether the documents left by land, air or sea — though an escape from the coast, just a few hours’ drive from Tehran, appears the least risky.”

The article also quotes a number of experts, including Robert Kelley, a nuclear engineer and former inspector for the International Atomic Energy Agency, who commented to the Times, “The papers show these guys were working on nuclear bombs.”

In April, President Donald Trump announced the US would leave the 2015 Iran nuclear agreement, which lifted crippling economic sanctions on the Islamic Republic in exchange for concessions that the deal’s critics argued provided no protection against Iran’s nuclear breakout in the future.

Since signing the deal in 2015, Tehran continued to test intercontinental ballistic missiles capable of carrying nuclear warheads, in addition to funding and arming terror proxies throughout the region, such as Hamas in Gaza, Hezbollah in Lebanon, and the Houthis in Yemen.

During his speech, Netanyahu revealed that Israel had captured an enormous treasure trove of secret documents from Iran’s nuclear weapons program.

Netanyahu said that the nuclear deal did nothing to derail Iran’s drive towards integrating nuclear warheads onto ballistic missiles, including the long-range Shahab 3, and to expand the range of its nuclear-capable missiles

Netanyahu also showed photographic evidence of the Fordo nuclear site which is built into the side of a mountain some 200 kilometers south of Tehran, and said that since signing the nuclear deal with the so-called P5+1 international group, a reference to the UN Security Council’s five permanent members China, France, Russia, the United Kingdom, and the United States, plus Germany, the site has continued to operate at an expanded rate of operation.

“You don’t put centrifuges under a mountain in order to create medical isotopes,” Netanyahu said. “You do it to create nuclear weapons.

“You also won’t be surprised to learn that Iran insisted on keeping (Fordo operational), and the nuclear deal enabled it to do it. but came with a hitch: Iran was required by the IAEA to come clean about its nuclear program. That was explicit condition for implementing nuclear deal.”

“In 2017, Iran moved its nuclear weapons files to a highly secret location in Tehran,” Netanyahu said.

“From the outside, this was an innocent-looking compound,” he said. “But on the inside, it contained Iran’s secret Atomic Archive locked in massive safes.”

Netanyahu described the archive as looking like a “dilapidated warehouse” . He added that, “This is where they kept the atomic archives. Right here. Few Iranians knew where it was, very few, and also a few Israelis.

The files, Netanyahu claimed, proved that Iran had lied about the nuclear program it officially shelved in 2003, called “Project Amad”, which Tehran had claimed was limited to peaceful, civilian purposes.

Israel has also claimed that the information taken by Israel from the Tehran facility proves the Iranian regime has lied about its current nuclear program, and that while Project Amad was officially ended in 2003, much of the program was continued covertly the closure.

Some details regarding Israel’s intelligence gathering and document acquisition operation were leaked shortly after Netanyahu’s address, revealing that Israel had first discovered the document storage facility in February 2016, and that the mission to capture the files had been undertaken in January, after Iran began transferring top secret material to the facility.

The operation in Tehran’s Shorabad district took place over the course of just under six and a half hours, beginning late at night on the 31st of January.

The Iranian nuclear document storage facility, which had been under close Israeli surveillance since February 2016, would be accessible for a roughly eight-hour window overnight, until the arrival of the morning shift of Iranian guards.

By 7:00 a.m., the Mossad agents were told, the guards would be on site. The Mossad instructed all Israeli operatives to be clear at least two hours ahead of the 7:00 a.m. cut-off, since the arriving guards would quickly discover what had happened and would alert Iranian security forces to search the surrounding area.

Over the course of six hours and 29 minutes, the Israeli team disabled the facility’s alarms and other security systems before breaking through two doors to reach the dozens of sealed compartments which held documents from Iran’s nuclear program.

Fearing that some of them would be caught, the Israelis removed the materials on several different routes.

President Trump was informed of the operation by Mossad chief Yossi Cohen during a visit to Washington in January, an official said.

The official said the delay in making the material public was due to the time it took to analyze the documents, the vast majority of which were in Persian.

U.S. officials reviewing the cache of documents, charts, blueprints, photos and videos recovered by Israeli intelligence said that the materials they had seen were authentic and consistent with information amassed by the U.S. over many years.

“Iran has a robust, clandestine nuclear weapons program that it has tried and failed to hide from the world and from its own people,” she added. “The Iranian regime has shown it will use destructive weapons against its neighbors and others. Iran must never have nuclear weapons.”

Pushback from Europe’s leaders were voiced in the immediate aftermath of Netanyahu’s presentation in April.

He added: “The Iran nuclear deal is not based on trust about Iran’s intentions; rather it is based on tough verification, including measures that allow inspectors from the International Atomic Energy Agency unprecedented access to Iran’s nuclear program. The fact that Iran conducted sensitive research in secret until 2003 shows why we need the intrusive inspections allowed by the Iran nuclear deal today.”

A spokesman for British Prime Minister Theresa May underlined Johnson’s remarks, saying, “We have never been naive about Iran and its nuclear intentions, that is why the International Atomic Energy Agency inspection regime agreed as part of the Iran nuclear deal is one of the most extensive and robust in the history of international nuclear accords.”