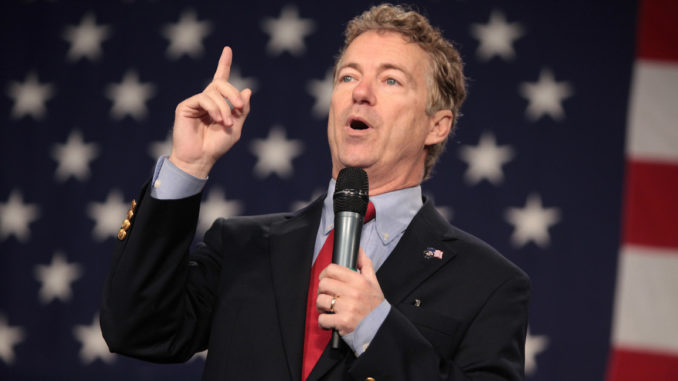 Following Donald Trump’s meeting with Russian leader Vladimir Putin, in which the president sided with the Russian leader over his own intelligence agencies, Sen. Rand Paul (R–Ky.) has accused the summit’s critics of “Trump Derangement Syndrome.”

The comment came during a Monday appearance with PBS’ NewsHour. Earlier on in the interview, Paul argued that having a conversation, “even with our adversaries,” could help with both countries’ mutual interests. “It would be nice to have help from Russia on North Korea as far as denuclearization,” he told Judy Woodruff. “We have the Ukraine situation. So…I think that we won’t have any progress if we don’t have any conversations.”

Paul went on to respond to those who were very critical of the meeting. “I think Trump is different, and he’s willing to meet with foreign leaders and, actually, I think you may get a breakthrough because of the meetings. And I think, if this were anybody else, if there weren’t such acute hatred for Trump, such Trump Derangement Syndrome on the left, I think, if this were President Obama—and it could have actually been President Obama early in the first term, when they were trying to reset our relations with Russia, that could have easily had a meeting like this—and the left and the media would have had a lovefest over President Obama.”

Paul even took to Politico to pen another defense of the president: “Politicizing international affairs is a dangerous game, but that hasn’t stopped far too many in Washington, who seem to have forgotten that a vital part of keeping America safe and secure is avoiding war through strong and consistent diplomacy, from playing politics.”

Trump thanks the senator in a Tuesday morning tweet after Paul made similar comments on CBS’ This Morning, Reason reports.

Earlier this week, Paul set off some outrage when Trump critics focused on a line from his Sunday interview with CNN’s Jake Tapper. Paul blamed America for election meddling instead of keeping the focus on Russia’s past and expected future cyberattacks, saying, “We all do it.”

Former Director of the CIA John Brennan has been a vocal Trump critic during his time as a private citizen. Brennan took to Twitter to voice his strong disgust over the Helsinki meeting and ensuing press conference, calling the events “nothing short of treasonous” and saying that Trump is “wholly in the pocket of Putin.”

Paul took particular umbrage to the remarks, and responded with some  no-holds-barred criticism. “John Brennan started out his adulthood by voting for the Communist Party presidential candidate. He is now ending his career by showing himself to be the most biased, bigoted, over the top, hyperbolic, sort of unhinged director of the CIA we have ever had. And really it is an insult to everything about our government to have a former head of the CIA calling the President treasonous just because he doesn’t like him. But realize that Brennan — you know, I filibustered Brennan, I tried to keep Brennan from ever being the leader of the CIA. But realize that Brennan and Clapper are known for wanting to expand the authority of the intelligence agencies to grab up everyone’s information, including Americans. So I don’t have a lot of respect for these people. Even before they decided to go on hating the president, I disliked these people because they wanted to grab up so much power and use it against the American people.”

The senator announced his intentions to travel to Russia sometime in the next few weeks in order to continue a constructive dialogue between the two countries.