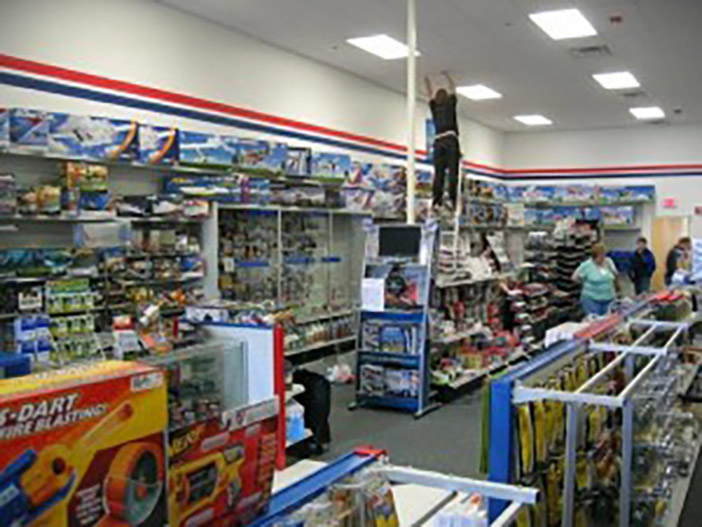 While the twice-bankrupt electronics chain didn’t completely go away, it will soon re-establish a more significant footprint across the country, The New York Post reports.

The struggling 97-year-old chain has signed a deal with HobbyTown USA to open “express stores” inside 50 of its partner’s stores, both companies said Friday.

The deal was signed this week, and potentially, the express stores could be opened in up to 100 of HobbyTown’s 140 stores, according to The New York Post.

If successful, they could expand to all the hobby chain’s locations.

The first express stores will open next week.

RadioShack emerged from Chapter 11 reorganization in January with 400 stores, which are mostly located in rural spots.

The HobbyTown deal will bring the stores to more suburban towns.

“This will expand their footprint quickly,” HobbyTown President Bob Wilke told The Post, adding that “Radio Shack’s merchandise and customers complement ours.”

HobbyTown is purchasing the RadioShack merchandise and offering it to its hobbyist customers who need the tools, wires and other accessories that RadioShack makes, according to The New York Post.

While the HobbyTown deal will bring RadioShack to a bigger crowd, it will not even come close to the more than 7,000 stores the chain had at its peak in 1987.

It operated more than 1,700 stores as recently as last year when it filed for Chapter 11.

Last year, in a desperate effort to keep its doors open prior to filing Chapter 11, RadioShack struck a partnership with Sprint, which paid it rent and commissions to run small Sprint locations in RadioShack stores, The New York Post reports.

It was too little, too late to save the electronics chain.

“We came out of bankruptcy with 400 dealers, our online business and a distribution center,” said Steve Moroneso, chief executive of General Wireless, an affiliate of hedge fund Standard General, which acquired RadioShack in 2015.

“We are just getting started,” Moroneso said. “Our strategy today is to not own bricks-and-mortar locations.”

Next week, a HobbyTown store in Mooresville, N.C., will dedicate 500 square feet of its 6,000-square-foot store for the RadioShack express store and display Radio Shack signage outside, according to the store owner, Jack Hunt.

Hunt’s employees will operate the express store, he said. One service will be cellphone repair.

“We think that will differentiate us,” Hunt told The Post. “There are no other cellphone repair services in our market.”

Meanwhile, Moroneso says there is “plenty of interest from dealers who want to open a full line Radio Shack.”