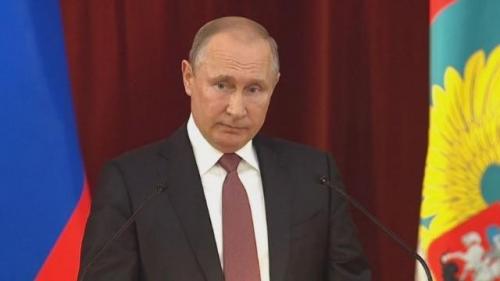 Speaking to a group of US ambassadors, Putin referred to a group of “powerful” people who can “force-feed people their stories that would be hard to digest”, Zero Hedge pointed out

“We see that there are forces in the United States that put their own group and narrow partisan interests above the national ones,” Mr. Putin said. “Our renowned satirists once wrote very well about such people: ‘Pathetic, paltry people.’ But this is not so in this particular case: These people are not pathetic and not paltry. On the contrary, they are quite powerful and strong if they can, excuse my crudeness, force-feed millions of their people various stories that are hard to digest in normal logic.”

Going off script and speaking personally, I’d like to say a few words,” the Russian president said.

“We see that there are forces in the US which are prepared at the drop of a hat to sacrifice Russian-American relations for the sake of their internal political ambitions in America,” he said.

Putin suggested that decades old issues can not be solved with one short Summit between the US and Russia ansd that is was important step  for him to talk to Trump directly.

“The path to positive changes has all the same begun,” Putin said, according to Reuters. “It’s important that a full-scale meeting has finally taken place allowing us to talk directly.”

The Fake News Media wants so badly to see a major confrontation with Russia, even a confrontation that could lead to war. They are pushing so recklessly hard and hate the fact that I’ll probably have a good relationship with Putin. We are doing MUCH better than any other country!