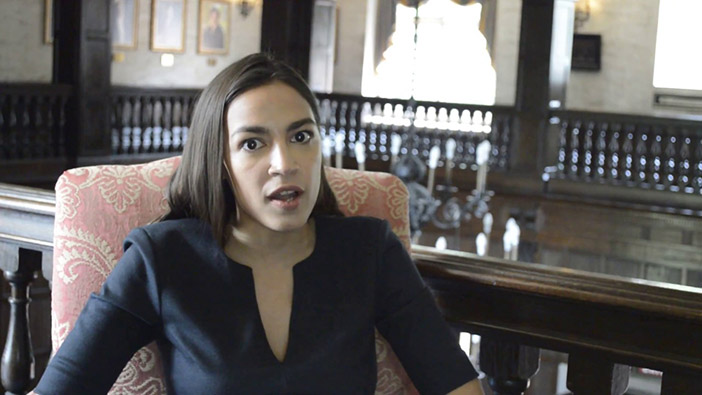 “First of all, ICE is not [U.S. Customs and Border Protection],” she said. “When we talk about abolishing ICE, we’re talking about ending family detention. We’re talking about ending an agency and ending a practice and a structure that is not accountable to the U.S. Department of Justice, that often takes on things that look a lot like enforcement activities.”

“We have to show people that we’re willing to walk the walk and put our money where our mouth is,” she added.

Despite ICE becoming a big target for progressives, Democrats are reluctant to go along with the position as it does not have much political backing.

Reps. Clay Higgins (R-La.) and Majority Leader Kevin McCarthy (R-Calif.) are crafting a “support ICE” bill that will be voted on the House floor on Wednesday.

The Jewish Voice previously reported on the congressional candidate, who has spoken out against Israel multiple times in the past. On PBS Firing Line, she was asked about Israel, and she called Israel an occupying force. After the host pressed her to elaborate on what she meant, ocasio-Cortez admitted she really does not not know anything about the topic.

During a weekly appearance on WNYC radio, the mayor said Ocasio-Cortez’s Tuesday triumph showed the Democratic Party the way to future success is taking “bold, clear progressive positions” and going “to the grassroots to organize,” according to the New York Post.

“It’s exactly the model Democrats need going forward,” the mayor said.” adding that “this reality is happening all over the country.”

De Blasio also had kind words for Crowley, saying the longtime Queens-based congressman “did a lot of good.”