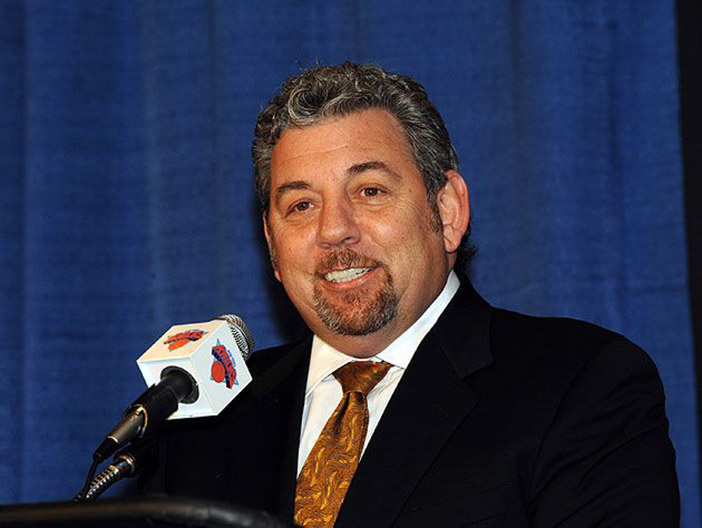 A report in Crain’s New York that speculated Madison Square Garden owner James Dolan “may be laying the groundwork” for a sale of the NBA’s New York Knicks and the NHL’s New York Rangers has both long-suffering fans and MSG shareholders riding high on Friday.

On Wednesday, The Madison Square Garden Co., which is the parent company that owns both franchises, announced that it may spin-off of the company’s sports businesses, which include the Knicks, the Rangers and the WNBA’s Liberty, The Wrap reports.

Investors seemed excited at the news as Madison Square Garden Company shares were trading up as much as nearly 3 percent as the trading week on Wall Street was coming to a close. Those numbers total to more than $8 per share for the day, but Wednesday’s close to Thursday’s open saw shares of MSG rise nearly 9 percent, The Wrap reports.

From Wednesday’s close to Friday’s high point, shares in MSG increased by a total of 20 percent over the course of a day and a half or so, which comes out to more than $50 per share.

During the last five days of trading, a lot else has happened, especially as rumours, speculation, and denials continue running rampant. While the release stated that Dolan is expected to be the CEO for the new company, the Crain’s story said that putting all of his sports franchises into a separate company makes it easier to offload them. The Madison Square Garden Company said in a statement to TheWrap, “There are no plans to sell the Knicks or the Rangers.”

Dolan may now be able to explore his interest in music. He’s passionate enough about music that he is the frontman for blues band called JD and the Straight Shot. As a man with money and power, he would be able to pair that with building entertainment venues where such music could be enjoyed by thousands and at a cost. MSG would remain the owners of the Madison Square Garden arena and its Hulu Theater, Radio City Music Hall, Beacon Theatre and the Forum in Inglewood, California, among others, The Wrap reports.

Dolan took over ownership of the Knicks in 1999 after assuming it. Following a run to the finals that year, the Knicks have otherwise managed to not only struggle on the court but make the organization look like a bunch of complete fools, especially during the Isiah Thomas era. Since 2001, the team has made just four playoff appearances, with only one series win, leaving plenty of fans eager for something better.

Dolan inherited the teams as part of the family business, and Deadspin suggests the move wouldn’t be a big surprise. In last November, Dolan said in poetry form “You know I own a basketball team. For most people that would be a dream. For a trust fund kid it’s a living hell. Always some ass hole telling me to sell.”

The Madison Square Garden Company has released a statement: “There are no plans to sell the Knicks or the Rangers.”