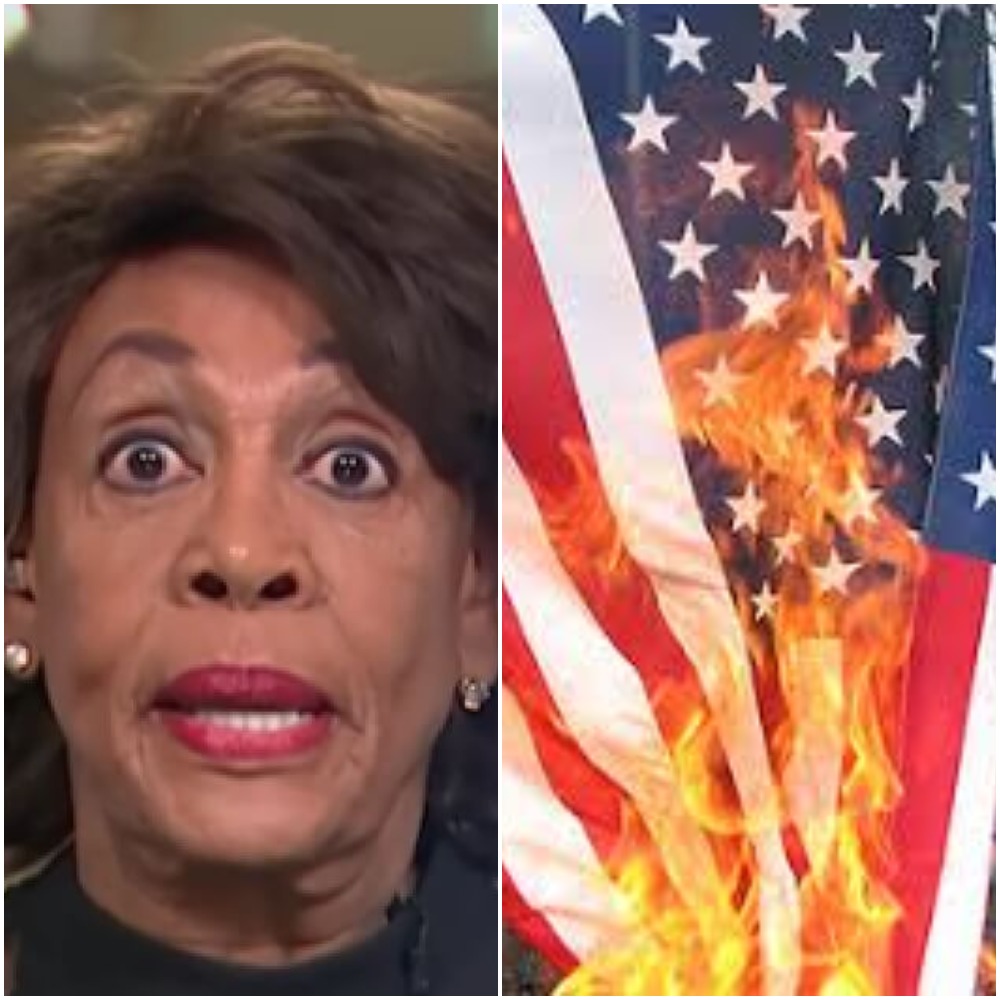 A small crowd congregated on Thursday outside the Los Angeles office of U.S. Rep. Maxine Waters, D-California to counter an expected protest by a fringe militia group and burned an American flag taken from the back of a pickup truck. The incident happened after the far-right Oath Keepers group didn’t appear at the office after saying it would rally against the congresswoman, CBS Los Angeles reports.

A group of counter-protesters there to support Waters were chanting “black power” and other slogans when the pickup truck came into the area.

The vehicle, occupied by two men who appeared to be white, was stopped by the crowd. Some marchers opened the doors and one grabbed the flag flying on a pole in the bed of the truck, which sped off, CBS Los Angeles reports.

The flag was stepped on and lit on fire as someone stoked the flames. A few people cheered and someone yelled, “This is not the American flag, this is their flag.”

No one was injured or arrested. Police wouldn’t immediately say whether they were investigating, according to CBS Los Angeles.

Attempts to reach a representative for Waters were unsuccessful. Ahead of the protest, Waters had warned counter-protesters to stay away. She said in a statement that the “Oath Keepers would like nothing more than to inflame racial tensions and create an explosive conflict in our community.”

“We’re not out here to hate and fight,” South L.A. community activist and mainstay “Sweet Alice” Walker told CBS Los Angeles. “We out here to show Maxine Waters we love her, but not to do nothing wrong!”

There was no sign of either Waters or members of the Oath Keepers group outside her Los Angeles district office, but the anticipation drew a huge crowd to 10124 South Broadway.

Protesters who showed up in support of Waters gathered under the watchful eyes of LAPD officers, but just before 1 p.m. an Oath Keepers representative told police the rally was called off, according to CBS2’s Dave Lopez.

“She is queen Los Angeles. If you don’t believe me, just ask anybody out here,” said one Waters booster.

“We’re not out here to hate and fight,” South L.A. community activist and mainstay “Sweet Alice” Walker told CBS2. “We out here to show Maxine Waters we love her, but not to do nothing wrong!”

Video posted to social media appeared to show a man reportedly wearing a Navy cap being “escorted to his car” by a large group of protesters, one of whom appeared to be holding the man by the arm.

“This guy in the navy hat showed up.He initially wouldnt tell people why he was here + people started to get physical with him. As he was being escorted to his car he told me he has a son in the armed service and was curious what this protest was all about but not an @Oathkeepers”

Some members of the crowd were heard shouting at the man as they lead him away. He denied on camera being an Oath Keeper, according to CBS Los Angeles.

A truck with the American flag mounted on the back was surrounded by protesters, who then reportedly pulled the flag off the vehicle and set it on fire, according to Oreskes, who said they were chanting, “F— the government, America was never great.”

Several other protesters took to a street corner chanting “Black Power!” as they raised their fists, which was widely shared on social media after it was captured on camera.

According to its website, the Oath Keepers call the group a “non-partisan association of current and formerly serving military, police and first-responders.”

The far-right group was reportedly planning to demonstrate at Waters’ offices in response to her call for people who are angry about the recent separation of families at the border to confront members of the Trump administration.

The Anti-Defamation League describes the Oath Keepers the following way: “The Oath Keepers are a large but loosely organized collection of anti‐government extremists who are part of the broader anti-government “Patriot” movement, which includes militia and “three percenter” groups,  sovereign citizens, and tax protesters, among others. What differentiates the Oath Keepers from other anti‐government extremist groups is that the Oath Keepers explicitly focus on recruiting current and former military members, police officers  and firefighters (although they accept anyone as members). The ideology of the Oath Keepers most closely resembles that of  the militia movement, whose adherents believe that the United States is collaborating with a one‐world tyrannical conspiracy called the New World Order to strip Americans of their rights—starting with their right to keep and bear arms. Once Americans are rendered defenseless, the theory goes, they too will be enslaved by the New World Order.”