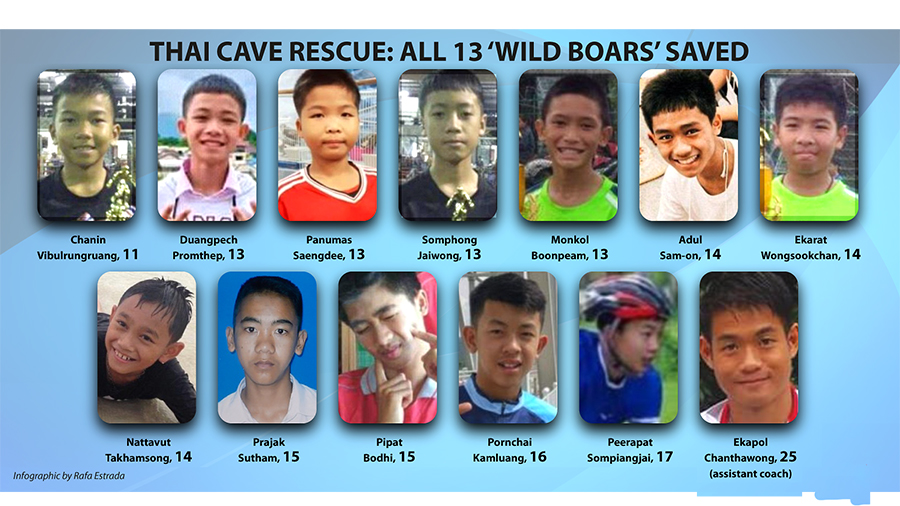 In nothing less than a spectacular miracle, all 12 boys and their coach have been pulled out of a flooded Thai cave where they and they had been trapped for more than two weeks, according to the Thai Navy SEALs.

“All 12 ‘Wild Boars’ and coach have been extracted from the cave,” a post on their Facebook page said, referring to the boys’ soccer team, the Wild Boars. The post added that all were safe and signing off with a “hooyah.”

A later post on Facebook said the last four Thai Navy SEALs had exited the cave safely, including a photo of the four — two of them giving a thumbs up to the camera.

Nineteen divers entered the cave at 10 a.m. local time Tuesday (11 p.m. Monday ET), many on their third mission in three days, with the aim of bringing everyone inside the cave out.

Tuesday’s rescue took nine hours in total, from the time the divers entered the cave to bringing out the boys and their coach.

The rescue happened on the third consecutive day of efforts to rescue the 12 players and their coach, who have been trapped in the Tham Luang cave complex since late June, a span of more than two weeks. Four boys were rescued Sunday, and another four guided to safety on Monday. The remaining boys and their coach were pulled out Tuesday.

Divers involved in the rescue described treacherous conditions, with fast-moving shallow water passing through very narrow passages, according to a CNN report.

“This is the hardest mission we’ve ever done. The lower the water is getting, the stronger the current. It’s stronger now. Every step of the extraction is risky,” said Narongsuk Keasub, a diver for the Electricity Generating Authority of Thailand.

He’s one of a group of divers whose job is to transport air tanks into the tunnels for the SEAL teams. Before the final rescue, he told CNN that divers inside the cave faced a number of challenges.

“We can only see our hands (at a) short distance. Secondly, the stones are razor sharp which is dangerous for our diving, (and) thirdly the passage is very narrow,” he said.

Tech entrepreneur Elon Musk had traveled to the cave site personally to deliver a submersible rescue pod that he and his team at SpaceX had re-engineered from rocket parts.

However, Narongsak Osatanakorn, who was heading up the rescue operation dismissed Musk’s solution during a press conference Tuesday. “Although his technology is good and sophisticated it’s not practical for this mission.”

The JPost reported that Israel’s Ambassador to Thailand Meir Shlomo went to the site on Saturday to see if and how Israel could help in the rescue operations. “I was asked by Prime Minister Benjamin Netanyahu to come and see how Israel can help its friend Thailand,” he said.

The report indicated that a Foreign Ministry spokesman said Shlomo went to the site to hear from the Thai authorities what their needs are, and that Jerusalem then offered its assistance according to what the authorities said they needed.

“Navy personnel examined the matter and truly joined the rescue effort. They found a possible solution and they [the authorities] will have to decide if it really fits the topography of the place,” Shlomo said, according to a Ynet report.

The JPost also reported that some of the emergency mobile communications tools used by the first responders have reportedly been donated by Israeli company Maxtech NetWorks.

CEO Uzi Hanuni said that Thai authorities had requested assistance from the company’s employee in Thailand.

“There’s a guy by the name of Assaf who lives in Thailand and he markets our systems,” Hanuni told Israel Hayom. “They approached him and said they want them. The systems facilitate communication in areas without reception. We gave them our devices and they took them into the cave. This is our Israeli contribution. We did it voluntarily.”

The JPost also reported that the lack of reliable communication tools hampered earlier rescue attempts. Maxtech doesn’t require a cell phone tower – and it’s being used as a lifeline for the boys to get data and video-chat with loved ones.

Because of the distance and depth – MaxTech’s devices communicate wirelessly between one another – one link at a time. It’s akin to beacons being lit one hilltop after another, gradually sending a message in a type of relay league, according to the JPost report.

According to a BBC report, Rafael Aloush, an Israeli living in Thailand and his son Shlomi travelled up from Udon Thani province.

Rafael has been cave diving before and went into Tham Luang cave 25 years ago, although he did not travel as deep as the boys.

“I’ve seen the mothers of the kids on TV and it just breaks my heart. I have to do something about it,” he said. He is volunteering as a diver and translator, while Shlomi, who is studying business management in Bangkok, also helped with translating.

The Israeli Ministry of Foreign Affairs reports that despite years of provocation, rocket attacks, and bombings, Israel defies terror organizations and works to uphold the highest standards of assistance and support to civilians everywhere, whether it’s in Asia, Africa, Europe, Iraq, or the West Bank and Gaza.

Israel has a heightened sense of humanitarian awareness and responsibility. With aid teams poised to respond in the wake of natural or man-made disasters anywhere in the world, Israel’s 200-strong relief team was the first on the scene in January 2010 after the earthquake hit Haiti. Israel helped save thousands of lives. In March 2011 following the devastating earthquakes in Japan, Israel was one of the first countries to send aid according to the needs and request of the Japanese government, and one of the first states to send a medical team and set up a field clinic.

By tragic circumstance, Israel is a world leader in handling mass casualties. No other country can dispatch search and rescue teams and field hospitals as fast and effectively.

Israeli efforts also include relief to New Orleans after Hurricane Katrina, and first response aid in the wake of the 2004 tsunami with 60 tons of international aid to Indonesia, and 82 tons of relief to Sri Lanka alone.

After the 2005 earthquake in Kashmir, the Israeli Flying Aid group sent a mission to give supplies and shelter for thousands of families. In 2009, Israel medical teams provided relief to storm victims in the Philippines and food aid a year earlier to the Congo.

Israel’s inclusion in the OECD, the 31-member economic forum, in 2010 demonstrates Israel’s commitment to upholding the highest levels of humanitarian commitment.

IDF aid missions help thousands around the world: Over the last 26 years, Israel has sent out 15 aid missions to countries struck by natural disasters. Immediately upon arriving in these countries, IDF doctors set up field hospitals. Overall, medical care was given to more than 2,300 people in afflicted areas, and 220 were saved from certain death.

Israel’s humanitarian efforts formally began in 1958, with the establishment of MASHAV, as the Foreign Ministry’s Center for International Cooperation, following the first visit of Foreign Minister Golda Meir to Africa. MASHAV assists countries striving to alleviate global problems of hunger, disease and poverty by providing technical training and sharing technology to improve quality of life. In the 1970s, Israel broadened its humanitarian aid agenda by granting safe haven to refugees and foreign nationals in distress–from Vietnam, Bosnia and Kosovo–and more recently from Darfur.

Israeli humanitarian and aid organizations include:

IsraAID (The Israel Forum for International Humanitarian Aid), founded in Israel in 2001, is an umbrella organization of more than 35 Israeli and Jewish non-governmental organizations and other individuals active in development and relief work around the world and concerned about global issues. IsraAID and its members have provided relief assistance to more than 20 countries including Rwanda, India, Mexico, Congo, Chad, Sudan (Darfur) and Malawi.

The Fast Israeli Rescue and Search Team (FIRST) is an Israeli NGO that sends search and rescue teams to disaster zones around the world. FIRST has also provided relief assistance in Peru, Turkey, India, Mexico, El Salvador, Greece, Armenia and New Guinea, among others

Save a Child’s Heart (SACH) is an organization that provides urgent pediatric heart surgery and follow-up care for children from developing countries. SACH was founded in 1995 and has since repaired the hearts of more than 2,100 children from a wide variety of countries including China, Congo, Ecuador, Angola, Ethiopia, Eritrea, Rwanda, Iraq, Jordan, Russia, Sri Lanka and Ukraine as well as to children in areas controlled by the Palestinian Authority.

LATET (Hebrew for “to give”)–Israeli Humanitarian Aid is an NGO established in 1996 and devoted to assisting populations in need in Israel and around the world on a universal and equal basis.