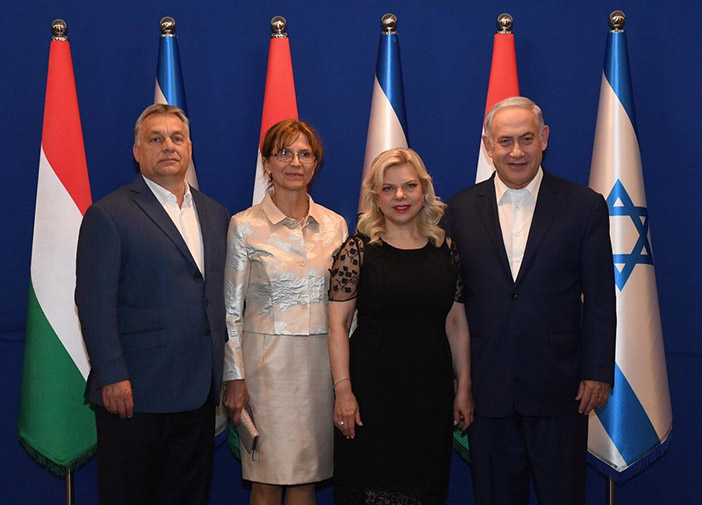 During the protest, sign-carrying demonstrators blocked Orban’s car, preventing him from leaving the memorial grounds while chanting slogans such as “shame on you” at the Hungarian premiere.

“I don’t think that you have to be a Holocaust survivor or a Hungarian to be here to say that Orban has no business coming here,” she said.

Among the sources of criticism leveled at the four-time Hungarian prime minister was his praise last year for Miklos Horthy — Hungary’s World War II-era ruler who introduced anti-Semitic laws and collaborated with the Nazis.

Some also argue that Orban trotted out anti-Semitic tropes in his criticism of billionaire philanthropist George Soros during his re-election campaign.

In denouncing Soros, Orban claimed that Hungary’s enemies “do not believe in work, but speculate with money; they have no homeland, but feel that the whole world is theirs.”

Prior to the protests at Yad Vashem, Israeli Prime Minister Benjamin Netanyahu welcomed Orban, calling him a “true friend of Israel.”

Orban and Netanyahu held a joint news conference in Jerusalem following the Hungarian premier’s arrival in Israel the day before.

“In Hungary there is zero tolerance for any form of anti-Semitism, and any Hungarian Jew is protected by the government,” Orban declared on Thursday. Orban also stated that his government is proud that Hungarian Jews can “openly and proudly celebrate their Jewish heritage and feel secure.”

In a related development, INN reported that on Friday, Hungarian Prime Minister Viktor Orban ended his trip to Israel with a visit to the Western Wall.

Wearing a dark hat in accordance with Jewish practice which says that men must not go bare-headed, Orban arrived at the Western Wall–the holiest place at which Jews are allowed to pray–accompanied by its Rabbi Shmuel Rabinowitz.

He placed a note in a crack between the wall’s massive stones in keeping with the tradition of slipping written prayers or requests in between the stones that were part of the Temple Mount’s retaining wall during the period when the Holy Temple stood.