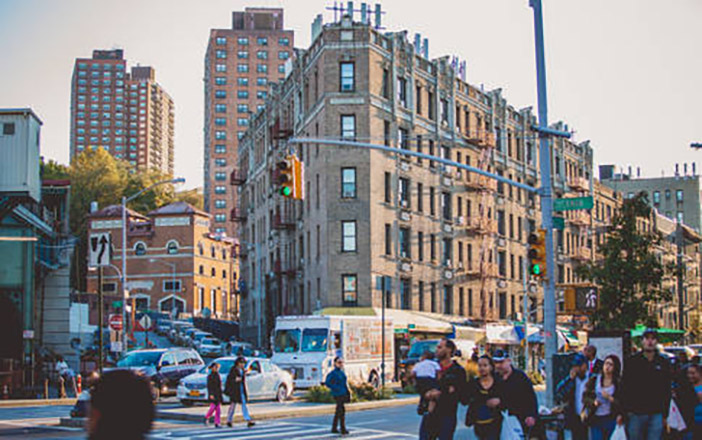 The neighborhood at the tip of Manhattan, overlooking the Bronx and New Jersey’s Palisades, over two different rivers, is going through changes.

Once a spot untouched by the growing spread of gentrification, a controversial city plan to reshape this enclave leaves locals wondering if they’ll be pushed out of the community they love, The New York Post reports.

“I wish it would stay hidden,” said Nayma Silver, a millennial who’s lived in Inwood since her family moved there more than 20 years ago.

Silver’s cherished memories include trick-or-treating at bodegas along Academy Street and Broadway, and volunteering to teach literacy at a McDonald’s on Dyckman Street, according to The New York Post.

“The rezoning would change the feeling of the neighborhood,” she said. “It wouldn’t feel like a home.”

The de Blasio administration wants to open new parts of Inwood to residential construction. He wants to encourage 4,348 new housing units over the next 15 years. A portion of them would have to be “affordable,” according to The New York Post.

The City Council is expected to approve the rezoning in early August, The New York Post reports.

But locals like Silver say the plan would drive up rents, force mom-and-pop shops to close and force longtime residents to find housing elsewhere. Fifty-three percent of the roughly 42,676 current residents are Dominican, with another 22 percent identifying as Latino from other backgrounds, according to The New York Post.

“It’s an ethnic cleansing,” Lena Melendez said. The 53 year old is part of am anti-rezoning group named Northern Manhattan is Not for Sale.

“We reject the notion that this is an ethnic cleansing,” said James Patchett, president of the city’s Economic Development Corporation. “I totally understand the concerns,” she said. She added that “we can’t do nothing because we’re afraid.”

Manhattan’s Democratic Borough President Gale Brewer is among the plan’s opponents, saying it needs more short-term benefits to locals. Her office estimated the rezoning could push out more than 150 independent family businesses, and many of those businesses are owned by immigrants, according to The New York Post.

“Small businesses are already being forced out because commercial landlords are not renewing their leases in anticipation of the rezoning going through,” Karla Fisk of the Inwood Small Business Coalition said. “It will result in mass displacement of people of color.”

The fate of the rezoning rests on the neighborhood’s Democratic councilman, Ydanis Rodriguez.

Rodriguez told The New York Post that while he supports rezoning to revitalize Inwood and increase housing, “the plan definitely should go through some modification” before the vote. He’d like more of the community’s concerns addressed, including disputes over use of public space, schools and the infrastructure needed to accommodate new residents.

Silver wants the city to put a moratorium on all pending rezonings to see the long-term effects of plans already approved for other neighborhoods. She worries Spanish-speaking residents haven’t gotten enough input, according to The New York Post.

“I feel like I’m being lied to,” Silver said. “Let Inwood be Inwood.”