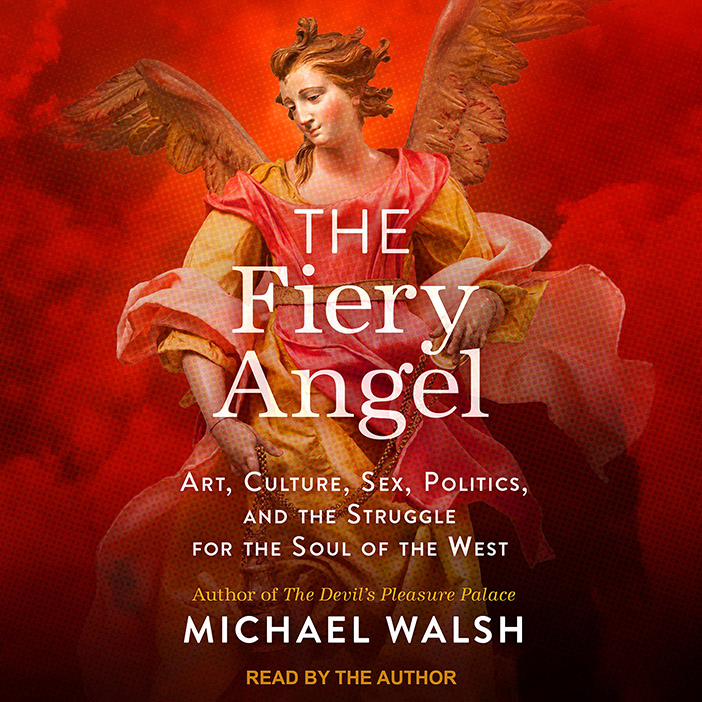 As Europe commits slow-motion suicide via a flood of Muslim migrants, and as Marxist mobs in America exploit the issue of immigrant family separation to advance their open-borders agenda, it is useful to step back from the hysteria and reflect on the bigger picture of the cultural history of the West and the inimical forces seeking to subvert it.

Michael Walsh’s compact new book The Fiery Angel: Art, Culture, Sex, Politics, and the Struggle for the Soul of the West provides that salutary perspective. A subtitle as grand as that promises a sweeping survey of the West’s artistic and intellectual heritage, as well as an insightful portrait of its enemies, and Walsh is one of the few writers who can deliver on that promise.

One would be hard-pressed to find another conservative intellectual, or intellectual of any political stripe, of Michael Walsh’s caliber. In terms of the depth and breadth of his familiarity with both high and low culture, only the iconoclastic Camille Paglia comes to mind as a rival. But Paglia isn’t also an American Book Award-winning novelist, journalist, distinguished classical music critic, and screenwriter. Walsh also writes political commentary for – among others – PJ Media, American Greatness, and the New York Post under both his own name and occasionally his alter ego David Kahane (Rules for Radical Conservatives: Beating the Left at its Own Game to Take Back America). He also happens to be a friend of mine, but my praise is not simple favoritism; his accomplishments speak for themselves.

Like its predecessor The Devil’s Pleasure Palace: The Cult of Critical Theory and the Subversion of the West, The Fiery Angel not only draws heavily from the storytelling realms of opera, classical music, and literature from Aeschylus to Wharton, but also includes a liberal (in the plentiful, not political, sense) dose of pop culture references from Amadeus to the Twilight saga. “This volume,” Walsh introduces the book,

seeks to illustrate, by means of artistic examples both high and low, an important and rarely remarked-upon truth: that the arts give the lie to the entire cultural Marxist project by recording and revealing timeless – and some particularly timely – truths about human nature…

What we find is a remarkable consensus about basic principles of right and wrong; of the proper, if imperfect, relations between the sexes; of the importance of children to the health and future of a culture; of the nature, meaning, and need for heroism. Seen in this light, the entire Marxist-Leftist venture crumbles into dust…

What is The Fiery Angel of the book’s title? It is the name of a Prokofiev opera produced in 1955 whose stark originality, blunt sexuality, blend of the real and supernatural, and “symphony of cultural references” prompted Walsh to choose it as an “optimistic symbol” of Western culture. “[O]ur job as audience members is to decode” the story’s meaning for ourselves, and similarly, “[t]his should also be our approach to our own history, which is not a dusty mausoleum of facts, periodically exhibited for our decreasing edification upon a mortuary slab, but is instead a ripping yarn that, in teaching us about the past, is also instructing us about the present and the future.”

Walsh’s dizzying erudition could be overwhelming if he were a less entertaining and enlightening guide. In any case, there is method to what another reviewer called his “chaotic brilliance”: “[B]y tracing artistic themes and connections backward through the ages we can, like Hansel and Gretel, eventually find our way home,” Walsh writes, for “the way forward might just be backward.”

Along the way, Walsh contrasts the intellectually disputatious nature of Western thought with the ruthlessly authoritarian impulse shared by the West’s principal contemporary enemies: Leftists and fundamentalist Muslims: “Marxism seeks to replace pluralistic discourse with its own form of coercive totalitarianism – socialism ‘with a human face.’ That the face is not human at all, but satanic, needs constantly to be pointed out…” And later in the book: “The key to understanding the Left… is that it (along with Marx and his successors), utterly rejects all previous historical facts and interpretations of history in order to proclaim its New World Order. In order to make that case, the unholy Left must needs overthrow and consign history itself to the ash heap of history.” [Emphasis in original] For the same reason, “the Left has severed the great works of Western art from their modern audiences.”

In a time in which the Left demonstrates such a zealous appetite for destruction, as the Guns N’ Roses album title goes, Walsh explains that “the modern international Left has… made common cause with resentful, reactionary Islam,” both “bent on the destruction of the West.” This unholy alliance, as David Horowitz calls it, is most recently evident in the Left’s outrage over this week’s ruling by the Supreme Court upholding President Donald Trump’s controversial travel ban, falsely deemed a “Muslim ban” by the Islam sympathizers of the Left. Walsh’s response in The Fiery Angel?

Western governments should make it clear that no further Muslim expansionism will be permitted. There is no rational reason for the cultural entity formerly known as Christendom to accept a single Muslim immigrant unless he – and it is almost always a “he” of military-service age – can be shown to possess useful Western skills, not to harbor anti-Western sentiments, not to have a criminal record or any infectious diseases, and not be a burden on the public trust. Wahhabist Islam is not an “enrichment” the West needs, nor one is should desire.

Walsh decries that “the West’s agnostic loss of faith in its institutions” has led to such defeats as the fall of English cities to Pakistani rape gangs and jihadis. “[H]eld prisoner by ‘tolerance,’ forbidden by ‘compassion’ to articulate a coherent defense, and in the thralls of the ‘diversity’ chimera,” Walsh writes, “Britain has found itself morally and politically defenseless. Like the vampire, Islam keeps coming back, as do all the enemies of the West and its civilization.”

As Walsh notes, “[t]here is literally no idea too stupid for the Left to conceive and believe, if not quite achieve, in its war against God, and against us.” Stupid, yes – and dangerous and destructive as well. But as Michael Walsh demonstrates time and again in his new book, in the epic battle between Good and Evil, our satanic enemies are no match for the West’s heroic spirit and irrepressible genius.

Mark Tapson is the David Horowitz Freedom Center’s Journalism Fellow on Popular Culture, and the Center’s Director of Marketing and Media.

‘A Jewish Guide to the Mysterious’ Explores Supernatural Phenomena