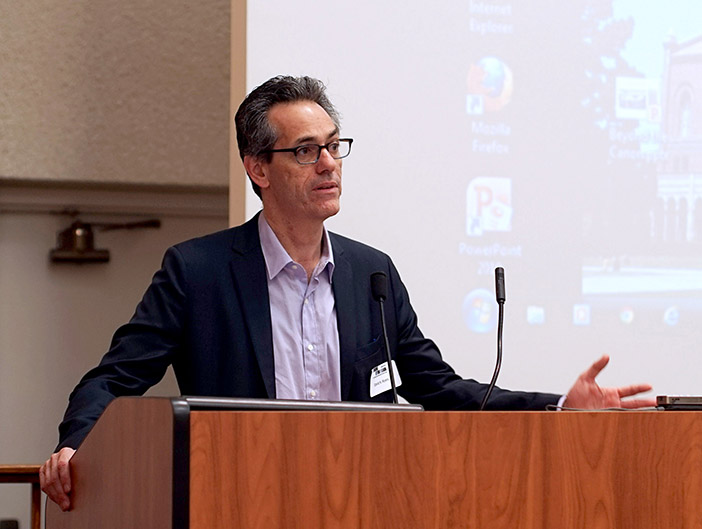 David Myers, the Center for Jewish History executive who alleges that he was targeted by Zionist activists last fall, is stepping down after only a year on the job, saying he wanted to return to his academic life in Los Angeles, The Forward reports.

Shortly after his appointment, Jewish activists called for Myers, the president and CEO of Manhattan’s Center for Jewish History to be terminated from his position over his links to rabidly left-wing groups, particularly the New Israel Fund. According to The Forward, Myers, who informed staff about his resignation on June 28, said that he is not leaving the CJH because of the campaign against him, which peaked last November.

“They’re nuisances, they’re gnats, they’re bothersome gnats like you find in the summer and swat away,” Myers said of the activists who attacked him. “They’re not people who compel life decisions.”

Democratic political consultant Hank Sheinkopf called Myers an “enemy of the Jewish state” last year. Sheinkopf helped lead the charge against Myers. The other, Ronn Torossian, who leads the public relations firm 5WPR, sent Myers a number of well researched emails demanding his resignation, according to The Forward.

Myers told the Forward that he was quitting the center to return to Los Angeles, where he teaches at UCLA and where his wife lives. “After a long and tortured deliberation, I realized that my home is Los Angeles,” Myers said. “This is the beginning of the final stage of my professional career, and a I had a very difficult choice between two things that I love.”

While starting his new job last July as president and CEO of the Center for Jewish History, Myers still taught at UCLA, where he had worked for years as a professor of American Jewish history. He had to fly back and forth weekly between New York and Los Angeles at times. “I would advise your readers not to do it,” he said, suggesting such a life was too difficult and hectic.

Myers will return full time to his old teaching job but will stay on in his capacities at the center until the end of August. “This is the result of months of deliberation spent on planes going back and forth and really asking myself, where do I want to be in life?” he said.

Although the center and Myers drew plenty of support from mainstream Jewish leaders and academics, the campaign against Myers appears to have shaken the Center for Jewish History, an umbrella group for five Jewish history organizations that it houses in its downtown Manhattan building, according to The Forward.

Myers is the second executive to depart in the past six months, following Rachel Lithgow, the executive director of the American Jewish Historical Society, who resigned after her board of directors cancelled a play and a panel under pressure.

In the email announcing his departure obtained by The Forward, Myers told his staff that he had realized that he needed to return to Los Angeles to focus on his academic work.

The Forward said that Myers is working on an academic book about the Satmar village of Kiryas Joel in suburban New York State, a project on which is he is collaborating with his wife, who is also an academic.