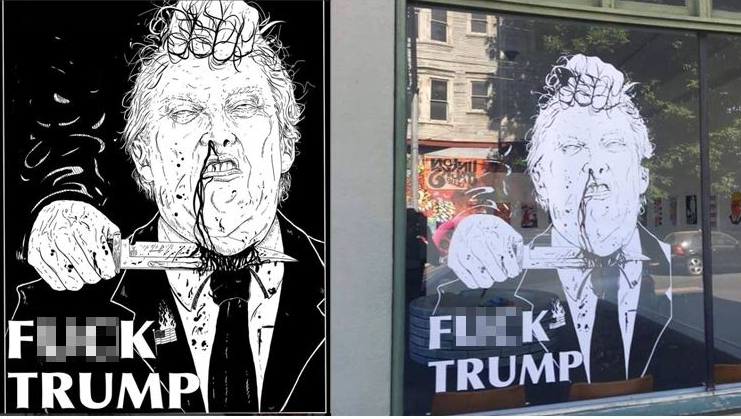 An art gallery in Portland, Ore., is facing backlash online after putting up a poster depicting President Donald Trump being beheaded in its front window, according to Business Insider.

Commenters went on to Facebook, Twitter, and Yelp on Tuesday after One Grand Gallery shared an image of the poster in a now-deleted social media post, Business Insider reports.

The graphic image features the words “F— Trump” and a drawing of the president with his head pulled back and a bloody knife at his throat, according to Business Insider.

The image was part of an installation at the gallery called “F— You Mr. President,” featuring nearly three dozen artists, according the the gallery’s Instagram page.

According to a man who identified himself as the One Grand Gallery’s founder, who refused to give his name and hid his face from a FOX 12 Oregon crew, continuous threats and a request from his landlord ultimately led to him removing the graphic image.

The man also declined to explain why the gallery put the image up in a window, which faces a public street and sidewalk.

Reporter Tyler Dumont asked “but, I mean, you felt strong enough to put this out here,” to which the unnamed gallery founder replied “yeah, but people that are responding, are responding with such anger and violence. People want the gallery to go up in flames with my family.”

The gallery, located at 1000 E. Burnside St., isn’t the only business to receive threats.

A worker at an unaffiliated automotive shop located one floor above the art gallery said the phone has been ringing off the hook all morning following the pictures spreading on social media.

“It’s been a crazy, crazy morning,” Dane Johnson of Total Performance Converters said. “I’ve had threats to have rocks thrown through the window. I’ve had threats that we’re never going to do business with you again. And I’ve also had threats on my life – you know, we’re going to come and kill you.”

Johnson said people from all over the United States called him.

On Tuesday morning, the gallery founder, who said the artistic organization was only a “hobby,” was scraping the Trump illustration off the window, but an identical image continues to hang inside, Fox 12 reports.

“People are angry about the picture that’s put up,” Johnson said. “I’ve had people say we’re going to call the FBI on you. We’ve reported you to the local police.”

As of mid-morning, a department spokesperson said the Portland Police Bureau had not yet received any complaints.

A U.S. Secret Service spokesman said the agency is aware of the gallery’s depiction of the president, but the Secret Service does not comment further about possible investigations, Fox 12 reports.