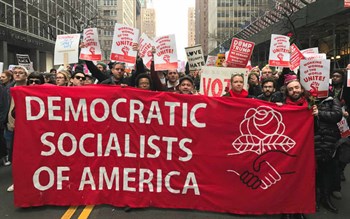 The American left continues to become more irrational and radical. This week saw an actual communist win a major congressional district in NYC, Maxine Waters, continue to call for harassing members of the Trump administration, Hillary Clinton and Joe Biden calling for  people to “rise up”, and now Michael Moore’s Colbert appearance.

Moore, who’s known for making politically charged documentaries like Fahrenheit 9/11, a 2004 film that was very critical of the Bush administration’s handling of intelligence about a potential Osama bin Laden-orchestrated terror attack pre-9/11 and the runup to war in the Middle East, said that the new documentary, called Fahrenheit 11/9, will hit theaters Sept. 21. While the title and some general concepts are similar to Fahrenheit 9/11, in what’s a happy coincidence when nine and 11 are flipped, the new movie’s title refers to the night Trump won the Electoral College in 2016.

The liberal filmmaker expanded on why he chose the movie title that he did. Speaking to Stephen Colbert during an appearance on The Late Show Thursday night, he said that the film “is about how the hell we got in this situation and how we’re going to get out of it.”

According to an official synopsis of the new film, “Michael Moore’s Fahrenheit 11/9 is a provocative and comedic look at the times in which we live. It will explore the two most important questions of the Trump Era: How the fu*k did we get here, and how the fuck do we get out? It’s the film to see before it’s too late.” Moore echoed the message to Colbert.

After the footage aired, Colbert asked Moore what he thought about calls for “civility” following Press Secretary Sarah Huckabee Sanders being politely and privately asked to leave from the Red Hen restaurant in Virginia because she worked for Trump and helped him defend positions harmful to some of the restaurant’s staff. Moore’s take was one of defiance, saying that “our side is constantly giving in,” adding that “we’re not talking about political differences, we’re talking about thousands of children being separated from their parents and put in jails.” His statements come in the same spirit as recent calls from Rep. Maxine Waters to harass officials in the Trump administration.

Moore said he cries every day while reading the news, saying that “the only way we’re going to stop this is that we’re going to have to put our bodies on the line,” he said that the reason he makes films is that he “thinks there is a chance.”

The GOP  released a  campaign commercial displaying the radicalizing of the Democratic party and American progressives in response to the insanity.  Since Trump’s inauguration, where cars were lit on fire &  Trump supporters were violently attacked and blocked from entering events, the rhetoric and actions of the left suggest a group hell bent on starting a Civil War. Pop star

Madonna fired the first salvo when she famously stated   “ I thought a lot about blowing up The White House”, followed by 2 solid years of violent Anti-Trump imagery in music videos, and nonstop threatening rhetoric against Trump and his family by Hollywood figures

Now you have a liberal film-maker calling for people to put “bodies on the line” to fight Trump on a late night talk show on national TV.

The left are now apparently calling for martyrs.