Tracing the History of Tel Aviv Through its Street Names

RFR Holding and Marriott International will open a 120-room luxury hotel in Jaffa on July 23. The Jaffa – a Luxury Collection Hotel will be housed in a renovated 19th century building on the corner of Yefet and Louis Pasteur Streets that formerly served as the French Hospital, alongside a new building designed by world famous London-based architect John Pawson and local architect Ramy Gill, according to a report on the Globes business site.

The new hotel, which will be named The Jaffa, a Luxury Collection Hotel, Tel Aviv, comprises a landmark building in ancient Jaffa, in addition to a new structure featuring contemporary design by John Pawson and local architect Ramy Gill.
“The property was originally earmarked as a W, but the construction process has taken much longer than we expected because…as we started the excavations and all of the work, the construction firm started uncovering all sorts of artifacts and historic parts of Jaffa City, which is a highly protected part of Tel Aviv,” said Anthony Ingham, global brand leader for The Luxury Collection and W Hotels. “It had a huge delaying impact on the construction of the hotel to be sensitive to the items that were being uncovered.”

The preservation and incorporation of those historical elements changed the design elements of the property. “When we were originally thinking about doing it as a W, we had a plan for the Living Room, which was going to be the arrival area of the hotel, which is a bar and a highly activated space in a W,” he said. “The space where the Living Room was to originally be, we uncovered a piece of the original wall of Jaffa—a 10-15-ft.-long, 8-ft.-high portion of the wall. It is now a feature of the Living Room of the Luxury Collection hotel.”

He continued, “As we got into it, what we found was that there was this extraordinary cloister in the middle that has been restored to look like the original cloister. Legally, protection-wise, we could have changed that space, but architecturally, it is too precious a space to not honor, so the cloister in the center has become a real focal point of the hotel. Then, there is an original chapel that was earmarked to be a nightclub. When we started work on this chapel, we uncovered original stained-glass windows and a hand-painted ceiling. You can convert it into a great destination experience, but it doesn’t lend itself to the kind of future-forward, modern approach that we take with W. It wouldn’t do this building and location justice.”

The hotel will include two restaurants by New York-based Major Food Group, a spa facility by L. Raphael and an outdoor pool and lounge.
Ingham said that the company is looking for other sites in Tel Aviv for a new-build style for a W.

The building’s owners are RFR Holding; a New York real estate company founded by Aby Rosen and Michael Fuchs. The hotel will be opened jointly by RFR and the Marriott, according to the Globes report.

“The Jaffa, a Luxury Collection Hotel, Tel Aviv is a fulfillment of many years of planning and personal involvement. We were excited to join forces with The Luxury Collection to debut an extraordinary property in Tel Aviv that respects its historical past, celebrates the culture and diversity of the country, and brings a six-star quality of design, services and amenities currently not seen in this city,” said Aby Rosen, Owner and Co-Founder of RFR Holding. “My goal was to invest in Israel’s future as an expanding international destination and to introduce world-class hospitality to this remarkable city.”

Aby Rosen is renowned for some of the most visible and successful real estate and hospitality projects, including the Seagram Building, Lever House, The Gramercy Park Hotel and most recently 11 Howard in New York City.

The Jaffa is one of Rosen’s most personal projects, whose connection to Israel goes back to his early days and family origins. The opening marks The Luxury Collection’s ninth property in the Middle East, signifying the brand’s commitment to expanding its footprint and serving as a destination authority in the most coveted destinations around the world.

Prices per night will range between $620 for a deluxe room, “Yediot Ahronot” reports, up to $6,000 per night for a large suite.

The Jaffa – a Luxury Collection Hotel is one of three boutique hotels that have opened in Jaffa this year. Last month the Nakash brothers opened the 120-room Setai in an historic building that served as an Ottoman prison and an Israeli police station, while this month the 42-room Drisco Hotel opens in a 19th century building in the American Colony on the seam between Jaffa and Tel Aviv. 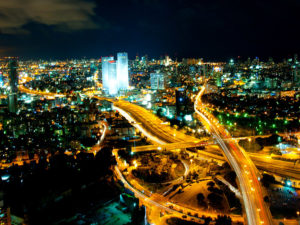 Marriott International is expected to announce in the coming days it plans to open 40 luxury hotels in 2018, a figure that will give it 422 luxury properties by the end of the year with some 200 more in the pipeline. The openings will include all of its luxury flags: The Ritz-Carlton, Ritz-Carlton Reserve, St. Regis, W Hotels, The Luxury Collection, EDITION, Bulgari and JW Marriott.

The company does not include Autograph Collection, a mix of four-and-five-star independent hotels in its count. By early in the next decade, the Bethesda, MD based lodging company should have more than 600 luxury properties.