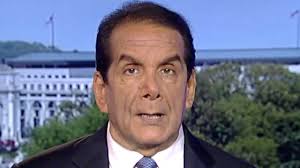 Charles Krauthammer, a Pulitzer Prize-winning Washington Post columnist who often wrote in support of neoconservatism that helped lay the ideological groundwork for the 2003 U.S.-led invasion of Iraq, died Thursday at 68.

The cause was cancer of the small intestine, said his son, Daniel Krauthammer. He declined to provide further information to The Chicago Tribune.

“I believe that the pursuit of truth and right ideas through honest debate and rigorous argument is a noble undertaking,” he wrote in a June 8 farewell note. “I am grateful to have played a small role in the conversations that have helped guide this extraordinary nation’s destiny. I leave this life with no regrets.”

The longtime columnist and intellectual’s death stemming from his terminal illness evoked widespread emotion and and outpouring of support from all walks of life.

“For decades, Charles’ words have strengthened our democracy,” former President George W. Bush said in a statement. “His work was far-reaching and influential – and while his voice will be deeply missed, his ideas and values will always be a part of our country. We send our thoughts and prayers to Robby, Daniel, and the entire Krauthammer family.”

“A huge loss to vigorous and civil debate on public policy,” Marty Baron, executive editor of The Washington Post said by tweet. Krauthammer’s work as a columnist earned him a Pulitzer Prize during his time at The Post.

While in his first year studying at Harvard Medical School, a diving board accident that severed Krauthammer’s spinal permanently paralyzed him from the neck down. After spending 14 months recovering in a hospital, he graduated to become a psychiatrist involved in the creation of the Diagnostic and Statistical Manual of Mental Disorders.

Krauthammer was born in New York to Orthodox Jewish parents, his father from what’s now Ukraine and his mother from Belgium. He even attended Hebrew school with his brother before going on to some of the most prestigious academic institutions in North America on his way to becoming the political and social commentary stalwart that he was to the conservative movement.