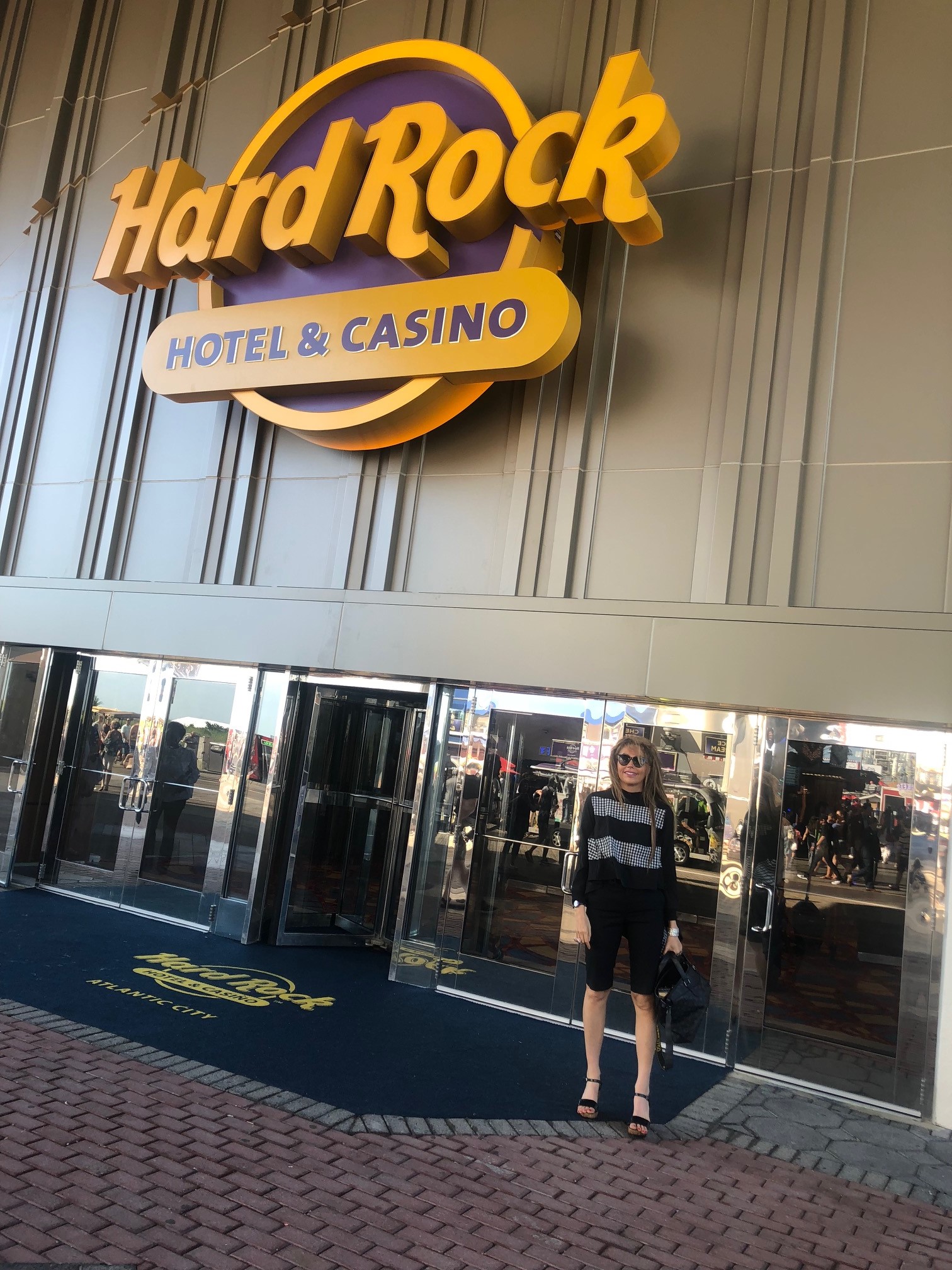 I had no idea what to expect on my first ever visit to Atlantic City as the reviews from my fancy friends were mixed-why would you go there they asked.  Despite my apprehension, I grabbed my heavy suitcase and camera and headed to Penn Station to grab a train.  Unfortunately, I misread the schedule and there were no direct trains on a Wednesday night.  Should I or shouldn’t I? It was close to 10 PM and I was more than a bit discouraged about whether it was worth the trip.  Heading to the Port Authority terminal I was told the next available bus was leaving in an hour and a half.  Vacillating as to whether to proceed I waited patiently next to a man who sounded like he had whooping cough and about ten pigeons who remained dangerously close to my suitcase.  I purchased a ticket for $21 and headed to the gate.  As the bus left the driver asked the passengers to refrain from drinking.  To no avail, the man in front of me continued to offer me and my seatmate sips from his vodka flask admitting that he had been drinking since way before departure.  I am slightly uneasy but mostly annoyed by this passenger who continues to chat my reluctant neighbor up.  We arrive at Caesar’s two hours later-my trip to Greenwich Village during rush hour takes longer-and I am left wandering the streets of Atlantic City at 2 A.M. with a suitcase and Louis Vuitton bag wondering if this is a precarious situation.  Finally I spot a Sheraton in the distance and for $150 a night I am brought to a lavish room replete with air conditioning and curtains (luxuries an $800 room in the Hamptons fails to provide.)

The next morning I excitedly headed to the casino openings of “The Hard Rock Hotel” and “The Ocean Resort” located on the Boardwalk.  I was astounded by the vast expanse of the Boardwalk and the magnificent beach it was attached to.  Amusement Park rides, Go Karts, and Food Trucks were sprinkled on the nearly three-mile walk which was teeming with enthusiastic crowds. “The Hard Rock Casino”, the 2,000 room behemoth which is located in the midst of the action, spent $500 million over the past 14 months to renovate the former Trump Taj Mahal.  Joe Gingoli, along with Jim Allen and Jack Morris otherwise known as the “Jersey Boys,” attended the day’s festivities.  Gingoli wearing a sharp grey suit and accompanied by bodyguards called the Hard Rock “a game changer” due to the 390 shows a year and the numerous theaters it contains.  Gingoli said the press reports about the demise of Atlantic City were wholly inaccurate and he was willing to bet big on the beautiful beaches and boardwalk. The morning festivities at “Hard Rock” consisted of greeting guests with the smashing of guitars, a performance by Jamie Foxx and massive fireworks.  Mark Wahlberg was also in attendance at both openings as well as Jamie Foxx and Michael B. Jordan.

Over the weekend a 36,000 Square Foot “Scores” Strip Club will be opening and both Carrie Underwood and Pitbull will be performing at the “Hard Rock.”  Atlantic City Mayor Frank Gilliam heralded the days events calling it “a new era” and remarking that Atlantic City was open for business.  In fact within the next couple of days more than one million people will head to Atlantic City to celebrate its reemergence as a gambling hotspot  The introduction of sports betting and the opening of Atlantic City’s Stockton University’s Beach Campus in September are signs that the lost jobs and casino closings during the last five years might be a thing of the past.  Five of Atlantic City’s 12 casinos closed between 2013 and 2106 and the unemployment rate of 6.3% was way above the national rate of 4% at that time.   Atlantic City was once the number one tourist attraction in New Jersey but as recently as July 23, 2017 “Business Insider” called it a “ghost town.”  It is hard to explain why developers have chosen to pour billions of dollars back into this risky investment with multiple nearby venues now offering gambling; however, since most of these renovations have occurred during the Trump Presidency one explanation might be the resurgence of the economy and the hope that people will start spending big again.

Hard Rock spreads its influence internationally arguably more than the rock stars themselves, without whom there couldn’t be a cool franchise like Hard Rock. The casino industry is mostly controlled by a few major corporations who are behind the branding of the many recognizable casinos, like in Las Vegas. They all have different names, but most are owned by Caesars Entertainment and MGM Resorts.

Atlantic City is no different with its casinos owned and backed by some of the biggest players in the industry. Hard Rock would seem to be no different, fittingly moving into the building that once housed one of a few casinos that made up Donald Trump’s boardwalk empire. The opening of these new casino resorts  is  giving hope to the down-on-its-luck city that’s been slowly recovering, but fully revitalizing the city may require more than just opening more casinos. Atlantic City needs someone who has a deep understanding and care for the city, not some executive just making another business deal. The man in charge of Hard Rock just may be that guy.

He got his start in Atlantic City as a chef back when the casinos just started to open. He found himself there, at the at-the-time brand new Bally’s at Park Place, because of proximity and a matter of circumstance.

His father died when he was 14, which made him want to support the family any way he could. He started washing dishes at a local pizzeria, and this early experience and desire to support the family stuck with him. “I didn’t have a lot of options,” he said in an interview a few years ago. “But I’m very fortunate,” he continued. “I happen to love work.” He added that he “was just a sponge looking for great opportunities.”

Allen used those experiences and successes to break into the casino, hotel, and gaming industries back in 1979. He wound up getting the cooking job at Bally’s because he happened to grow up in the nearby inland town of Linwood. Where an old streetcar line once ran, a rail trail now follows the right-of-way, linking friendly and pleasant neighborhoods filled with flowers and trees. An old station still stands on this trail that some kids now use to bike to the schools that are right next to the car-free, fully-paved trails. It’s a reminder of the changing times and what once was, not unlike the skeletons of the dead Trump Taj Mahal and Revel Resort being resurrected as Hard Rock and Ocean. Atlantic City has gone through booming times and hard times time and time again. By getting his start at the very beginning of Atlantic City’s casino era, he’s seen and lived through most of the era’s ups and downs.

Bally’s eventually put him a position where he could join a management training program through Bally’s. He started making his way through the ranks and doing great work at major companies like Atlantic City Hilton, Trump Organization, and Mohegan Sun. He branched out to do some work in Colorado and New Orleans too, where he broke ground for a new casino.

He’s won the casino marketing lifetime achievement award at a major casino conference. The award was established in 2004 to recognize individuals who have made “outstanding contributions in the area of casino marketing, promotions and customer service.” Now after opening the brand new Hard Rock Hotel and Casino, Allen is back home and ready to do all he can to make sure this new property helps bring Atlantic City back to its glory days, maybe eventually leading to another young service industry worker getting a chance to break into the business.

He mostly lives in Fort Lauderdale now but still has a home in Linwood with his wife, who is even on the Gilda’s Club South Jersey board of directors. With a new sprawling casino nearby that he helped make possible, he may want to spend more time back in Linwood now.

The Second Casino, “The Ocean Resort”, which was formerly called “The Revel”, cost $2.4 billion to build and closed in 2014 after only two and a half years of operation.  Glen Straub acquired the property out of bankruptcy in 2015 for $82 million and Colorado developer Bruce Deifik bought the 1,399 rooms in January for $200 million and proceeded to spend more than $200 million on a renovation.  The edifice was magnificent with glass enclosures that highlighted the beach and a casino that was on par with the best of Monte Carlo and Vegas.  I actually gasped when I rode up the escalators and looked out onto the magnanimous boardwalk.  Restaurants including Dolce,

Amada, Cafe 500 and American Cut as well as a hamburger restaurant owned by actor Mark Wahlberg called “Wahlburgers” and an over-the-top Food Court will draw culinary aficionados to this gambling site.  “Ocean Resort” will also contain a sports betting facility, golf simulator, burlesque club, spa and a 5,500 seat concert hall.  Some novelty features include “Cereal Town” which will serve cereal 24 hours a day and a giant fish tank.  Between the two casinos more than 7,000 people have been hired with room supply increasing by 30 percent and gaming space up by 41 percent.  When the clock struck 11 PM I ran to catch the two-hour express bus at the nearby station and took one last glimpse at the majestic “Ocean Resort.”  Atlantic City which was established in the 1800’s as a health resort has become a mecca of glitzy high-rise hotels and nightclubs.