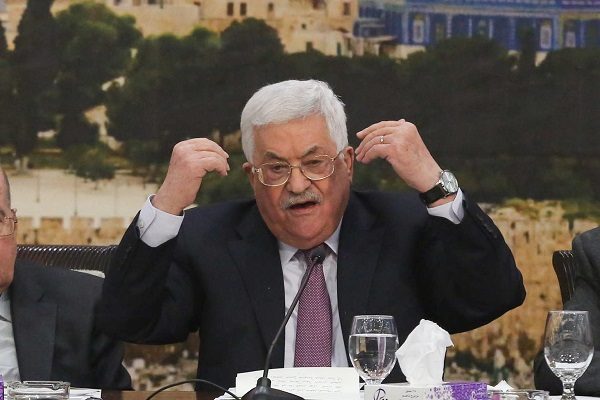 A New York Times editorial has called on Palestinian Authority (PA) head Mahmoud Abbas to resign following an anti-Semitic speech he delivered to the Palestinian leadership in which he alleged that the Jews’ own conduct caused anti-Semitism and that Jewish usury led to the Holocaust.

Under the title “Let Abbas’s Vile Words Be His Last as Palestinian Leader,” the Times’ Wednesday editorial said that by “feeding reprehensible anti-Semitic myths and conspiracy theories,” Abbas has “shed all credibility as a trustworthy partner if the Palestinians and Israelis ever again have the nerve to try negotiations.”

Giving a brief account of the failed peace process between Israel and the Palestinians, the article notes that “Abbas, who oversees a governing system plagued by corruption and dysfunction, has lost support among the Palestinian people. He has weakened government institutions that are essential for a future state and refused to call new elections, thus overstaying his term by many years and preventing younger leaders from emerging.”

The Times believes that the Palestinians “need a leader with energy, integrity and vision, one who might have a better chance of achieving Palestinian independence and enabling both peoples to live in peace.”

“Even in this gloomy climate, however, Mr. Abbas’s vile speech was a new low. No doubt he feels embittered and besieged on all sides. But by succumbing to such dark, corrosive instincts he showed that it is time for him to leave office,” the editorial declares.

Addressing the Palestinian National Council (PNC), the PLO parliament, in Ramallah on Monday, Abbas dismissed Israel’s existence as “a colonial project intended to plant an odd body in this region [Middle East],” but then claimed he was “not saying here that Israel should be removed. Israel exists, and all I want is a state so that we can live together in peace.”

He also discussed what he alleges were the causes of 20th-century anti-Semitism in Europe, claiming that his views are based on books by Jewish writers. “The conclusion of these books is that animosity toward Jews was not because of their religion, but because of their social activities,” including money-lending, he said, parroting common anti-Semitic tropes.

Abbas touched on a number of anti-Semitic conspiracy theories during what he called a “history lesson,” attempting to prove that the 3,000-year-old Jewish connection to the Land of Israel is false.

Citing Arthur Koestler’s book, The Thirteenth Tribe, which claims that Ashkenazi Jews are descended from Khazars, Abbas said European Jews therefore had “no historical ties” to the Land of Israel.

He went on to say that the Holocaust was not the result of anti-Semitism, but rather of the Jews’ “social behavior,  [charging] interest, and financial matters.”

Abbas further claimed that Nazi leader Adolf Hitler facilitated the immigration of Jews to Israel by reaching a deal with the Anglo-Palestine Bank under which Jews who moved to the British Mandate of Palestine could transfer all their assets there.

Abbas has been roundly condemned by US officials, the European Union, Israel officials, the Yad Vashem Holocaust memorial, UN officials, and even left-wing organizations that usually support him.

Also weighing on the egregious anti-Semitic canards being spewed forth from Abbas, U.S. Ambassador to Israel David Friedman said in a tweet: “Abu Mazen has reached a new low in attributing the cause of massacres of Jewish people over the years to their ‘social behavior relating to interest and banks.’ To all those who think Israel is the reason that we don’t have peace, think again.” (World Israel News)