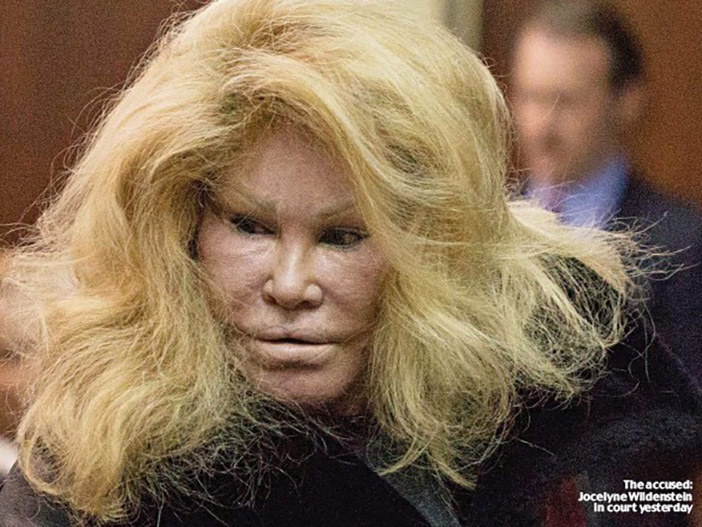 The strange socialite who’s plastic surgery made her face famously look like a feline is on the hunt for a lawyer, Page Six reported.

Jocelyn Wildenstein, has gone from billions to nothing. She claims she is short on funds because her ex-husband late billionaire Alec Wildenstein , gave her a fake painting by by Diego Velázquez and another painting by Cézanne that turned out to be worth much less than expected. Now Wildenstein says she’s planning on “suing the trust” to dig herself out of the red. She is planning on suing the trust fund to help her out of poverty.

She is listing her Citibank account balance as “$0”, according to the New York Post. “I am not employed and my only income is Social Security,I often turn to friends and family in order to pay my ongoing expenses”, she told the Post recently.

The French eccentric The French feline was married to billionaire art dealer Alec Wildenstein until 1999. She scored a $2.5 billion from the split but that bonanza is long gone. It is reported that she owns three adjoining apartments worth $11.75 million on the 51st floor of Trump World Tower, which are in foreclosure.

During her marriage with the billionaire, she was known for her extravagant and out of control spending. She told Vanity Fair, they spent around $1 million a month. During their divorce, he claimed her phone bill alone was $5,000 a month.

“I was extremely happy. I got a lifetime trust with millions in it. And that trust now is in default.” Part of the trouble is due to the fake Velazquez and underpriced Cézanne. “It was a false painting,” she told us. “When I put it up for auction at Sotheby’s, it was false. And another painting who was false of its evaluation during the divorce”, she told Page Six.

The feline lake woman was also recently arrested with her boyfriend Lloyd Klein, when a domestic dispute got out of hand. Her divorce from the late Wildenstein was not pretty either. Jocelyn walked in on her husband and a 19-year-old Russian model in her bedroom at the Wildenstein New York home, and he threatened her with a gun. Soon after they divorced.

She had the plastic surgery performed to make her look like a cat because Wilderstein was an aficionado of large cats and reportedly she still does not regret it.