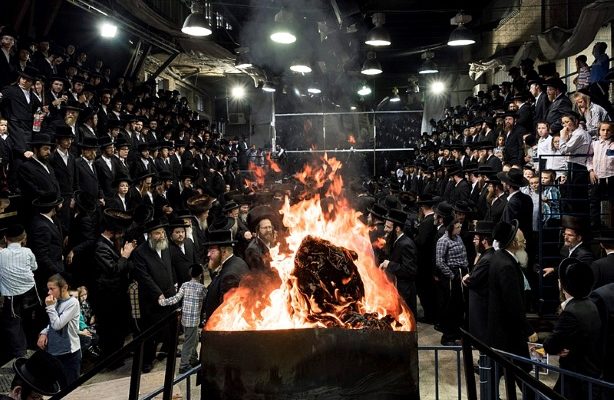 Hundreds of thousands of Israelis made a pilgrimage to Israel’s Mount Meron in the Upper Galilee on Wednesday night to visit the gravesite of Rabbi Shimon Bar Yochai.

According to tradition, Bar Yochai’s death occurred on Lag B’Omer, translated as “the 33rd day of the Omer,” which, according to the Hebrew calendar, is on the 18th day of Iyar. The Omer comprises a period of seven complete weeks starting from the second night of Passover and ending at the Jewish Festival of Weeks, known as Shavuot.

Many mark Lag B’Omer by visiting Bar Yochai’s gravesite as well as by kindling bonfires that symbolize the spiritual light brought into the world by the sage through his prominent Kabbalistic (Jewish mystical) work known as the Zohar, eventually compiled in Spain some 1000 or so years later.

According to tradition, Bar Yochai touched upon the mystical secrets in the Zohar as he and his son spent 12 years hiding in a cave. The Romans had recently quashed the Jewish rebellion and sentenced Bar Yochai to death for his opposition to the Roman Empire.

President and Founder of United Hatzalah Eli Beer, “Our volunteers, who have come from all over the country to assist in providing emergency medical care for those attending the festivities in Meron, are working around the clock in shifts until Friday morning.”

Due to the dry and hot weather with strong winds, many Israeli officials urged against lighting the bonfires for fear that larger fires may be ignited. The Israel Fire and Rescue Services even issued restrictions on Lag B’Omer bonfires, and several cities barred them altogether.

Some fires did break out in instances in which revelers were not careful.

On the local front, several Lag B’Omer bonfires took place in the Flatbush section of Brooklyn.  On East 15th Street, near Avenue R both scores of children and adults attended the annual festivities. The highlight of the evening was the joyous dancing around the bonfire and the special visit from the Kalischer Rebbe, shlita and his sons. A deeply pious Torah sage, the Kalischer Rebbe has made his visits to the Lag B’Omer bonfire for over 30 years. (WIN)

US hits Poland, others in Europe over Holocaust claims