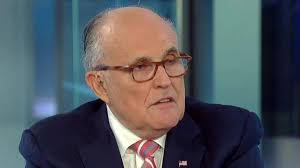 Rudy Giuliani said Donald Trump had indeed repaid the money used to buy Stormy Daniels’ silence about their affair, and that Trump had indeed fired then-FBI Director James Comey because Comey wouldn’t tell Trump that he wasn’t under investigation.   “Paying some Stormy Daniels woman one hundred and thirty thousand,” Giuliani declared that “is going to turn out to be perfectly legal. That money was not campaign money. Sorry I’m giving you a fact now that you don’t know. It’s not campaign money. No campaign finance violation.”

Giuliani’s remarks contradict what Trump has been saying, however if the money paid to Daniels’ was not campaign money, there was no wrongdoing. Legal experts are questioning however if the money which  was laid out by Trump’s lawyer Cohen and reimbursed  by Trump thru a legal retainer counts as campaign contributions.

Giuliani clarified the remarks on Hannity in a Wall Street Journal interview and said “Trump probably did not know about the payments”.

While discussing the Mueller probe, Giuliani  called Kushner disposable in terms of his administrative role.

“A fine man, you know that, but men are disposable,” Giuliani said.

The former New York mayor then asserted that the president’s daughter Ivanka was anything but, arguing the country would turn on Mueller if the First Daughter was targeted.

“But a fine woman like Ivanka? Come on,” Giuliani added.

Giuliani called the federal agents who raided Cohen’s Manhattan office last month “stormtroopers” towards the end of the interview. He also lashed out at Hillary Clinton by calling her “disgraceful liar” and called Comey a very perverted man”.

Anti-Trump media elites are foaming at the mouth in hopes Rudy said something possibly incriminating, and are feverishly rehashing over and over every word the former NYC mayor said on his various media appearances this week.

After 48 hours of media appearances, which many feel did not benefit the president, it remains to be seen what decisions Trump will make regarding Giuliani.