Time to Get Tough with Turkey - The Jewish Voice

Time to Get Tough with Turkey 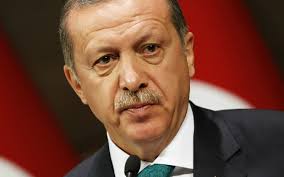 The Trump administration is trying to walk a fine line between Turkey, which it still refers to as a NATO ally, and our Kurdish allies on the ground in northern Syria, and it has become increasingly painful and disheartening to watch.

For the past two months, as Turkish troops have pounded civilians in the northern Syrian city of Afrin, Turkish President Recip Tayip Erdogan has verbally assaulted and taunted America.

After initially threatening to kill U.S. liaison officers working with the Kurds, Erdogan then warned the U.S. commander in Syria, LG Paul Funk, to beware an “Ottoman slap.”

The fact that U.S. commanders – undoubtedly under the direction of Defense Secretary Mattis – continued to avoid any direct contact with Turkish troops only emboldened Erdogan. Just before the final assault on Afrin last week, he taunted: “NATO members are not powerful enough to stand up to Turkey… [T]hey do not have the cheek.”

Once YPG fighters withdrew from Afrin on March 15, and civilians evacuated in the following days, Islamist militias backed by the Turkish army swooped into the city, destroying Kurdish cultural sites and plundering homes and businesses.

These were exactly the people the U.S. has been trying to defeat on the battlefield. And here Turkey has made them their allies and is training and equipping them.

As I argued in these pages two months ago, Turkey has long since stopped behaving like a NATO ally. It’s time that the Trump administration faced these facts and got tough on Turkey.

There can be no doubt that the appeasement policy carried out by the outgoing national security advisor, H.R. McMaster, and Rex Tillerson, has failed miserably. How deeply SecDef Jim Mattis buys into that policy could be a factor in his survival on the Trump team.

Erdogan is now threatening to unleash his Islamist allies on the remaining YPG strongholds further east, in Manbij, and even to push across the border into Mount Sinjar in Iraq to attack Iranian Kurds he considers to be allied to the PKK.

Earlier this week, General Mattis acknowledged that Erdogan’s blood-lust for the Kurds has brought coalition operations against ISIS strongholds along the Syrian-Iraqi border to a standstill, all the while he continued to call Turkey a “NATO ally” and spoke positively about “an open dialogue” with Turkey.

I’d call that surreal if it weren’t pathetic – and tragic.

The United States needs to stand by our allies. In this battle, there can be no doubt who they are: the Kurds, not Turkey. The Kurds have built a secular, pluralistic, democratic government in northern Syria, whereas Turkey has become an Islamist autocracy that compares itself increasingly to the Ottoman empire.

The Trump administration has much more leverage it can bring to bear against Turkey than the President’s generals would have us believe.

First, we can increase U.S. military support for the YPG, and draw clear red lines beyond which any advance by Turkey or its Islamist allies will mean a direct confrontation with the United States.

That is not a far-fetched proposal. After all, when a force of Russian mercenaries violated a similar red line near the Syrian-Iraq border last month, they were torn to shreds by U.S. artillery and aircraft, causing an estimated 300 Russian casualties. Since then, the Russians have kept their distance from U.S. forces.

Next, we can accelerate the disengagement from Incirlik airbase in eastern Turkey, as Germany has already done. This is the NATO airbase that Turkey refused to let us use in the first battle against Saddam Hussein in 1991, and again in 2003, and again more recently for strikes against ISIS. This is the base where Erdogan loyalists besieged U.S. Air Force personnel during the August 2016 coup, treating their NATO allies (us!) as a hostile, occupying force.

I have long argued we should withdraw from Incirlik and move those air assets to Erbil in Iraqi Kurdistan. Israel’s Debka.com believes such a move is already under way.

Next, the U.S. should go to NATO to seek sanctions against Turkey for violating the North Atlantic Treaty by conducting offensive operations beyond its borders without NATO approval and without having been attacked.

If Turkey does not withdraw from Syria and cease threatening Iraq within ten days, NATO should impose a series of increasingly severe sanctions against Turkey, starting with the suspension of all military cooperation and military sales to Turkey.

If Turkey still does not comply, NATO should suspend Turkey until it does.

After these NATO sanctions go into effect, and if Turkey remains defiant, the U.S. should seek United Nations sanctions against Turkey’s banking and defense sectors, neither of which is prepared for sanctions.

The U.S. can also unilaterally impose sanctions on Turkey as an ongoing money-laundering concern, based on the recent conviction of Turkish bank officials in New York for laundering money on behalf of Iran. (USA v. Zarrab et al).

Most powerful of all, however, would be for the U.S. to declassify intelligence information detailing the corruption of the Erdogan family, an investigation that proved so embarrassing to Erdogan that he launched a broad crackdown against judges and police investigators in December 2013 to shut it down.

The U.S. could also release intelligence information about the role of Erdogan’s son as a conduit for ISIS oil sales, and of Erdogan’s daughter role in setting up hospitals just inside Turkey’s border with Syria specifically to treat wounded ISIS fighters.

Put simply: ISIS would not exist, and never would have become as powerful as it became, without the active assistance of the Turkish president and his family.

Turkey is not behaving as a NATO ally, and is actively seeking to revive the Ottoman Empire and its Islamic Caliphate. With combined pressure from the U.S., NATO, Saudi Arabia and other allies, escalating pressure can be brought on Turkey to change its behavior or face the possibility of economic collapse. (Front Page Mag)