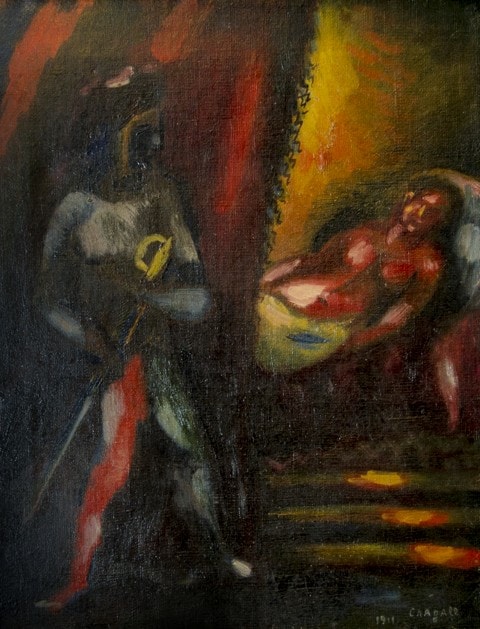 Since 1988, the robbery of an exclusive art collection built up over a lifetime from a 16th-floor apartment on Manhattan’s Upper East Side has remained unsolved. Over a dozen paintings by famous artists including Chagall, Renoir, Picasso, Léger and Hopper, as well as antiquities from Peru and Costa Rica, jewelry and even rugs, were stolen from an elderly couple’s 57th Street apartment while they were on vacation. The buglers didn’t leave a trace, and investigators failed to recover any of the pieces or make any arrests for the last 30 years.

Then finally on Thursday morning, April 12, a complaint was filed by federal prosecutors in Washington, D.C., seeking forfeiture of the painting on the basis that it represents the proceeds of the interstate transportation of stolen property and possession of stolen goods. The oil-on-canvas depicting Othello in the left foreground holding a sword in his hand and looking at a female figure, Desdemona, lying on a bed in the right background was paint in 1911 by Marc Chagall and titled “Othello and Desdemona.” It has apparently been sitting in an attic in Maryland for many years.

It now is in the possession of the FBI and is currently being held at an FBI facility in Washington, D.C. This piece was previously displayed at an art gallery in Switzerland in the 1960s.

“For nearly 30 years, this magnificent painting was in the control of people who had no legal right to it,” said U.S. Attorney Liu. “It was stolen from New York collectors who had owned it since the 1920s, and they never saw it again. Now, thanks to the tireless efforts of the FBI, it has been located and will be returned to the collectors’ estate. This case shows that law enforcement will never stop its dogged pursuit of justice, and will do all it can to recover stolen treasures.”

“As the FBI returns this painting to the estate of its proper owners, we do so with the purpose of preserving history,” said Assistant Director in Charge McNamara. “This piece of artwork is of significance not just for its monetary value, but for its place in the world of art and culture. The FBI continues to commit investigative resources to recover cultural property.”

According to the complaint, the painting had been rightfully owned by Ernest and Rose Heller, art collectors who lived in New York. The Hellers, who are now deceased, had amassed a collection of artwork from their travels in Europe and other parts of the world. By 1988, they had collected more than 20 paintings and 12 sculptures, which they kept in their apartment.

In August of 1988, they came home to their apartment and discovered that the painting, along with other artwork and sculptures, had been stolen. The piece by Chagall had a label indicating that its owners were “Mr. + Mrs. E.S. Heller, New York.” The property was insured by an insurance company, which paid the Hellers a lump sum following the theft.

Following the burglary, Interpol listed the Chagall painting as a stolen artwork. An FBI investigation revealed that the painting was stolen from the apartment by an individual who worked in the building.  That individual was convicted in a federal district court of interstate transportation of stolen property and mail fraud related to the theft and sale of other works of art stolen from other apartment buildings.  Prior to the arrest of this individual, he attempted to sell the painting to a third party. That third party took the painting from the suspected thief in the late 1980s or early 1990s.

After that, this third party attempted to consign the painting to an art gallery in Washington, D.C., but without proof of ownership, the gallery refused to accept the painting.  The gallery suggested that the individual contact law enforcement, which resulted in the FBI obtaining custody of the painting.

Upon completion of the forfeiture proceedings, the painting will be returned to the Rose Heller estate.  At that time, and in consultation with the insurer’s representative, Art Recovery International, the painting will be sold at auction. The Heller estate will repay the insurance company for their disbursement from the proceeds of the sale, pay any related legal expenses, and donate the remainder of the sale proceeds to the estate’s beneficiaries: the McDowell Colony, a haven for artists in New Hampshire (80%), Columbia University (10%), and NYU Medical Center (10%), all 501(c)(3) tax-exempt non-profit corporations.

News outlets quoted Ernest saying that he especially liked the Chagall. At the time of the theft, he said, “It’s all in the hands of the police. Sometimes they’re (stolen paintings) returned but I doubt it.”

Although the couple didn’t live to see their prized possession returned, at least the painting is finally in its rightful place and can stand as part of the Heller’s legacy.