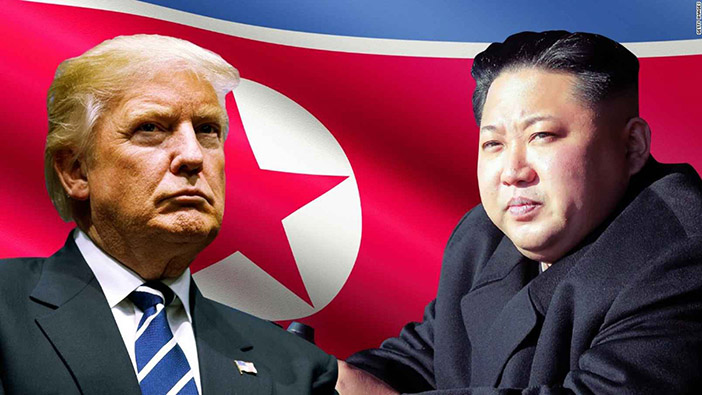 The rot at DOJ runs deep

The buzz about President Trump’s possible meeting with North Korean strongman Kim Jong-un has been followed by the usual Trumpophobe disdain matched by Trumpophile enthusiasm. But if this recent talk of an unprecedented presidential face-to-face negotiation with Kim turns into a reality, don’t expect much other than photo-ops and diplomatic clichés like “progress” and “productive,” with nothing meaningful accomplished. The Kim dynasty has been playing this game for three generations, and have become masters of exploiting the West’s diplomatic magical thinking that talk alone can stop a determined aggressor.

We know that Trump considers himself a master negotiator, eager to solve intractable foreign policy conflicts. Getting the Norks to denuclearize would be “the greatest deal in the world,” as the president said, something he reminds us his three predecessors could not accomplish. Perhaps the time is ripe. Kim may be feeling pressure from economic sanctions, especially since China has supported U.N. sanctions on their regional pit-bull. Or maybe Kim takes seriously Trump’s “fire and fury” threats, considering that the unconventional Trump may be a Nixonian “crazy” man who just might act on his bluster.

But as a perusal of the history compiled by the Arms Control Association shows, the canny Kims have survived over three decades of sanctions and saber-rattling rhetoric, participated in numerous negotiations and summits, and signed a plethora of agreements they have serially violated. Their aim has been clear throughout: possession of nuclear weapons that can be delivered on missiles capable of reaching the U.S. The vague “concessions” and “concrete actions” expected of the North before talks can begin, not to mention the suggested goal of the talks that North Korea gives up its nuclear weapons, are highly unlikely to be forthcoming.

And from Kim’s perspective, why should he? His big brother, China, may nudge him a bit, but the Chinese are unlikely to abandon a powerful geopolitical weapon that discomfits their great-power rival. The collapse of the Kim regime would create chaos on China’s border, and a unified democratic Korea would be a blow to China’s program of displacing the U.S. in the South China Sea and the whole western Pacific. More important, Kim (and Pakistan and nuclear aspirant Iran) learned the lesson of Muamar Gaddafi’s surrender of his nuclear program. Thanks to the Obama-Clinton massive blunder of removing Gaddafi from power, the Libyan strong-man ended up dead after suffering an iron-rod enema.

Then why is Kim now entertaining talks with the U.S.? He can relieve some of the pressure from China, who is no doubt annoyed by his bellicose braggadocio, which complicates China’s regional designs. He can bask in the international prestige that comes from sitting as an equal across from the president of the world’s greatest power, especially if the talks take place in D.C., with all the photogenic pomp and circumstance of a state visit. As the North has done before, Kim may wring a concession from the U.S., such as offering an unverifiable halt to his missile development in exchange for sanctions relief. Or he could have the Americans turn down his demands, like withdrawal of U.S. troops from South Korea or normalization of relations, after which he could claim that he came to the table in good faith, but was blocked by U.S. intransigence and arrogance.

In other words, even if the talks materialize, the outcome for Kim is likely to be a win for him, and a humiliating blow to Trump’s reputed prowess at deal-making. Meanwhile, as the North has done for over two decades––getting “carrots” while the U.S. is smacked with “sticks”–– the whole spectacle will buy Kim time to progress ever closer to his goal of being able to threaten the U.S. with nuclear-tipped missiles.

From a broader historical perspective, this latest act in the North Korea farce reveals the fundamental weakness of the West’s foreign policy ideals. For over a century the West has believed that a universal human nature craves all the goods that the advanced West has achieved: peaceful coexistence with neighbors, leisure and prosperity, human rights, political freedom, secular tolerance, and the resolution of conflicts by diplomatic engagement and negotiation. Thus non-lethal signed agreements or economic sanctions, enforced by transnational institutions like the U.N. or the International Atomic Energy Agency, can resolve interstate conflicts without resorting to the “exorbitant risks,” as Kissinger put it, and politically toxic use of armed force.

But this ideal assumes that all the diverse countries of the world, with their different cultures, mores, and interests, value peaceful coexistence or “win-win” cooperation as much as we Westerners do. Some do, but more do not. That thinking is the age-old mistake of interstate relations––the failure of imagination that keeps us from understanding mentalities and motives different from ours. We don’t want to admit that there are regimes, and even cultures, that prefer violently satisfying their own interests or irrational passions to our notions of peace and prosperity through mutually beneficial cooperation.

These delusions are especially dangerous when the conflict is with a ruthless, maybe psychopathic aggressor, particularly one who knows us and our cultural ideals better than we know his. Aware of our fetish for words and process over risky force and action, he can manipulate diplomatic engagement to buy time and extract concessions until he can achieve his aim. Unless his mind is concentrated otherwise by force, he will not be deterred by the overwhelming military advantage of his enemy, since he judges from his foe’s behavior that he has no will to act.

He also knows that political leaders in a constitutional government, unlike an autocrat––who can command his country’s forces and aims without check or accountability––are constrained by law and ballot-box accountability, and are often unwilling to pay the political price for military action. So those leaders will resort to diplomatic “engagement” as a way to stall––Obama’s euphemism was “strategic patience” –– until it is some other elected official’s problem.

This set of beliefs, serially repudiated by the blood-stained history of the last two centuries, has maintained a fierce grasp on the minds of our foreign policy establishment. And it has been for the most part bipartisan received wisdom. Some may want to blame Obama or Bill Clinton for the mess in North Korea, but Bush junior and senior made their contributions. Even more depressing, we have in the historical record, especially in the decades leading up to World War II, monitory examples of this dynamic. But astonishingly, it didn’t keep Barack Obama from repeating that sorry history in his agreement with Iran, which has followed the North Korea playbook faithfully, and is on track to duplicate the Nork’s success.

We’ll soon see if Trump’s gambit reprises the sorry history of “engagement,” or is a move in some deeper strategy, or is just another public relations feint to distract the Trump-obsessed media. But if he is sincere, let’s hope he knows that the North Korea engagement game is rigged, and that negotiating with a ruthless autocrat is light-years from dickering with the toughest CEO.

Bruce Thornton is a Shillman Journalism Fellow at the Freedom Center, a Research Fellow at Stanford’s Hoover Institution, and a Professor of Classics and Humanities at the California State University. He is the author of nine books and numerous essays on classical culture and its influence on Western Civilization. His most recent book, Democracy’s Dangers and Discontents (Hoover Institution Press), is now available for purchase.