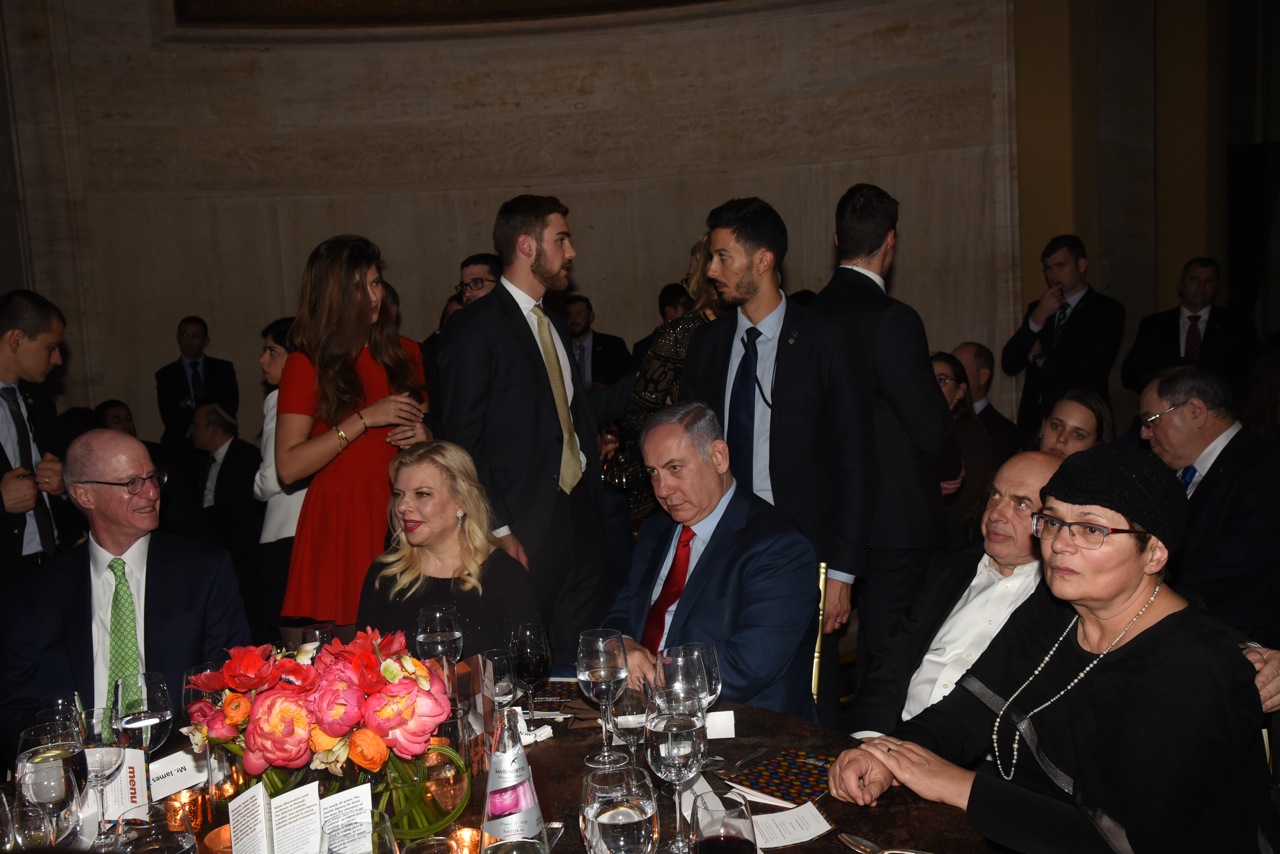 “They call me Anatol in prison I do lie”-I can still remember singing that song in elementary school and listening lugubriously to the story of Natan Sharansky who was languishing in jail for no other reason then wanting to be a practicing jew.  On Wednesday March 7th 2018, at Cipriani 25 Broadway I had the privilege of attending an evening celebrating his release from prison more than 30 years later and the conclusion of his tenure at The Jewish Agency after nine years of service.  Sharansky was born in the Soviet Union in 1948 with a degree in applied mathematics.  In March 1977 he was arrested on multiple charges including high treason and spying for the Americans and sentenced to 13 years of forced labor.

In prison his health deteriorated to the point of near death; he kept himself sane by playing chess in his head-he was a chess prodigy even beating Garry Kasparov in a simultaneous exhibition in Israel in 1996.  Through the help of an international campaign led by his wife Avital he was released from jail in February 1986 as part of a larger exchange generated by Ronald Reagan pressuring Mikhail Gorbachev.  That Sharansky has not only survived but thrived in multiple arenas is miraculous.  I could never imagine I would be taking pictures of him and his wife Avital at a dinner in Cipriani thirty years after his detainment.

There was a palpable excitement in the air heightened by the extraordinary guest list which included Prime Minister Netanyahu and former President George W. Bush.  There were also your average super-billionaires including Sheldon and Miriam Adelson, James Tisch and Ira and Ingeborg Rennert.  To have a sitting Prime Minister attend a dinner with a former President is quite extraordinary and the Secret Service seemed slightly overwhelmed.  The evening opened with a beautiful rendition of the song “Al Kol Ele” by Ania Bukstein a Russian immigrant who arrived in Israel at the age of 8 where she said she felt reborn.

Ania thanked Sharansky for leading the way for Jews to enter the land of Israel where they now comprise over one million of the population.  James Tisch, CEO of Loews Corporation and the dinner chair, thanked the 500-person crowd for attending despite the nasty storm.  Tisch recounted the history of the Jewish Agency which 90 years ago was led by Ben Gurion and was up until today headed by Sharansky.  He thanked Avital for her efforts in freeing

We were then shown a film where Sharansky said he grew up without any Jewish identity and surprisingly remarked the biggest threat to the Jews was themselves.  The film spoke of the Agency’s new Shlichut Institute which trains students to be great emissaries by providing them with the tools and technology to connect Jews around the world to Israel.

Another great shaliach of the Jews, Rabbi Avi Weiss, spoke movingly about the struggle to free Natan and how Avital would light oil instead of candles on Friday night because she hoped a miracle akin to Chanukah would attain Sharansky’s release.  Weiss then led the crowd in singing “Am Yisroel Chai” an extremely apropos melody.

We were then treated to a fascinating panel where Paula Zahn moderated a discussion between Sharansky and Bush on democracy and freedom.  Sharansky thanked President Bush for meeting with 100 dissidents when he was President.  Sharansky said one of his best days in prison was reading the newspaper Pravda where Ronald Reagan called Russia “the evil empire.”  Bush denounced the current government in Russia remarking that it was not really a democracy as there was no independent media and joked that he would be popular too if he owned NBC.  Sharansky countered with his observation that on the good side Putin loves jews but on the bad side Russia is retreating from developed democracy.

However, Sharansky noted there was still no KGB controlling 200 million minds and no gulag; in the current Russia people are able to speak their mind freely in the town square as long as they don’t criticize the leaders.  President Bush had the audience in stitches when he recounted introducing Putin to his dog Barney, a pet whom he said nobody liked.   One year later Putin introduced Bush to his dog and Putin said his dog was bigger stronger and faster than Barney. Bush joked that Barney was dead and voting absentee.  He also said his father was doing well but not speaking much with his mother doing much of the talking. Bush took a hard stance against Putin saying he had a huge chip on his shoulder.  Bush remarked, “Putin is a zero sum thinker; I win and you lose.”

He also remarked Putin was pleased to see the disruptive elements in the American election as everything he does is poised to diminish America.  Bush said Iran was a great danger to Israel and other allies in the Middle East because while they have changed their spokesmen they haven’t changed decision makers-the unelected mullahs are still in place.

Speaking of Iran, Netanyahu who has made it his mission to speak out against the terrorist regime, did so again tonight.  Netanyahu began by thanking President Bush for his 8 years of friendship and support and for defending freedom around the world.  He also extolled Sheldon and Miriam Adelson calling them “the greatest philanthropists in the world”.  I have never had the opportunity to hear the Prime Minister speak in such an intimate setting and he is absolutely spellbinding.  There is no greater orator I can think of who speaks without notes.

Netanyahu had the audience mesmerized when he spoke of Sharansky telling him that when he would hear a plane go by in prison he would think of Netanyahu’s brother, Yoni, and Entebbe and know he was not alone because of the Jewish State.  “Yoni’s courage inspired you and your courage inspired me”, exclaimed Netanyahu who recounted Sharansky defying a Kangaroo court in Russia by declaring “next year in Jerusalem.”   Netanyahu said at the time when the Soviet Union was a communist regime he and Sharansky thought Russia was a hollow empire that looked strong on the outside but was weak on the inside.

Netanyahu felt a strong sustained leadership of the West could win a Cold War and that’s what they proceeded to do with President Reagan and Secretary Schultz who Netanyahu called  “magnificent” leading the way.  “If you press hard enough they will crack,” Netanyahu told the wife of Andrei Sakharov who feared he would die in prison.  He then compared Russia to the Iranian regime which also oppresses its people and terrorizes its neighbors.  “Iran too has a hollow core and if you press them they will crack,” exclaimed Netanyahu.

He exhorted the audience to honor Natan’s legacy by supporting the young people in Iran fighting for freedom.  He concluded by describing the day Sharansky zigzagged across the bridge to freedom in the morning and ended the evening carried on the shoulders of “our people” to the Western Wall.  He praised Sharansky for campaigning for all those left behind in the iron curtain after he was freed.  “Nine years in prison, nine years in Politics and nine years in the Jewish Agency, I don’t know which were more excruciating,” joked Netanyahu.

While Netanyahu is currently under fire in his country he has made an indelible impression on his visit to the United States.  When Sharansky concluded the evening he thanked those who had braved the storm and Netanyahu who was “facing many storms,” a joke Netanyahu didn’t seem to hear.  The night ended with Sharansky dancing enthusiastically while accepting a chess board from the legendary Garry Kasparov – the ultimate conclusion to a once-in-a-lifetime evening.