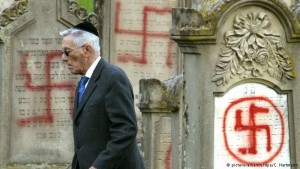 An 85-year-old Holocaust survivor’s body was found burnt and stabbed inside her Paris apartment in an horrific anti-Semitic attack , Israel National News reported.

Authorities have a suspect, her  35 year old Muslim neighbor who the victim knew since childhood.

The National Bureau for Vigilance Against Anti-Semitism (BNVCA) said the body of the woman, identified only as Mireille K., was set on fire Friday night. Her charred body also had at least 11 stab wounds. Police have a suspect in custody in connection with her death.

“For the Jews of France, the nightmare continues. 85-year-old Holocaust survivor Mireille K. was stabbed and burned in the heart of Paris”, French-Jewish politician Meyer Habib said on Sunday.

“While France is still traumatized by the terrorist attack in Trebes, we are discovering today the shocking murder of Mireille K., an 85-year-old Holocaust survivor who was stabbed and burned to death at her home in Paris’ 11th District.”,Habib  Said.

On Friday, 25-year-old Radouane Lakdim ,  a Moroccan-born French national, went on a shooting spree in Trebes,   hijacking a car ,shooting  two people inside and killing one,  then killing three more in a supermarket after taking hostages, including a  French police Lt, who tried to negotiate with Lakdim. Investigators found notes in Ladkim’s home which refer to IS, a legal source said, including a hand-written letter in which he claimed allegiance to the jihadist group, BBC reported.

“ I spoke at length this evening with David K., one of the sons of Mireille of blessed memory, to express my condolences and support during these difficult moments. I will meet him tonight or tomorrow,” Habib continued.

“Unfortunately, the number of victims rises but it seems that the story repeats itself: Like Sarah Halimi of blessed memory (who was murdered by her Muslim neighbor who threw her out of her window), Mireille also knew the suspect – who is currently under arrest – her 35-year-old Muslim neighbor whom she had known since he was a child.”

“Like Sarah Halimi, in this case as well, the French authorities are very careful about linking the murder to an anti-Semitic motive. The family has no doubt about the anti-Semitic background of the incident,” added Habib.

“For Sarah, it took almost 10 months for the legal authorities to recognize the obvious reality. What about Mireille? The investigation has begun, but I am afraid that after Sarah, Mireille also fell victim to the hatred of Jews which is increasingly seen in the suburbs, against the backdrop of Islamic radicalization, hatred of Israel but also hatred of France.”

“Like the murder of Sarah Halimi, in this case, as well, I intend to fight along with other Jewish organizations for the sake of justice and truth,” concluded Habib.

There has been a wave of anti-Semitism and terrorism in France in recent months.

The scrawling of swastikas and arson of  2 Kosher butcher shops  in Creteil, the slashing of a young girl’s face in Sarcelles, an anonymous letter and threats against the synagogue in Saint-Maur   are just a few recent Anti-Semitic incidents

France has suffered a series of major Islamist attacks over the past three years, including the massacre at the satirical newspaper Charlie Hebdo, the November 2015 attacks that killed 130 in Paris, and the 2016 Bastille Day truck attack in Nice. The most recent assault came in October when a Tunisian man stabbed to death two women at Marseille’s railway station, Times of Israel reported.