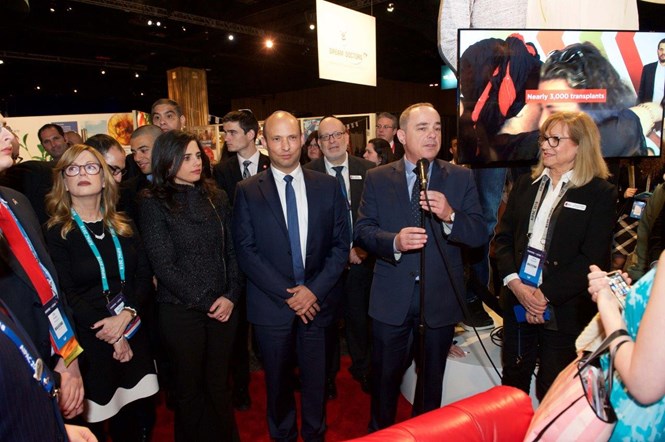 Israeli Non-Profit Featured for Building and Maintaining the World’s Largest Jewish Bone Marrow Registry; and For Their Work Saving Lives Around the World

Ezer Mizion, Israel’s largest non-profit organization providing health support services in Israel and The Jewish Bone Marrow Registry around the world, was prominently featured by The American Israel Public Affairs Committee (AIPAC) at its recently held policy conference in Washington for its growing efforts and contributions in Israel, the United States and around the world with a special emphasis on its global bone marrow registry. At this year’s conference, Ezer Mizion unveiled its new #SharedLife campaign through which the organization plans to raise awareness of its bone marrow initiative.

Established in 1979, Ezer Mizion began as a non-profit in Israel. It was founded by Chananya Chollak who was inspired from his experience with local medical care units and hospitals following his father-in-law’s sudden illness. In addition to his family’s experience, Mr. Chollak took notice of the toll that illnesses were having both emotionally and financially on other Jewish families and it was that empathy upon which the foundation of Ezer Mizion was built. Today, the organization reaches more than 670,000 individuals from Israel and around the world.

In 1998, Dr. Bracha and Moti Zisser founded the Ezer Mizion’s Bone Marrow Registry. What originally began as a registry in Israel has today expanded to be the largest Jewish Bone Marrow Registry around the world. It has 885,264 registrants (including 470,038 IDF recruits), has successfully matched nearly 12,000 patients, and has facilitated nearly 3,000 transplants.

A key differentiator for Ezer Mizion is its exclusive partnership with the Israel Defense Forces (IDF). The partnership was initiated and facilitated by Motti and Dr. Bracha Zisser. The agreement was signed in 2005. The IDF obtains swab samples from incoming soldiers for the Ezer Mizion Bone Marrow Registry. Statistics show that bone marrow donations from younger individuals (beginning at age 18) have a higher rate of success for the matched recipients. The partnership with IDF grants Ezer Mizion access to a sampling pool which includes young candidates from various ethnic backgrounds. Each recruitment cycle allows the organization to receive a fresh, diverse set of new registrants.

With the launch of the #SharedLife campaign, Ezer Mizion plans to educate the public about the importance of bone marrow registration and the advancements in the process including how a simple cheek swab is all it takes to join the registry.

“We are truly honored to be invited as a featured guest at this year’s AIPAC Annual Policy Conference,” said Dr. Bracha Zisser, Director of the Bone Marrow Registry at Ezer Mizion. “It is an inspiring experience to be surrounded by so many like-minded individuals and groups coming together in support of the State-of-Israel and the Jewish people. Our goal as an organization is to relieve pain, save lives, and utilize this opportunity to raise awareness of the Bone Marrow Registry.”

To learn more about Ezer Mizion, to donate, or to register as a donor, please visit: www.SharedLife.EzerMizion.org.

Established in 1979 by Mr. Chananya Chollak, Ezer Mizion is one of the largest non-profit organizations in Israel providing medical and social support services. The organization provides a diverse range of services to positively impact the lives of the sick, disabled, elderly, and underprivileged. The organization benefits more than 670,000 people annually, has more than 25,000 volunteers to support its initiatives, and an annual budget of $100 million. One of the organization’s major initiatives, which was launched in 1998, is Bone Marrow Donor Registry. To date, this registry includes 885,264 active registrants, more than half of which are IDF recruits. Since its inception, nearly 12,000 positive matches have been established and nearly 3,000 transplants facilitated. To learn more about the organization, to donate, or to register as a donor, please visit: www.EzerMizion.org.