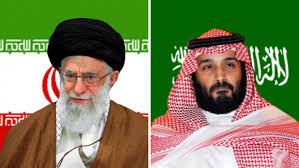 Saudi Arabia’s powerful Crown Prince has compared the Supreme leader of  Iran  to Adolf Hitler, during a recorded interview for 60 Minutes.

“He wants to create his own project in the Middle East very much like Hitler, who wanted to expand at the time. Many countries around the world and in Europe did not realize how dangerous Hitler was until what happened, happened. I don’t want to see the same events happening in the Middle East” bin Salman said during the interview referring to Ayatollah Ali Khamenei.

Saudi officials, comparably to President Trump, Israeli officials, and many GOP leaders, agree that the Obama deal with Iran does not limit Iran’s nuclear capacity but merely delays Iran’s quest for nuclear weapons, while ignoring Iran’s other activities, such as supporting Shia militias.

Bin Salman is scheduled to meet with President Trump soon and during his trip to the White House, he plans to persuade Americans to invest in his reform plans, which aim to diversify the Saudi economy away from oil, increase the kingdom’s military self-sufficiency and raise its citizens’ quality of life, Times of Israel reported.

He also plans on meeting with business, entertainment and technology leaders in a number of US cities.

Bin Salman who has forged a close friendship with President Donald Trump’s Jewish son-in-law, Jared Kushner, is on the same page with Israeli Prime Minister Benjamin Netanyahu when it comes to the topic of Iranian expansionist policies.

“Saudi Arabia does not want to acquire any nuclear bomb, but without a doubt, if Iran developed a nuclear bomb, we will follow suit as soon as possible,” Mohammed bin Salman said in an interview with the CBS newsmagazine “60 Minutes” which recently aired.

The Crown Prince also played down Iran’s power, saying its army was not well ranked in the Muslim world and that Saudi Arabia had a larger economy. “Iran is far from being equal to Saudi Arabia”, he said during the interview.

Saudi Arabia, a Sunni monarchy and has been at odds with Iran and has accused them of funding militias to undermine Arab states, while Shia Iran accuses Saudi Arabia of backing Sunni extremist groups.  This conflict puts them at opposite sides across the world in various conflicts, including the ones in Yemen, Syria and Iraq, as The Irish Times explained.

The Saudi-based Muslim World League, a body once notable for its anti-Israel hostility, in January  condemned   Holocaust denial, Times Of Israel noted.

The powerful Crown Prince has been a positive force for change in Saudi Arabia and for the strengthening of the  nation’s allegiance with the US and Israel.