On Friday, March 9, ALEH (www.ALEH.org), Israel’s foremost network of care for children with severe complex disabilities, transformed the 8th annual Jerusalem Marathon into a celebration of disability inclusion and acceptance. With participants in every race, cheering sections on every sideline, and the largest group at the 500-meter ‘Community Track,’ including more than 50 “runners” with severe disabilities, ALEH was everywhere at once, spreading the message of inclusion and highlighting the importance of quality care for Israel’s disability community.

Boasting more than 100 runners of all ages, ‘ALEH Ascend,’ the organization’s inclusive running team, was a force to be reckoned with on the 5K, 10K, half marathon and marathon tracks. Team members included young men and women from the Tri-State area currently on gap year programs, officers from the Jerusalem Police Department, firefighters from the Jerusalem Fire Department, doctors and nurses from Hadassah Medical Center, and top lawyers from the firms of Goldfarb Seligman, Ephraim Abramson & Co., Herzog Fox & Neeman (HFN), and Meitar Liquornik Geva Leshem Tal (Meitar).

“I jumped at the chance to run for ALEH Ascend and immediately recruited six more runners from our firm to join me. Individuals with disabilities are an integral part of our society, and we must do whatever possible to make sure that they share in all of the same experiences that we enjoy,” said Rafi Shapira, a Partner at Ephraim Abramson & Co. “The race of life is different for everyone, but there are certain universal truths, and we can learn so much from the children of ALEH about determination, resilience and strength. I am thrilled to be sharing this experience with them, and I hope that it’s just the first of many.” 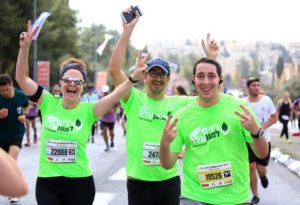 Eight-year-old Amichai Klein from Bet Shemesh, the youngest member of ALEH Ascend, echoed the sentiment, explaining that he chose to run his first-ever race with ALEH because the message of inclusion spoke to him. “People shouldn’t be judged by their disabilities or skin color or anything else that they can’t control. They should be appreciated for what they can do and given a chance to participate always,” said the young running enthusiast, who convinced his 11-year-old brother, Netanel, to run the 5K with him. The dynamic duo, whose parents immigrated to Israel from New York, raised $1,000 from family and friends in Israel and the U.S. to support ALEH.

Seven years ago, Adina Falk of East Brunswick, NJ, decided to mark her Bat Mitzvah by developing a unique project with ALEH. Inspired by her uncle Josh Falk of Pittsburgh, PA, who has severe complex disabilities, Adina set out to write a song about accepting individuals with disabilities. She recorded the song and sold it on iTunes, Amazon, and Reverb for $0.99, and all proceeds went to ALEH. Adina is now spending her gap year in Israel and was thrilled be able to support her favorite cause once again.

“For me, running with ALEH Ascend in the Jerusalem Marathon is like living out a dream. I have been connected with ALEH for so long, and it is so exciting to finally be able to hit the streets and spread the message of inclusion in such a concrete and public way,” said Falk. “It’s better than I ever imagined. This is a proud moment.”

While ALEH Ascend made its mark at the competitive races, a group of officers from the Jerusalem Police Department and their ALEH running partners won the day on the ‘Community Track’ for the fifth straight year. After months of training, the officers used specialized walkers and words of encouragement to lead the ALEH residents down the 500-meter stretch as hundreds of ALEH supporters cheered them on. In some cases, the police officers actually wore residents who could not use walkers in special walking harnesses, giving children who have never even moved their own legs the ability to “run” in the marathon. 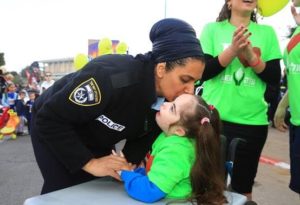 “Over the last seven years, I have worked with ALEH on various community events, and I am now participating in the Jerusalem Marathon project for my third year. I visit ALEH’s Jerusalem facility once a week to train with my partner, and I am always excited to see him. He’s like my little brother,” explained Tal Rubin, the Jerusalem Police Department’s Community Policing Supervisor. “The amazing atmosphere on race day is just a small part of this project. I love the whole training process and get so much out of spending time with my partner. Any ALEH volunteer will tell you that it’s not clear who gets more out of this mentoring opportunity, the volunteers or the residents. But it is clear to me that opportunities like this are why I became a police officer in the first place. This is how I can make a lasting impact on Israeli society.”

Shlomit Grayevsky, Director of ALEH Jerusalem, expressed tremendous gratitude to the Jerusalem Police Department and all of the volunteers who made ALEH’s participation in the Jerusalem Marathon such a stunning success, for the organization and the disability inclusion movement in Israel.

“ALEH’s goal has always been to provide every individual with complex disabilities in Israel the opportunity to reach their fullest potentials. We work hard to change the way people view those with disabilities, so that they are embraced and included, instead of shunned or forgotten,” said Grayevsky. “The way that our amazing children push their limits at the Jerusalem Marathon sends a strong message: that anyone can achieve anything and conquer any obstacle. It’s all about willpower, determination and a great support system. Year after year, the marathon provides our ALEH residents with an opportunity to transcend their disabilities and feel just like everyone else.”

All told, more than 500 ALEH supporters attended the Jerusalem Marathon to support the organization’s vital work and promote disability inclusion in Israel, including ALEH residents and their extended families, ALEH’s professional staff and National Service volunteers, international volunteers from North America and many countries across Europe, mentors from the Jerusalem Police Department, and the multi-generational athletes of ALEH Ascend.

After more than three decades of successful growth and exciting advancements, ALEH has become Israel’s foremost network of care for children with severe complex disabilities, providing over 750 children with high-level medical and rehabilitative care in four residential facilities across the country. Thanks to ALEH’s continuum of loving care from infancy and childhood through adulthood, residents advance well beyond their initial prognoses and live happy, dignified, and meaningful lives.

To learn more about ALEH, arrange a site visit in Israel, or donate, please visit www.ALEH.org.