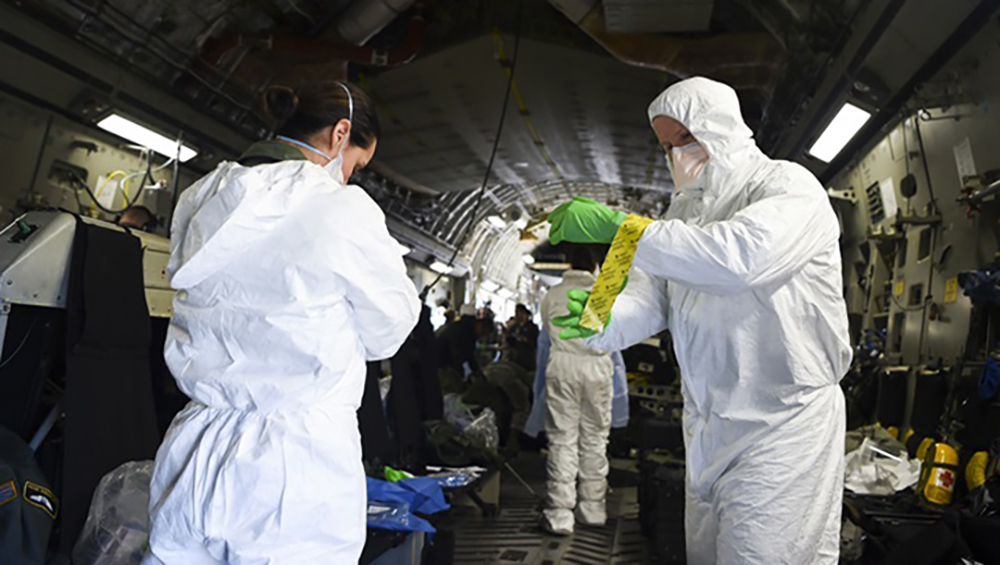 Airmen assist one another in donning their personal protective equipment, while on-board an Air Force C-17 Globemaster III during transportation isolation system training at Joint Base Charleston, South Carolina. Engineered and implemented after the Ebola virus outbreak in 2014, the TIS is an enclosure the Department of Defense can use to safely transport patients with diseases like novel coronavirus. (U.S. Air Force photo by Senior Airman Cody R. Miller)

Communist regime engaged in a massive cover-up — exposing the world to global pandemic and economic meltdown.

Despite criticism from elements within the elitist establishment media and some radical progressives, President Donald Trump was correct to refer to the COVID-19 virus as a “foreign virus” or “Chinese virus.” Leading the charge of the president’s critics was none other than CNN’s Jim Acosta, who stated that reference to the virus as “foreign” may strike people as “xenophobic.”

In response, Fox’s Tucker Carlson accurately referred to Acosta as a “poisonous moron.” In fact, Carlson was being kind to Acosta, who works for an organization that has long abandoned actual journalism in favor of propaganda.

The Coronavirus, which has thus far killed at least 9,386 and infected 229,960 others, emerged from the city of Wuhan, which is the capital of Hubei province in the People’s Republic of China. Chinese authorities were well aware that they had a pandemic on their hands way back in December but maliciously suppressed information about it. Significantly, The Times of UK, citing a respected and independent Chinese publication, reports that in December Chinese labs identified the pathogen that caused viral pneumonia in patients infected with the coronavirus disease and described the pathogen as highly infectious. A regional health official in Wuhan ordered the compiled samples and related research destroyed. Chinese authorities belatedly acknowledged the highly infectious nature of the disease in late January.

When news of the Wuhan virus began to surface through desperate and often disquieting social media posts, the communist regime of the People’s Republic did what it does best and silenced those responsible for the posts by making them disappear. Needless to say, the regime deactivated their social media accounts as well.

China’s leader Xi Jinping does not handle criticism well. The latest victim of China’s crackdown on information is Ren Zhiqiang, outspoken property tycoon and government critic. After publishing an essay critical of the government’s handling of the outbreak, Ren Zhiqiang disappeared and has not been heard or seen since.

Trump’s national security advisor, Robert O’Brien noted that the calculated Chinese cover-up cost the world two months. Early intervention by virology experts of the CDC could have thwarted an outbreak, or at least minimized it. Affected nations could have stopped flights to and from China earlier, limiting exposure.

In addition to lives lost and disrupted, the Chinese virus has already taken an incalculable toll on the world’s economies. The Stock Market is down by 25 percent. Retirees have watched helplessly as their retirement portfolios dwindle. The unemployment rate in the United States is expected to rise to 6 percent by mid-2021, up from its current 3.5 percent. Businesses are shuttering and bustling metropolitan cities like New York look like ghost towns. It’s almost apocalyptic in scope and scale.

All of this could have been avoided had China been more forthcoming about its Wuhan flu. But there’s more to this story than a mere Chinese cover-up.

There are two theories as to the origin of the Wuhan flu. The first, is that it originated at a Chinese wet market, where live animals like dogs, cats, snakes and Kuala bears are slaughtered in the most filthy and unsanitary conditions. These wet markets are breeding grounds for animal to human virus transmission, and Chinese authorities were well aware of the risks associated with such wet markets.

The second theory is that the virus emerged from a hazardous level 4 bio-weapons facility in Wuhan, located adjacent to the wet market. The virus managed to migrate from the lab, perhaps from an infected bat, to the wet market.

Chinese wet markets are controversial not only because animals in such markets are badly mistreated, but also because they represent a known biohazard to humans. The deadly H7N9 strain, which surfaced in 2013, was believed to have come from one of these Chinese wet markets. The Chinese SARS virus, which surfaced in 2002 also originated from one of these markets.

Yet despite the known hazards posed by these wet markets, Chinese authorities did little, if anything, to shut them down. The Chinese government did eventually shut down the Wuhan wet market but others throughout China, and parts of Asia still operate without regulation or safeguards.

Instead of accepting blame for unleashing hell on the world, the regime has opted to change the narrative, insinuating that the United States was responsible. On March 12, Chinese Foreign Ministry spokesman Zhao Lijian wrote on twitter, “When did patient zero begin in US? How many people are infected? What are the names of the hospitals? It might be US army [sic] who brought the epidemic to Wuhan. Be transparent! Make public your data! US owe [sic] us an explanation!” In this regard, the communist government of China is no different that the mullahs of the Islamic Republic, who blamed the coronavirus on America, the Zionists and the Jews.

A government-run Chinese paper also advocated that China halt export of needed medicines to the U.S. to combat COVID-19 in the hope of plunging the U.S. into “the mighty sea of coronavirus.”. Over the years, pharmaceutical companies have opted to have their drugs manufactured in China because it’s cheaper. China now maintains a dominant position in the global supply chain for pharmaceuticals.

The West must make China pay dearly for its maleficence. As of December 2019, U.S. debt to China was $1.07 trillion. We can begin the process of just retribution and compensation there. We also have the option of imposing tariffs on China and earmark funds collected from those special tariffs to a selected account aimed at assisting those adversely affected by the Chinese coronavirus. Lastly, the United States must come to the realization that manufacturing jobs must be brought back to America’s shores and America must be restored to the manufacturing giant it once was.

For far too long, Democrats and even some Republicans took a soft approach on China, disregarding its abysmal human rights record, its theft of trade secrets and intellectual property, its unrestricted hacking activities, its illegal encroachment on the South and East China Seas and its attempts to undermine its democratic neighbors like Taiwan. Former Democratic candidate for president, Mike Bloomberg, even went so far as to deny that China was ruled by dictatorship. But the Wuhan virus has brought clarity to China’s malign activities. This is one thing that all Americans, Democrats and Republicans, should agree upon without equivocation.