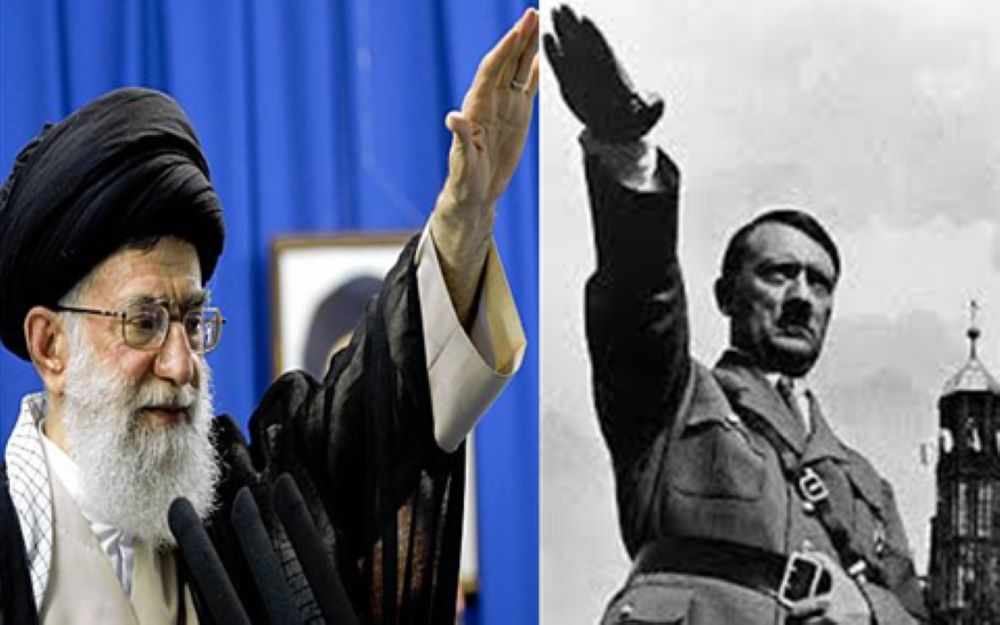 The author writes: “Yes, I hate the extremist Muslims because they are the new Nazis. They murder Muslims, Christians, Jews, and people of all different backgrounds and faiths. Today is Purim, a time in which we remember how Haman wanted to murder all Jews. The Hitlers and Hamans are alive and well today and continue resounding their pledge to annihilate Jews in both Israel and throughout the Diaspora.”

My motto is never again, never forget, and never forgive. While some have criticized me for never forgiving the Nazis for what they did to my family, it is precisely this hatred that makes me the fighting Rabbi I am. I refuse to forgive. This is what motivates me to speak out against injustice wherever it may be found.

Yes, I hate the extremist Muslims because they are the new Nazis. They murder Muslims, Christians, Jews, and people of all different backgrounds and faiths. Today is Purim, a time in which we remember how Haman wanted to murder all Jews. The Hitlers and Hamans are alive and well today and continue resounding their pledge to annihilate Jews in both Israel and throughout the Diaspora.

As the Mishnah teaches us:

In order to forgive another human being, that person must first ask for forgiveness, but “turn the other cheek” is not innate to Judaic principle. In Judaism repentance ( Shuvah) is a process of introspection and authentic remorse, which must be manifest and demonstrated through actual deeds — by a recognizable transformation. In other words, true Shuvah means, given the same set of circumstances, one will not return to the evil actions and deeds that prompted the initial behavior. By doing so, we can move closer to G-d, and He is forgiving, as is conveyed in the following Talmudic Tractate, Yoma, 85b:

A king had a son who had gone astray from him on a journey of hundred days. His friends said to him, ‘Return to your father.’ He said, ‘I cannot.’ Then his father sent a message to him, saying, ‘Return as far as you can, and I will come the rest of the way to you.’ In a similar way, G d says, ‘Return to me and I will return to you.’”

The above Tractate imparts a significant lesson about the individual’s responsibility to build a personal relationship with G-d, which is through demonstrable remorse and action — through a conscious return to the laws and the path He provides in the Torah.

Yet, there are some things beyond us to personally forgive. Thus, Rabbi or not, it is not my personal obligation or place to forgive the atrocities that the Nazis committed when they wiped out most of my family or for me to judge and decide their sense of remorse and whether or not the deeds of another reflect a genuine transformation. That is between them and G-d alone.

Nevertheless, on this day of Purim, the Commandment “Zachor Et Amalek, “Remember Amalek” ( Devarim 25:17-19; Sanhedrin 20b), resounds, reminding us not to forget the harsh lessons we learned from the Amalekite, the descendants of Esau, when in the desert from Egypt and when Saul took pity on Agag, the Amalekite king, sparing his life but disobeying G-d’s Command to destroy every last one, and, analogously, the incarnation of evil. The Lubavitcher Rebbe expands on this concept in “ The Everlasting Battle: Parshas Zachor“:

The war with Amalek was not a one-time affair, to be forgotten as soon as it was over. The Jewish people are commanded by G d to always remember Amalek’s evil actions, and to destroy his memory utterly. Torah is most explicit:

‘Remember what Amalek did to you on the way as you came out of Egypt; how he met you on the way, and cut down all the weak who struggled behind you, when you were weary and exhausted; and he did not fear G d. Therefore, when the L rd your G d will relieve you of all your enemies around you, in the land which the L rd your G d gives you as a hereditary portion, you shall blot out the memory of Amalek from under heaven. Do not forget!’”

In essence, to forgive is also to forget, and, once again, we are reminded by G-d’s Command never to do so. Imbued in Torah are the instructions for leading an ethical life, and G-d provides us with the blueprints to do so through His laws and also with the Free Will to choose whether or not to follow the path He has set. Suffice it to say, if we are to choose to live by His laws, tolerance and forgiveness are not to apply to the incarnation of evil. Otherwise, we make no distinctions between good and evil or right from wrong, and there is nothing to set us apart, as the following passage clearly denotes:

Iranian leadership in responding to criticisms of its program to acquire nuclear weapons, sounded much like Hitler when they proclaimed, “Israel must be wiped off the map!” and that the Holocaust is a “myth!” What’s most amazing to me is that this war with Amalek continues—that the world is still so concerned with the fate of Israel and the small number of Jews in the world who do not even amount to a percentage of error when calculating the world’s population. The rhetoric is apocalyptic, even Biblical. Why care about Israel and the Jews? It must be a spiritual struggle of the generations. The Torah then has been proven to be incredibly wise in warning us never to forget or worse, to underestimate Amalek the anti-Semite—no matter how he may appear.

There was a love fest between Hitler and Reza Pahlavi, the Shah of Persia, from the moment Hitler came to power in 1933. The shah was enamored with the concept of the Aryan master race—especially because Nazi racial theorists referred to Aryan origins in the Proto-Indo-European lineage of Persia. So intense was the shah’s identification with the Third Reich that in 1935 he—can you believe this—renamed his ancient country “Iran,” which in Farsi means “Aryan!” From that point on, Iranians were constantly reminded that their country was bonded with Nazi Germany for all time.

During the war years, Iran became a haven and headquarters for Gestapo agents and German operatives. In Tehran’s marketplace, it was common to see placards that declared, “In heaven, Allah is your master. On Earth, it is Adolf Hitler!” (Edwin Black, 12/19/05, JTA) And so how could the president of Iran now deny that the Holocaust ever happened when his nation is named for Hitler’s master race?

Let there be no mistake, the ultimate agenda of Iran and Hamas—like that of Hitler’s Germany—is not simply the destruction of Israel, but of the Jewish people.

The Torah is clear, Amalek and Haman and all of Jewish history teach us that we must take our enemies for their word. They mean what they say and they say what they mean.