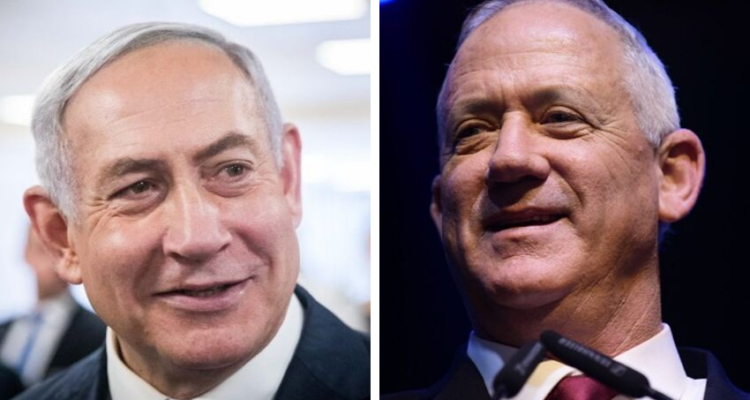 In an event that few would have foreseen, Blue and White appears to have disintegrated as its leader Benny Gantz led his faction into a unity government with Prime Minister Benjamin Netanyahu on Thursday.

Details are still emerging but reports say that Gantz will lead the 15 members of his Israel Resilience party into the government. Israel Resilience is one of the parties that makes up Blue and White, a coalition of parties brought together to better compete against Netanyahu’s Likud.

It’s not yet known what position Gantz will fill in the year-and-a-half before he is expected to take on the prime minister’s role. The positions of speaker of the Knesset and foreign minister have been broached.

Gabi Ashkanazi, who like Gantz is a former IDF chief of staff, will take the position of defense minister, replacing Naftali Bennett of the Yemina party.

Both Chili Tropper and Avi Nissenkorn have been named as the future justice minister, with most reports saying the former.

The two other parties that make up Blue and White – Yesh Atid, led by Yair Lapid, and Telem, headed by Moshe Ya’alon – will remain outside the government.

Lapid also stated that despite the cornavirus being one of the most serious issues in the history of Israel,  he said that the crisis is not a reason “to abandon our values. We promised not to sit under a Prime Minister with three criminal indictments. We promised not to sit in a coalition of extremists and extortionists. We said we wouldn’t allow anyone to undermine Israel’s democracy.”

The Guardian noted: Tamar Zandberg, a member of the leftwing Meretz party allied with Blue and White, accused Gantz of abandoning millions of voters who sought an alternative to Netanyahu.

“You’ll end up a rug under the feet of an alleged crook, an inciter and racist,” she said in a speech to the session. “We are overwhelmed by the depth of the deceit and disgrace that has plagued today.”

In a signal indicative of the digital age, Lapid and his members quit Blue and White’s Whatsapp messenger group one-by-one .

Labor party MK Merav Michaeli sharply attacked Gantz for joining with Netanyahu, who faces indictment in three corruption cases. However, it’s not clear if Labor leader Amir Peretz and the other Labor MK, Itzik Shmuli ,will join the government or the opposition.

Gantz promised repeatedly during the campaign that he would never join in a government led by Netanyahu because of the indictments the latter faces.

Gantz had also promised never to join with the Arab Joint List, breaking that promise immediately after the elections to accept them into a potential government.

Although it’s a technicality, Gantz will now need to return the mandate he was given to try and form a government to President Reuven Rivlin, who will then hand it to Netanyahu.

Blue and White was founded Feb. 21, 2019 and lasted for three election cycles. It was an alliance of Gantz’s new Israel Resilience Party, the centrist Yesh Atid Party headed by Yair Lapid, and the center-right Telem Party led by former Defense Minister Moshe Ya’alon.

The merger came ahead of the April 2019 national elections with the hope of defeating Netanyahu. Netanyahu’s Likud and Gantz’s Blue and White both won 35 seats, but neither could find enough coalition partners for a 61-seat majority in the 120-seat Knesset.

This story except where indicated was provided by World Israel News. Visit their site for up too date news from Israel at  www.worldisraelnews.com
By: WIN Staff and TJV News