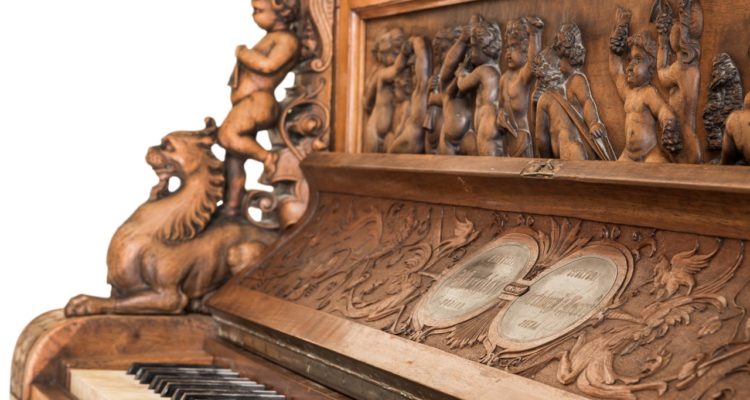 The 220-year-old Siena Piano, now in Israel after many wanderings, is expected to sell for over $1 million.

A piano said to have been built from wood originally brought to Italy from King Solomon’s Temple is expected to sell for over $1 million when it goes on auction next week in Israel.

According to Winner’s Auction House, which will be overseeing its sale, the Siena Piano is legendary in the musical world. Italian harpsichord maker Sebastiano Marchisio began building it in 1799, but it was only completed by his son and grandsons in the mid-1800s.

In its description of Lot 136, the auction house wrote that the instrument’s sound was unique, “delicate” like a harpsichord but more powerful, like a piano. But its special sound only complemented the singularity of the material it was allegedly made from.

According to World Piano News, it was built of Lebanese cedarwood scavenged from a ruined church, and locals in Turin claimed that the wood came from Solomon’s Temple, which Roman general Titus had pillaged and destroyed in 70 BCE.

The Bible records that Solomon asked King Hiram of Tyre (Lebanon) for such wood to be used to build the Temple 400 years earlier.

The piano was given to Marchisio’s granddaughter, but was used so often for public performances that the marquis of Siena decided to enrich its appearance. He commissioned Marchisio’s descendants for the job and they added engravings and carvings to the instrument.

Cherubs, lions, gryphons, masks, and dragon heads cover its sides and front, as well as portraits of composers Handel and Mozart, among others.

The city of Siena bought the piano in 1868 and gifted it to the future king of Italy, Umberto I. The king described the piano to a Jewish concert pianist he heard play in Jerusalem years later, and invited him to play on it, but he never did.

The instrument then disappeared from the palace during World War II.

Strangely, it was found following the battle of El Alamein in North Africa among crates of Nazi loot buried in the sand.

Covered in plaster, it was unrecognizable, but Avner Carmi, a piano maker from Tel Aviv who was serving in the British army and was the grandson of that very pianist, rescued it to be used to entertain the troops.

It then disappeared again, but astonishingly, Carmi found it, still covered in plaster, at a Tel Aviv dealer after the war.

When he took off the plaster, he was amazed to recognize the unique features his grandfather had described to him when talking of his meeting the king. He refurbished the ancient piano and then took it with him to the United States in 1953, and concert pianists once again began playing on it, including the world-famous Arthur Rubenstein.

According to news report, Carmi brought it back to Israel in 1970, and it was sold by his daughter in 1996 after her parents died to a private Israeli collector for $1 million.

The report, written in January, said that the piano had been put on eBay with a price of $2 million. Seemingly, no buyer was interested at the time. The opening bid at the auction house is $10, but the official estimate is that the piano will fetch between $1.5-2 million.(World Israel News)