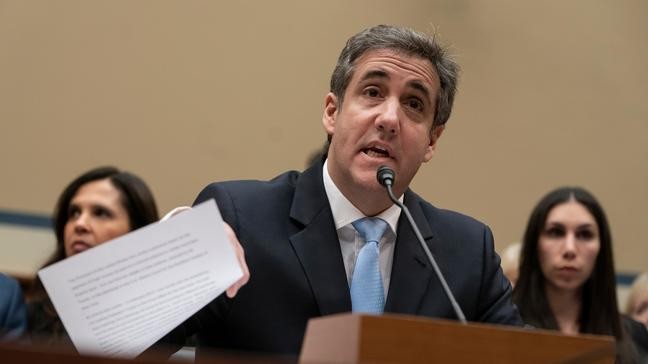 n this Feb. 27, 2019, file photo, Michael Cohen, President Donald Trump's former personal lawyer, reads an opening statement as he testifies before the House Oversight and Reform Committee on Capitol Hill in Washington. Search warrants unsealed Thursday, Jul 18, 2019, shed new light on the president's role as his campaign scrambled to respond to media inquiries about hush money paid to two women who said they had affairs with him. (AP Photo/J. Scott Applewhite, File)

A former personal lawyer for President Donald Trump was denied early release from a three-year prison sentence Tuesday after he pleaded guilty to numerous charges, including campaign finance fraud and lying to Congress.

U.S. District Judge William H. Pauley III said it seemed Michael Cohen’s request for release to home confinement after serving 10 months in prison “appears to be just another effort to inject himself into the news cycle.”

The judge noted that Cohen raised the danger of getting the coronavirus in prison as the latest reason why he believed he was entitled to a reduced sentence.

He also rejected the request on other grounds, including that the defense lawyers were making a request that only prosecutors were entitled to make.

Pauley noted that Cohen attempted to cooperate with prosecutors after his December 2018 sentencing in Manhattan federal court in the hopes that he could earn a reduced sentence.

But he said prosecutors believe he made false statements about facts in his sessions with prosecutors.

he judge said it was not for him to second-guess the prosecutors’ decision that Cohen’s false statements and efforts to minimize his crimes justified a decision not to recommend a reduced sentence for Cohen.

In asking for early release, Cohen’s lawyers said their client was the victim of a continuing campaign of “character assassination” by prosecutors.

They claimed the U.S. attorney’s office in Manhattan “stubbornly refuses” to acknowledge the breadth, scope and relevance of over 170 hours of testimony he gave to nine government agencies.

Cohen, 53, is housed at a federal prison in Otisville, New York, after pleading guilty in 2018 to campaign finance violations and lying to Congress, among other charges. He began serving his sentence last May.

Cohen maintains he deserves early release for telling investigators about the president’s misdeeds.

In court papers, prosecutors say Cohen has offered no evidence that he provided them with substantial assistance of the kind that warrants a significant reduction in sentence. And they say Congressional testimony does not earn a reduction either.

Cohen pleaded guilty in 2018, abandoning his longtime position of loyalty to Trump. He later met with federal and state prosecutors in New York and with the office of special counsel Robert Mueller, telling them he had lied to Congress to protect Trump.

Prior to Cohen’s sentence, Mueller’s team of investigators described his help to their probe, but prosecutors in Manhattan made it clear that Cohen wanted to help them only on his terms, unwilling to submit to the demands that he reveal all of his crimes and cooperate fully and honestly.