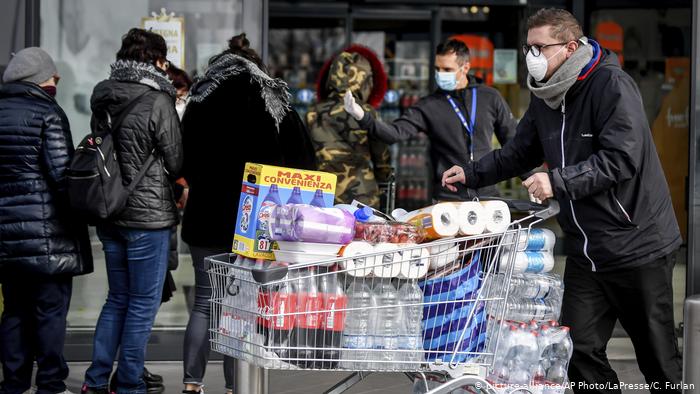 AP image
Last night my attempts to do some late night stress-free grocery shopping at Fairway were stymied when an unpleasant gentleman proceeded to throw his groceries on top of mine.  I have recently concluded that there is no such thing as supermarket etiquette even during this crisis: as I witnessed a man smell the open bread with his nostrils touching the tips of the baguette; saw a woman sneeze on the produce; and watched a supermarket conveyor belt be hogged by my unapologetic neighbor.  “Three to six feet apart,” I replied, “those are the rules, aside from the fact that it is my turn not yours.”  This got a huge guffaw as he called me every name in the book and mockingly advised I call the police.  I thought about it but decided the cops had more pressing matters to deal with than a rude supermarket customer who had invaded my space, and besides I left my phone at home-the chances someone would lend me theirs during this stressful time were zero.  So I walked home fuming at the abuse I had received while trying to adhere to the government’s guidelines and concluded that perhaps I could make “lemonade out of lemons” by researching the actual levels of contamination in unknown areas.
Believe it or not I was correct in my disapprobation, as grocery conveyor belts are an absolute breeding ground for bacteria.  Shoppers place billions of products on these contaminated areas exposing their families to harmful bacteria.  These belts have a lifespan of 30-plus years since they are constructed from PVC-a petroleum based material that is a magnet for bacteria.  The International Association of Food Protection found that yeast, mold, staph and coliforms were hanging out on this belt.  A study by Michigan State University found these belts were 100% contaminated which was later confirmed by microbiologist Connie Morbach who said she had found “organisms typically associated with open wounds, and infections” on the belt.  Moreover, the belt’s porous nature ensures that even if scrubbed for 24 hours it will never be fully clean.  One solution would be for supermarkets to install antimicrobial covers-but it is doubtful they will do so since this will slow down business.  Unfortunately we are left to grapple with another potential source of Covid-19 as germ paranoia accelerates.
What about shoes are they as toxic as we are now hearing?  There is evidence that the soles of shoes carry more bacteria and fungi than the uppers.  Bacteria found on footwear include E. coli, as well as the bacteria causing pneumonia and respiratory infections.  In fact, a recent study showed shoes average 421,000 units of bacteria, much of which consist of fecal material.   96% of shoes were found to contain fecal bacteria and were transferred to tile at a rate of 90-99%.  Experts are recommending sanitizing shoes with Lysol, vinegar, or mixes of bleach and water, while machine washing others-but frankly who wants to be touching these germs.  The best we can do is leave our shoes at the front door and hope for the best.
There is an undoubtable fear of germs on airplane food trays and bathrooms with flight attendants reporting numerous mother’s changing baby diapers on the tray table. However, there are lesser known areas of contamination such as the open seat pocket that holds in-flight instructions and germs that can last more than four days on the porous material.  A “Today” investigation found the presence of E. Coli, Klebsiella and Acinetobacter-otherwise known as fecal bacteria- on the plastic bins at the security line.  Moreover, the New York Times reported in September 2018 that these trays carried more cold germs than that on a toilet. Washing hands, social distancing and trying not to touch one’s face or mouth during an excursion are all useful tips-however, a certain number of germs are inevitably transferred.
The last bastion of solace, my cell phone, which has gotten me through this pandemic, might be the most toxic of all.  Time magazine reported that people check their phones an average of 47 times a day allowing microorganisms to quickly move to your fingers.  A recent study found more than 17,000 bacterial gene copies on a phone; while University of Arizona scientists said phones had 10 times more bacteria than most toilet seats.  Viruses can spread easily by coughing on a phone and then discreetly handing it to a friend.  Thankfully, there are some methods to reduce exposure including not leaving it near a toilet when it flushes or even bringing it into a germ-laden bathroom.  Moreover, wiping phones just a few times a month using a cloth  with 60% water and 40% rubbing alcohol is sufficient-especially if you are a frequent hand-washer.  As the virus hopefully recedes, a new category of fears should be added to the psychiatric journals called “germophobia” with the definition being anyone who was alive during the first months of 2020.
By: Lieba Nesis