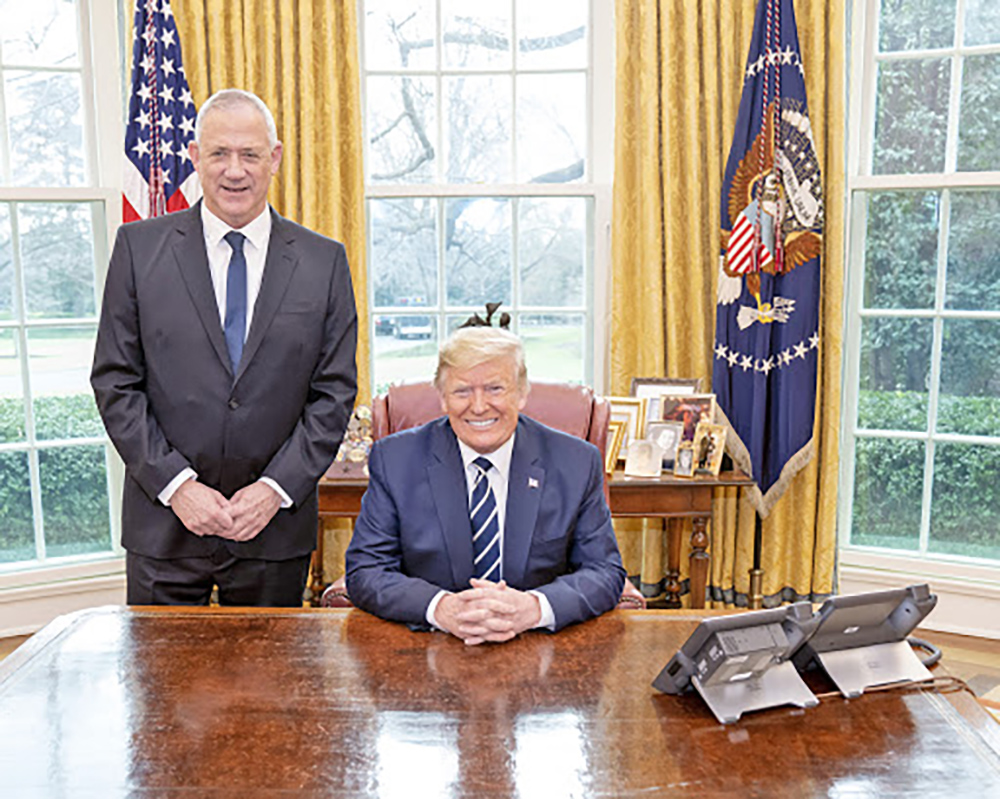 Caroline Glick writes: “How can Trump or his administration trust a man who flat out lied to the President in the Oval Office? What can explain Gantz’s irresponsible behavior? Did he lie to Trump – and the Israeli public – because he and his colleagues are secretly radical leftists who seek power to undermine everything Israel stands for? They wouldn’t be the first leftist politicians to do so.” Photo Credit: 5tjt.com

If Blue and White Party leader MK Benny Gantz forms a minority government with Avigdor Liberman’s Israel Beitenu Party and the Labor-Meretz party, based on the outside support of the Joint Arab List, Gantz’s success will torpedo Israel’s relations with the United States. 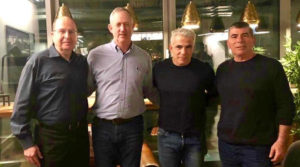 Gantz, Lapid, Yaalon and Ashkenazy are not ideologues – unless detesting Netanyahu with the single-minded venom of a rabid dog is an ideology. (Courtesy of the Blue & White Party)

This week, a senior official who was present during Gantz’s meeting with U.S. President Donald Trump in late January revealed: “Gantz committed in the Oval Office that, if he became prime minister, he would form a government of people that would support the president’s peace deal.”

The only way for Gantz to keep the promise he made to Trump is to join a coalition government led by Netanyahu with Likud and its right-religious coalition partners. And that is an option that Gantz and his partners in the Blue and White “cockpit” – fellow former IDF chiefs of General Staff Moshe Yaalon and Gadi Ashkenazy and former media star Yair Lapid – will not support.

They are working feverishly to cobble together a radical government with the post-Zionists in Labor-Meretz and the anti-Zionists in the Joint Arab List. All of which will be hard-pressed to work with the Trump administration.

How can Trump or his administration trust a man who flat out lied to the President in the Oval Office?

What can explain Gantz’s irresponsible behavior?

Did he lie to Trump – and the Israeli public – because he and his colleagues are secretly radical leftists who seek power to undermine everything Israel stands for? They wouldn’t be the first leftist politicians to do so.

In 1999, their commander, former IDF chief of General Staff Ehud Barak ran against Netanyahu by presenting himself as ideologically indistinguishable from him. Barak insisted that he would implement Netanyahu’s center-right policies, but that he would do so with the support of the media and the leftist elite.

Gantz’s willingness to effectively surrender Israel’s rights in Judea and Samaria to win the parliamentary support of politicians that seek Israel’s destruction as a Jewish state – shared by his partners in the Blue and White leadership – seems to indicate that they are rabid post-Zionists. But a brief consideration of their other positions and actions suggests that something else is motivating them.

Gantz and his colleagues present themselves as champions of the rule of law and democracy, which they insist, Netanyahu is destroying. 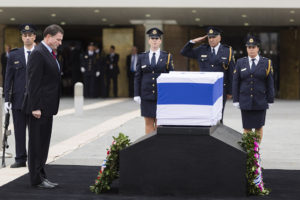 Blue and White is viciously attacking Knesset Speaker Yuli Edelstein for refusing to convene the Knesset’s Arrangements Committee, which is responsible for convening the rest of the Knesset committees. They insist that in acting as he is, Edelstein is colluding with Netanyahu to destroy Israeli democracy. But as Simcha Rothman, from the Movement for Governability and Democracy, explained in Israel Hayom Thursday, it is Blue and White that is blocking the Arrangements Committee from convening. (Photo by David Vaaknin/Getty Images)

But consider their actions: Presently, Blue and White is viciously attacking Knesset Speaker Yuli Edelstein for refusing to convene the Knesset’s Arrangements Committee, which is responsible for convening the rest of the Knesset committees. They insist that in acting as he is, Edelstein is colluding with Netanyahu to destroy Israeli democracy. But as Simcha Rothman, from the Movement for Governability and Democracy, explained in Israel Hayom Thursday, it is Blue and White that is blocking the Arrangements Committee from convening.

The Knesset rules provide that membership in the committee is determined by the size of each party. The parties in the Knesset receive one member in the committee for every four members in their Knesset faction. Under the prevailing rules, the blocs working with Netanyahu and Gantz would have equal representation in the committee.

Blue and White wants to break the rules in order to receive a majority of Arrangement Committee members. Edelstein insists on following the rules.

Why are Gantz and his colleagues fighting so hard to break the rules? Because they need a majority on the committee in order to have the procedural power to pass laws that will undermine Israeli democracy and the rule of law.

Blue and White and Israel Beitenu have submitted bills explicitly directed towards achieving one goal: Preventing Netanyahu – and only Netanyahu – from forming a government. These bills, if passed, would overturn Israel’s rule of law twice.

First, they are personal legislation – directed at Netanyahu alone. Personal laws are a concept antithetical to the rule of law and liberty. They open the door for full-scale repression and authoritarianism.

Second, if they succeed in passing their anti-Bibi laws, they will retroactively nullify the votes of 2.5 million Israelis who voted for parties that want Netanyahu to remain in office.

Blue and White wages its war against parliamentary rules to pass vindictive, anti-democratic laws at a time where Israel is facing the gravest health and economic crisis it has ever confronted.

The Wuhan coronavirus epidemic presents Israel with a choice between terrible and terrifying options.

Tuesday, Netanyahu announced that in a bid to lower the infection rate, Israelis should stay home and only go out to buy food and medicine and other critical activities. Schools are closed. Most government offices are closed. Businesses are closed. The only people still working are the ones who can work from home. 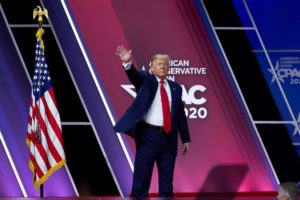 Netanyahu and his colleagues in the government enacted this policy with the understanding that, if forced to treat thousands of coronavirus patients at once, the health system will collapse. Everything must be done to slow the infection rate.

But the quarantine strategy holds its own terrible risks. Israel can handle an economic shutdown for a few weeks. If the current situation goes on for months, the economy will collapse and bring the health system with it. Hundreds of thousands of Israelis are being laid off. They will not be paying taxes. Without taxes, the government will be unable to maintain the health system or any other system for that matter.

What can be done? It appears that the only way to suspend the quarantine and so salvage the economy is by conducting universal coronavirus testing. Only universal testing can limit the quarantine to people who need to be isolated and enable the restoration of economic activity.

How quickly can Israel achieve the capacity to undertake such a program? What would it involve?

What other options are available?

Netanyahu, his ministers, the Health and Treasury Ministry officials and the National Security Council members have been working around the clock to try to come up with solutions.

Where are Gantz and his partners – Lapid, Yaalon and Ashkenazy – in their brandishing “cockpit” on these issues?

Blue and White has offered no recommendations for fighting the epidemic. Although Tuesday night, Gantz was nice enough to retweet Netanyahu’s warning to the public to stay home. His partners Yaalon and Lapid were not so disposed.

Instead, the two would-be national leaders belittled the threat – each in his own way – and insinuated that Netanyahu is colluding with the Coronavirus to destroy Israeli democracy.

Yaalon tweeted that Netanyahu is using the Coronavirus to avoid his criminal trial and destroy the Knesset. He later threatened Likud parliamentarians with legal probes for supporting Netanyahu’s efforts.

In a Facebook chat, Lapid insinuated that Netanyahu’s move to quarantine the public was unlawful and self-serving. In short, that Netanyahu isn’t interested in protecting the public from mass death. All he cares about is staying in power.

Blue and White has offered no solution on how to save the economy from collapse. But they can be counted on to blame Netanyahu for the high unemployment rates and negative economic growth if Israel finds itself in a fourth election.

Yaalon, who seeks to serve as Education Minister, has offered no suggestions for how to educate the 1.3 million schoolchildren who are at home with parents trying to keep up with their own work while homeschooling their children.

Then there is Iran. As the coronavirus rages through Iran, experts warn that the risk of an Iranian strike against Israel rises with the death toll. The theology of Iran’s ruling clerics holds that the Shite messiah, the Mahdi, is supposed to return at the end of days. To hasten his arrival, Iran’s ayatollahs believe that they need to start Armageddon.

Do the three former IDF chiefs at the helm of Blue and White have any concern over this? Do they have any suggestions for how to handle the threat as Iranians dig more and more mass graves for coronavirus victims?

Which brings us back to Washington: Three weeks ago, I traveled to Washington to speak on a panel at the Conservative Political Action Conference (CPAC) – the largest conservative gathering in America. Most of the discussions were related to U.S. domestic issues. But Israel is so important to conservatives that organizers chose to hold a panel devoted to Israeli sovereignty in Judea and Samaria.

There were no calls for the partition of Jerusalem and the expulsion of Jews from Judea and Samaria either on the panel or from the audience. On the contrary, the sentiment shared by the audience and the panelists alike was that Israel should assert its sovereign rights in Judea and Samaria wherever it deems necessary.

This salutary state of affairs will be turned on its head if the Democrats win the presidency in November. In that event, Israel will find itself under assault from a hostile president who heads a party hostile to Israel. How would a Blue and White government handle such a challenge? Dependent on the Joint Arab List – which openly seeks Israel’s destruction as a Jewish state – for its survival, there can be little doubt that Blue and White would surrender to even the slightest pressure emanating from Washington.

Gantz, Lapid, Yaalon and Ashkenazy are not ideologues – unless detesting Netanyahu with the single-minded venom of a rabid dog is an ideology. They accuse Netanyahu of caring only for himself and pledge to put the country first. But we see that, as Netanyahu labors to save the country from medical and economic collapse, all they can think about is destroying him. Even at the expense of torching Israel’s relations with the U.S., endangering the lives and financial stability of its citizens, and disregarding strategic threats and opportunities. They accuse Netanyahu of destroying democracy as they contemptuously ignore Knesset rules in order to pass laws that would nullify both the rule of law and the votes of 2.5 million citizens.

So no, Gantz and his colleagues aren’t ideologues.