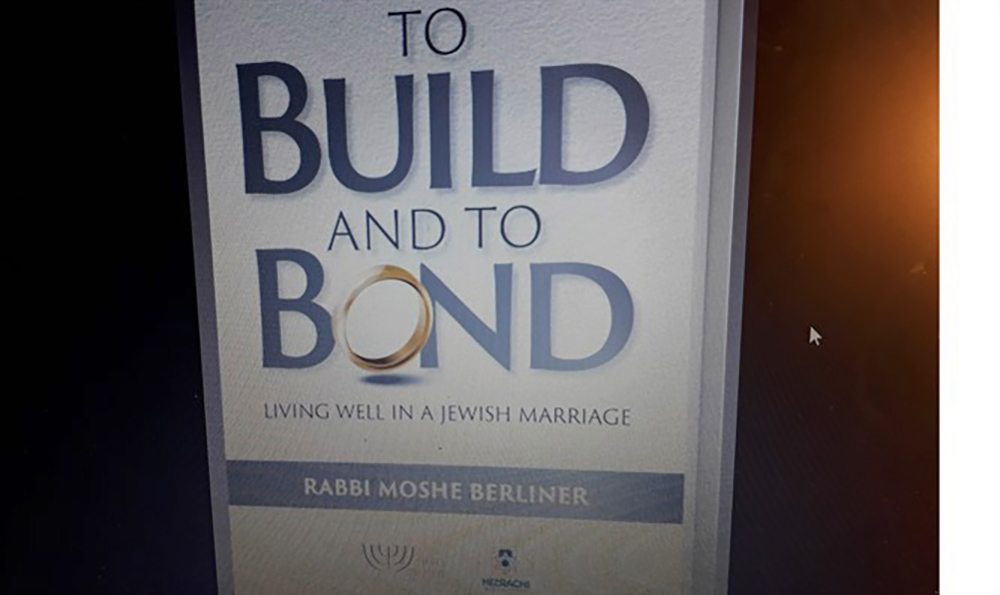 “To Build and to Bond, Living Well in a Jewish Marriage,” by experienced counselor Rabbi Moshe Berliner, is a must read for young couples as well as older marrieds, whose marriages will benefit from its uniquely pragmatic approach.

In Rabbi Dr. Norman Lamm’s classic booklet “A Hedge of Thorns” on the laws of ritual purity in the Jewish family, there is a beautiful sentence which I always thought represents an eternal truth. Rabbi Lamm expressed the idea that financial success and material goods were never the measure of a Jewish home, nor was the overt public expression of love between spouses (aptly paraphrased in Fiddler on the Roof’s famous “Do you love me” song). Instead, a true, deep, enduring love, harmony and mutual responsibility were the lasting riches of the Jewish home.

That sentence came to mind as I carefully read a most well-written, practical book with a positive, pragmatic approach for attaining a successful Jewish marriage today, “To Build and to Bond,” (publisher Mizrachi World Movement and Machon Netivot) by experienced finger-on-today’s-pulse counselor Rabbi Moshe Berliner, MSW, who makes his family’s h-ome in Har Nof, Jerusalem.

The book is sorely needed and well worth a read by young or prospective couples, as well as older ones whose marriages are beginning to go aground, all of whom may end up rereading it, or using it as a handbook, as their life unfolds and theory becomes reality, or if adjustments become hurdles.

The book is also sorely needed because it does not seem that the first part of the sentence by Rabbi Lamm is true anymore. The rise in standard of living and the emphasis on the good life of today’s young marrieds is often supported by Dad and Mom, whose credit cards keep the couple afloat on a high level for years or until the shock of real life sets in. Whereas going out to eat was once a carefully saved for treat, kosher restaurants are filled with young couples, dressed in the most au courant fashions, but who are not earning the money to pay the bills or even thinking about them. Those whose parents cannot afford that lifestyle for their offspring are, in contrast, eaten up with a feeling of missing out.

The lack of the need to achieve things on their own, to accept that life outside the cocoon in which they were raised is filled with challenges disguised as problems, and the resulting inability to try to solve them instead of giving up, may be part of the reason for the rise in marital problems, separation and divorce in the religious community.

And then there is the other side of the coin, the emphasis on the individual in a world where women are bombarded with messages about “realizing their potential” – outside the home – and demanding an end to often imagined or secular defined inequality–a world in which where many young husbands have not been adequately prepared for the shared interpersonal aspects of married life.

(We are, to be clear, talking about two decent young adults who find themselves sinking as a couple, and not the cases where devastating negative truths about prospective spouses were obscured by eager matchmakers.)

Help is clearly needed. Rabbi Berliner faces all this and more without indulging in criticism. He approaches the above issues and others pragmatically, and what is most impressive is that he does it in a positive way, not falling into moralizing about the situation I described above.

Rabbi Berliner’s most foundational statement is based on a wise pronouncement of our Jewish Sages, and he develops its ramifications as the basis for the entire book:

A married couple, taught Chazal, is not simply one man and one woman living together, but a totally new entity which Hashem left for mankind to create– analogous to a set in mathematics not being equal to its members–a creation which has its own existence, which must be tended, whose flourishing is the responsibility – yes, responsibility – of each spouse and of both of them together.

This is the creation that allows one’s life to reach its potential, as Rabbi J.B. Soloveitchik, quoted in the book, famously said: “It is not good to be a man if he is alone” – reinterpreting the verse in Genesis and referring to both men and women.

Rabbi Berliner makes it clear that this creation is worth investing time, effort and energy to maintain, teaching partners that the goal is “Shalom bayit” and not “Tzedek bayit” – the goal is a home imbued with peace, not one in which there is a court of justice in which one partner is found guilty and the other innocent.

He analyzes and explains a long list of issues causing controversy and expounds clearly on the methodology for dealing with them. Often, he says, in their imagined future home, a husband or wife is looking to correct the faults in his or her upbringing (and he comfortingly- for me at least- says that even the best parents miss out on something their child may unconsciously or consciously feel he is lacking), but that the other member of the couple is not necessarily attuned to that need. That is not what marriage is for, he says, although it can be a byproduct as long as a couple sticks to the correct rules of operation.

First of all, what are we aiming for? Berliner lists and explains the seven elements of a good marriage, diagrams the challenge of building a joint marriage contract. He then goes into clear behavioral details about how to achieve those goals: the kinds of criticism allowed and panned, the kinds of apologies that can work versus those that make things worse, the need for a shared vision (with wonderful Venn diagrams clearly illustrating separate and joint space) as well as individual aspirations, acceptance, conversation and communication, dealing with conflict and disagreements as well as partners and the entire marriage living up to each one’s expectations. Putting all this down on paper is a crucial aid to every couple, enabling them to see the entire picture of what marriage should be, to think of the marriage more than themselves.

A key idea in the book is developing a sense of responsibility, not judging reality versus expectations. Work on your creation, on your marriage, Rabbi Berliner says. You have learned about midot (behavioral values) all your life. It is your responsibility to use those midot to be a good spouse – don’t think about your partner’s responsibility to do that, don’t make marriage into a self-defeating contest about control, about who is right, who is better, who has to give in or change, but concentrate on the part you must play in lovingly and maturely building this home.

I don’t want to give away details beyond the chapter headings in this book, because it has to be read in order to serve as a guide. I will, however, bring a story to be found on page 253, which, to me, says it all about being ready for the help the book provides.

“A Hassidic Rebbe, speaking of a man’s distance from Hashem, noted that there are two distinct kinds of distance between people, both of which generate identical feelings of loneliness and despair. There are times, he said, when a person is in fact far from his loved one. He calls out and there is no reply. However, the Rebbe explains, there is another situation that generates the same feelings. One turns first to one side and then to the other, and seeing no one nearby, feels bereft and abandoned. But in reality, he is standing back to back with his loved one. If only he turned around, he would find that she is near to him. His feelings of distance and abandonment are real though they were always close to one another.”

In reading and applying the wisdom and direction in this book, a husband and wife are told how they can learn to turn their relationship around by turning to one another, by discovering that their partner is much closer than they thought. “The message is very near you, in your mouth and in your heart, so that you may follow it (Deuteronomy 30), ” says Moshe about the Torah way of life. A successful marriage is part of that way of life. Directions to follow are waiting for you in this book.