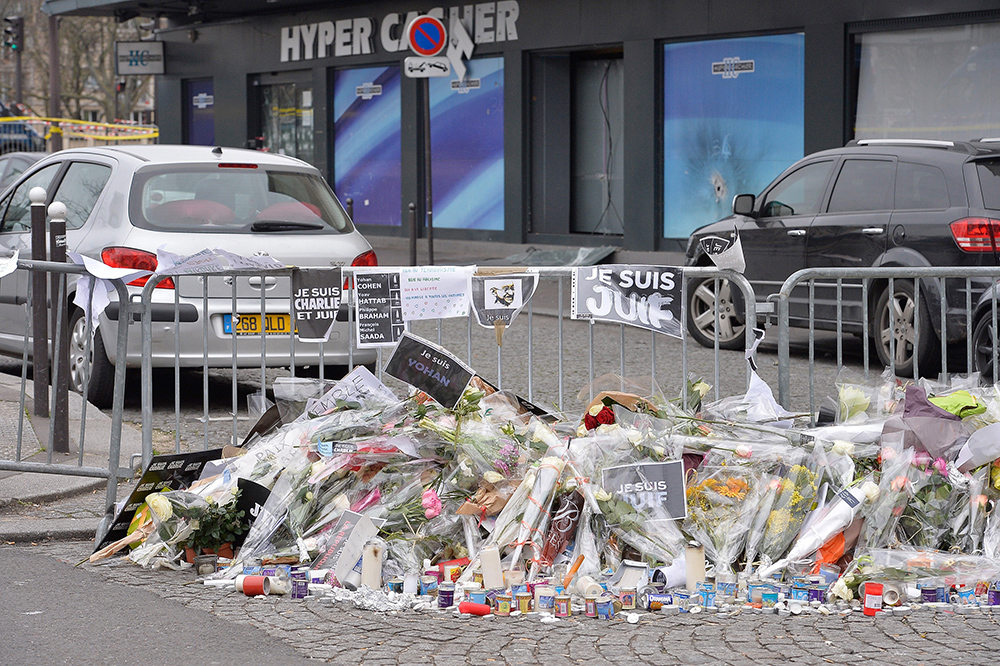 A general view outside the Jewish supermarket Hyper Cacher as Benjamin Netanyahu, Prime Minister of Israel, pays his respect to the victims following the anti-Semitic terrorist attacks on January 12, 2015 in Paris, France. The terrorist atrocities started with the attack on the French satirical magazine Charlie Hebdo, killing 12, and ended with sieges at a printing company in Dammartin en Goele and a Kosher supermarket in Paris with four hostages and three suspects being killed. A fourth suspect, Hayat Boumeddiene, 26, escaped. (Photo by Aurelien Meunier/Getty Images)

In the angrily worded press release, the cosmetics billionaire and longtime Republican donor said that both he and the World Jewish Congress have “unequivocally distanced” themselves from the “unauthorized release of an unpublished two-year report conducted by former New York Police Department Commissioner Raymond Kelly, which, among its conclusions, allegedly cites France as the most dangerous place to be a Jew in Europe. The purported findings were published on Monday by the New York Post.”

“Neither the World Jewish Congress nor I, personally, approved the public release of the recent report on antisemitism in Europe conducted by former NYPD Commissioner Raymond Kelly, which I commissioned, but have not yet reviewed. The findings of this report, which I cannot in any way confirm, were prepared on a strictly confidential basis, to be shared first and foremost with our affiliated communities. The report was intended for internal purposes only, so as to grant the leadership of our communities full discretion in how and whether to proceed with its conclusions,” said WJC President Lauder. 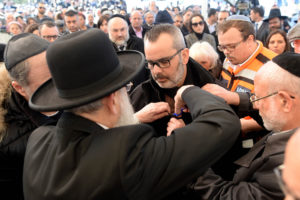 In this handout provided by the Israeli Government Press Office (GPO), a man tears his garments as a sign of respect for the deceased during the funeral ceremony of the four Jewish victims of the Kosher supermarket terror attack in Paris, on January 13, 2015, in Jerusalem, Israel. Thousands of people attended the ceremony of the four men who died during a terrorist attack on the Hypercacher kosher supermarket in Paris, which was held in Jerusalem. (Photo by Kobi Gideon/GPO via Getty Images)

“At a time of unquestionably rising antisemitism, we must be extremely vigilant and cautious in both our proactive and reactive strategies, looking at all of the facts on the ground and their full implications. The irresponsible release of such information inevitably foments anxiety and fear among Jews. It is extremely disappointing, and moreover, disconcerting, that this report has been released without my authorization,” Lauder said. “The World Jewish Congress is committed to working on behalf of, and in full coordination with, each of our more than 100 affiliated Jewish communities across the globe. Our primary interest is their best interest, and we will not allow this process to be exploited further.”

On November 26, 2019, the Jerusalem Post reported that both Lauder and Kelly were seen together on the red carpet at the 47th Annual International Emmy Awards Gala presented by the International Academy of Television Arts & Sciences in New York. In addition to holding the office of president of the World Jewish Congress since 2007, Mr. Lauder also served in the Pentagon and as US Ambassador to Austria under the Reagan administration in the 1980s.

Clearly, Lauder’s relationship with former NYPD Commissioner Ray Kelly was forged a number of years ago.

According to a press release that appeared on the Lauder web site known as JCS International, Lauder was presented with a Lifetime Achievement Award in April of 2018 at the Plaza Hotel in New York on the occasion of a gala benefit for the Federal Enforcement Homeland Security Foundation.

At the gala, Kelly praised Lauder, saying he has “a profound commitment to public service.” Kelly added: “Ronald has dedicated his life to helping other people and he’s never wavered in his staunch support for law enforcement.”

“Even as we face challenges and threats like never before,” Ambassador Lauder said addressing federal agents past and present, and their families, “America is with you. Our nation is in your debt,” said Lauder, “and we will not take you for granted.”

The subject of the report that Lauder had commissioned Kelly to do was presented to the public on Monday in the form of an opinion piece written by Judith Miller that appeared in the New York Post. Miller is a contributing editor of City Journal.

According to Miller’s piece, Kelly’s report was two years in the making and concluded that “the threat to the 450,000 Jews in France, the world’s third-largest community (after Israel and the United States), is the most “acute.” Attacks and threats against French Jews surged 74 percent from 2017 to 2018, and preliminary data for the first half of 2019 indicate “further intensification,” with another 75 percent increase last year.”

Miller writes that Kelly and two fellow investigators, David Cohen and Mitchell D. Silber, both former senior NYPD counterterrorism officials, blame the French government for failing to respond to the almost-constant violence against and harassment of French Jews. 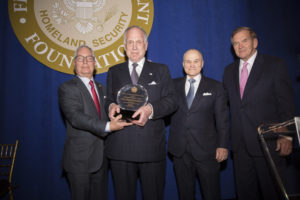 It should also be noted that on February 3rd, Silber began his tenure as executive director of the Community Security Initiative, a new position created as part of UJA-Federation of New York and the Jewish Community Relations Council of New York’s $4 million plan to help secure Jewish institutions in the New York region. The move was done in partnership with the Paul E. Singer Foundation, Carolyn and Marc Rowan, and several foundations, according to UJA in a statement announcing the move.

According to Miller’s piece, Kelly’s report was two years in the making and concluded that “the threat to the 450,000 Jews in France, the world’s third-largest community (after Israel and the United States), is the most “acute.” Attacks and threats against French Jews surged 74 percent from 2017 to 2018, and preliminary data for the first half of 2019 indicate “further intensification,” with another 75 percent increase last year.”

Miller also writes that “500 attacks and anti-Semitic acts per year are “notoriously underreported,” according to the study, which contends that “no responsible individuals or even government representatives place much credence in these numbers.”

Prominent French Jews complained to the report team that Kelly had put together, according to Miler’s piece, saying that requests for additional government funding to address security shortfalls would likely be rejected, since the French establishment interprets the country’s “secularism ideology” to mean that the state “cannot give ‘special’ attention to one ethnic or religious group over another, even in the face of disparate threat or dangers.”

Kelly and his research team wrote that French Jewry is left without much confidence that they “will be protected on a sustained basis from the verbal and physical harassment and/or violence facing them.” 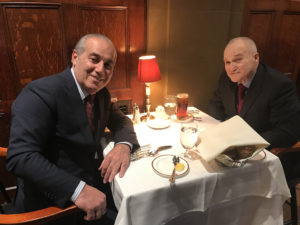 The report attributes French anti-Semitism to history, a sluggish economy and demography, according to Miller’s piece in the NY Post. She writes of the dire situation in France: “Jews now face hate from three main sources. First, the old “strain” from the far right. The second threat comes from the left — the “intellectual/university class, [which] directs its anti-Israeli and pro-Palestinian views at French Jews via protests and social ostracism of even professional Jews.”

And now, for what it’s worth, the Jewish Voice editorial staff asks that you kindly indulge us as we take a few moments for a bit of opining and conjecture about this crucial matter.

It appears that word of the significant ripple effects that this article caused got back to Ambassador Lauder and the WJC rather quickly from France. While rife with speculation, it appears that the French government was beyond livid to learn that such deleterious information about the future of Jewish life in France had been made public. In his press statement, Amb Lauder said: “The irresponsible release of such information inevitably foments anxiety and fear among Jews. It is extremely disappointing, and moreover, disconcerting, that this report has been released without my authorization.”

The last thing that the French government needs right now is for more Jews to abandon their homeland for Israel or other places on this planet that feel more secure than France. France wants to hold on to their Jews for dear life because with a bustling Jewish presence in the Le Marais quarter of Paris as well as in Strasbourg and other cities and towns this translates into great prosperity for the French economy. If the Jews should leave, so will their money, creativity and influence. France wouldn’t want that scenario to be played out.

Also, it is noteworthy to mention that France has consistently attempted to embody the notion that somehow they are an enlightened and forward thinking democracy and the iconic phrase “liberte, egalite and fraternite” actually applies to them, so how would it look for the world to see a frenzied exodus of Jews from France.

In a November 20, 2019 article by Yardena Schwartz in National Geographic magazine, she writes of the grave situation that French Jews face on a daily basis.

“France is home to Europe’s largest Jewish population, the third largest in the world after Israel and the United States. Yet this historic community—dating back to the Roman conquest of Jerusalem and expulsion of the Jewish population 2,000 years ago—is in the midst of an existential crisis.

France’s interior minister has warned that anti-Jewish sentiment is “spreading like poison.” President Emmanuel Macron declared that anti-Semitism was at its highest levels since World War II. Amidst a string of attacks, Prime Minister Edouard Philippe admitted that anti-Semitism is “deeply rooted in French society.”

She adds that: “Facing record levels of anti-Semitism, many French Jews are joining an exodus to Israel. A third of all the French Jews who’ve emigrated to Israel since its establishment in 1948 have done so in the last 10 years, according to data from the Jewish Agency, which facilitates Jewish immigration to Israel.” 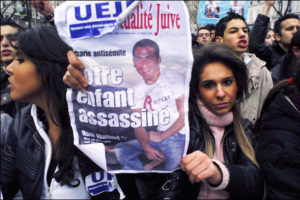 Jonathan Greenblatt, the CEO and national director of the Anti-Defamation League writes: “Fourteen long years have passed since the murder of Ilan Halimi, the young French cell phone salesman who was kidnapped and held for ransom in a basement in a Paris suburb where he was starved, tortured and beaten for 24 days before his captors gave up their depraved plan to cash in on a young Jewish life.” Photo Credit: Getty Images

Reminding us of contemporary anti-Semitism in Paris most recently, was Jonathan Greenblatt, the CEO and National Director of the Anti-Defamation League. In a powerful article that he penned for the Aish.com website on a new book that has been released on the barbaric torture/murder of French Jew Ilan Halimi, (of blessed memory), by Halimi’s mother Ruth, Greenblatt writes:

“Fourteen long years have passed since the murder of Ilan Halimi, the young French cell phone salesman who was kidnapped and held for ransom in a basement in a Paris suburb where he was starved, tortured and beaten for 24 days before his captors gave up their depraved plan to cash in on a young Jewish life.

The memory of this horrific event – seared for a time on the consciousness of France – has been fading in the wake of the murders of 10 more French Jews in anti-Semitic attacks in the intervening years. But we cannot let the world forget the tale of Ilan Halimi, both for the warning it provides about the lethality of anti-Semitism, and for the message his torture and death sends about the twisted allure, power and endurance of anti-Semitic canards.

In Ilan’s case, his undoing wasn’t the beautiful woman who lured him into a deathtrap. It was a single stereotype: Jews are wealthy and horde their money. Ilan’s kidnappers, a self-proclaimed “Gang of Barbarians,” believed that Ilan’s family and the Jewish community would turn over these untold riches in exchange for their son.”

The report recommends more than a dozen steps that the government and French Jews could take to reduce the threat, according to Miller’s article. She concludes by saying: Overall, however, the report is pessimistic: “This more violence-prone anti-Semitism is certain to worsen.”