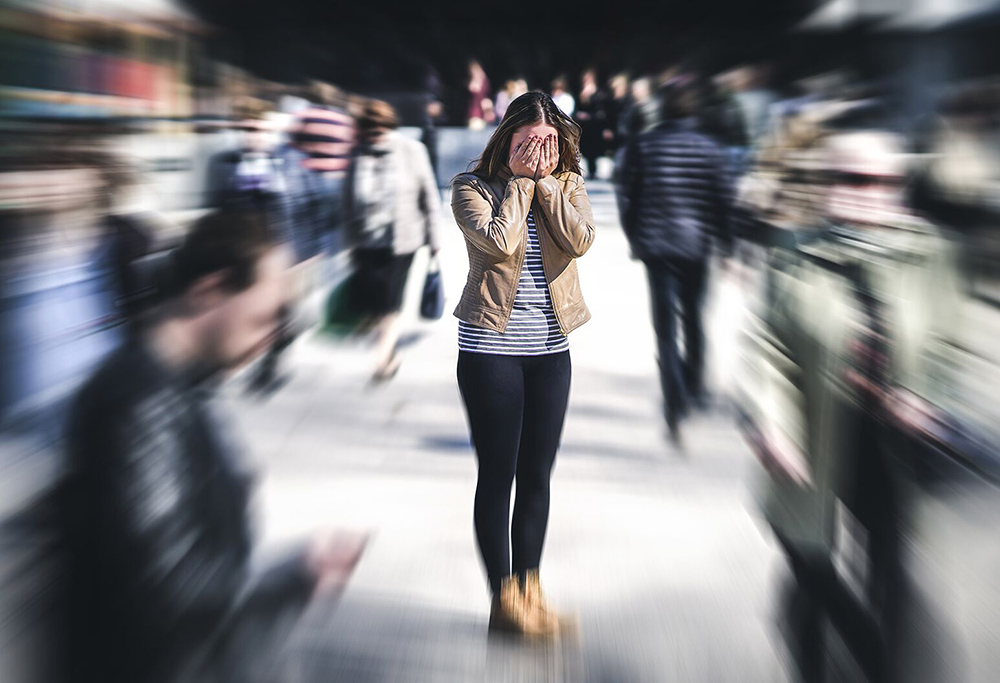 Whether you suffer from a fear of spiders, heights, or almost anything else, exposure therapy can help you to overcome it. Photo Credit: Getty Images

How facing your fears can make life more livable

By: Vanessa Caceres – for The Well by Northwell

You are standing at the top of your basement steps, frozen with fear. You need to do a load of laundry, but your body has stopped you dead in your tracks—an involuntary response to the threat you can sense lurking below. What you can’t see—but your mind is convinced exists—is the spider, with razor-sharp fangs and unsettling alien-like eyes, just waiting to pounce the moment you descend the stairs.

In reality, the tiny house spider in your basement is no real threat to anyone except the other insects in your home, but good luck convincing someone with severe arachnophobia of that.

Whether you suffer from a fear of spiders, heights, or almost anything else, exposure therapy can help you to overcome it. In this form of cognitive behavior therapy, trained therapists teach you to face your fear gradually. The ultimate goal is to get you past your phobia. While you may never have a pet tarantula, you can learn to coexist with the creepy crawlers in our world so it doesn’t stand in the way of living a full life.

Here’s what you need to know about this decades-old science-backed method:

You’ll walk before you run

Don’t worry that you’ll be forced to pet a dog or stand near the edge of a cliff on day one. “We put you in contact with the scary thing in a gradual way,” says Nicholas Forand, PhD, ABPP, and associate professor at the Donald and Barbara Zucker School of Medicine at Hofstra/Northwell. Often, people start by simply looking at pictures or videos of what they fear. “Then you move toward scarier things,” Forand says.

Usually toward the end of your sessions, you’ll have actual contact with the thing that scares you. One key difference: While in the real world your gut might urge you to run—during exposure therapy you’re coached to stay. “If you’re avoiding it or running away, you never get to learn if it’s really dangerous,” Forand says. Ideally, this gradual approach helps to change your perspective. The idea is that by confronting what frightens you, you’ll learn it’s not as scary as you think.

Patients are typically given “homework” to further their exposure between sessions. For example, someone with a fear of flying may watch videos of air travel or practice packing a bag as if they’re going to fly somewhere. They may actually go to the airport without boarding a flight. Someone with a fear of heights may be asked go to the second floor of the mall and lean over the balcony. Therapists and patients work together to personalize the treatment in a way that is effective for the person’s specific fear.

It’s just as effective as medications—sometimes even more

While it’s not 100% effective, exposure therapy for phobias has been shown to be successful 70% to 90% of the time for those who complete the treatment, says Forand.

Typically, this therapy runs 10 to 12 sessions, depending on the exact phobia and the severity of it. (In a small number of cases, people may require “booster” sessions for reoccurring phobias.)

Exposure therapy has also proven to be an effective treatment for conditions such as post-traumatic stress disorder, obsessive-compulsive disorder, social anxiety, and panic disorders. However, treatment plans for these patients will differ from those of

phobia sufferers. For these conditions, the success of exposure therapy is on par with taking antidepressant medications, which have been shown to be about 40% to 60% effective.

Sometimes therapists will use tools like virtual reality to get patients past their fears. This may happen when it’s not always possible to get real-world exposure to a specific thing that scares them—for example, if you have a phobia of seagulls but don’t live near a beach. Mitchell L. Schare, PhD, ABPP, professor and director of the Phobia and Trauma Clinic at Hofstra University, has even gone so far as to use a VR airport and airplane to help those with fears of flying.

Vivid guided imagery—which involves the use of words to evoke imaginary scenarios—is another tool that helps people kick their fears. In one instance, Schare led a patient through a detailed exercise that involved visualizing birds pecking away at someone walking through Central Park. This technique helped to show his patient that their fear was not reflective of reality. By the end of her treatment, Schare says, this woman was able to feed 40 to 50 seagulls at the beach without fear.

Is exposure therapy right for you?

Exposure therapy can make a difference for everyone from teens to adults who have lifelong fears. And while some people worry that this method will induce more anxiety, Forand says that’s not entirely true. “Anxiety and fear are normal emotions,” says Forand, adding that the fear that occurs during treatment happens in a supervised setting with the aim of helping the person overcome their phobia. Instead, by realizing that we don’t always have to run from our fears, we can learn to live with that discomfort.

That said, if you have heart, nervous system, or blood pressure problems, you should check with your doctor before starting exposure therapy.

Forand also recommends doing your research online in advance, as it can be difficult to find a licensed therapist who has been properly trained in and uses the technique. If you do find someone in your area, ask how frequently they use the technique with patients. Trust your gut feeling about the provider—it’s important to feel comfortable enough with a potential therapist to form a trusting relationship as you undergo exposure therapy.

“The idea that you should confront your fears is a powerful one,” says Forand. “By learning how to live with and overcome what you once feared, you come out feeling empowered.” And who knows? Maybe one day you’ll be able to confidently glide down those basement steps—because laundry is scary enough without worrying about spiders.

(Visit The Well at TheWell.Northwell.edu for more stories on how to take the best care of YOU.)

By: Vanessa Caceres – for The Well by Northwell