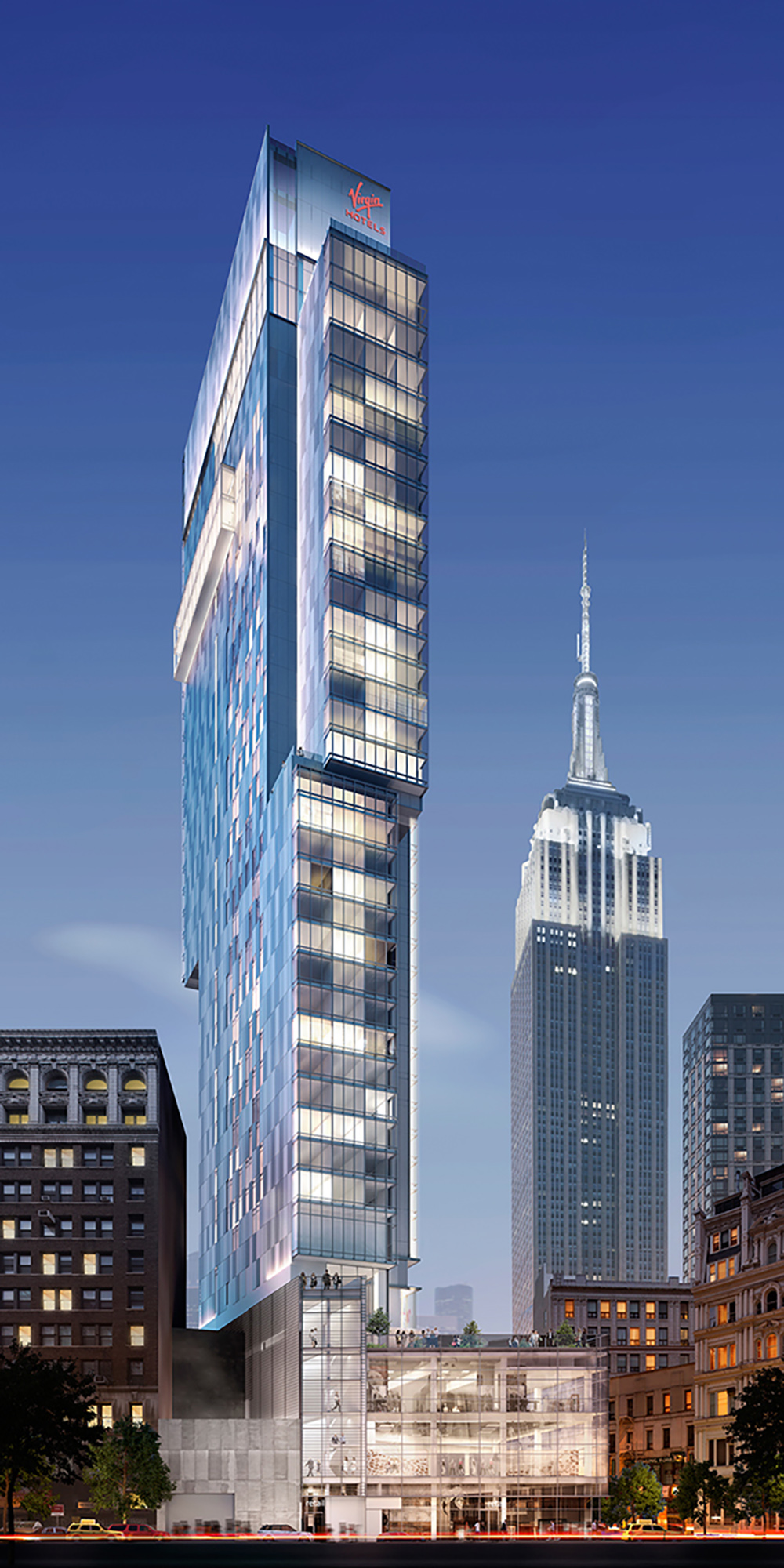 Two highly anticipated towers are topping off in Nomad. The Virgin Hotel at 1225 Broadway is close to completing its flashy glass curtain wall. Also, at the upcoming office building at 1245 Broadway construction has reached the top of the podium section.

As reported by NY Yimby, exterior construction on the 476-foot-tall-skyscraper has reached the final top floors. The tower, developed by Lam Group, will hold 465 hotel rooms and 90,000 square feet of retail within the podium. VOA Associates were tapped for the design of the tower, and Sir Richard Branson of Virgin Group will be spearheading the management of the 300,000-square-foot property. The 39-story building, situated between 29th and 30th Streets, is slated for completion in 2020. Most of the building is already clad in glass, only the crown, podium, and area behind the construction hoist remain.

The hotel’s base is a glossy 90,000-square-foot podium stocked with dining and drinking establishments, outdoor terraces, meeting rooms, lounges and a fitness center, an outdoor swimming pool and a lounge. The podium features an open, transparent style which will make it different from the surrounding buildings. Swingers, an upscale indoor miniature golf course, has already signed on to lease 22,000 square feet of retail space in the tower’s basement. This will be the London-based entertainment company’s first American location. The ‘Crazy Golf Club’ will serve cocktail and street food. “At long last, the city that never sleeps will get a beautiful and irresistible Virgin Hotel to play, eat, work, mingle, and yes, even to sleep,” said Sir Richard Branson.

Just a stone-toss away, construction has reached the top of the podium section at 1245 Broadway. The 23-story commercial office building will eventually top out at 318 feet tall. The new Nomad building is being co-developed by GDSNY and Sweden-based Klovern, and it is being designed by Skidmore Owings and Merrill. As per NY Yimby, a work force from StructureTech NY and Triton Construction is laboring to tie the steel rebar and to build the formwork for the reinforced concrete perimeter columns as well as the floor slabs. Once completed, the building will boast landscaped outdoor terraces, as well as a mix of exterior materials, and staggered set-backs, which will set it apart from its neighboring buildings.

The two developments join a score of other projects including new hotels, offices, stores, and residential skyscrapers revitalizing the NoMad neighborhood. Other recent projects including 1185 Broadway, Rose Hill, Madison House, 30 East 31st Street, and Bjarke Ingels Group‘s proposed office building to the east at 3 West 29th Street, soaring to new heights and changing the skyline to minimize the distinction even of the 39-story Virgin Hotel.