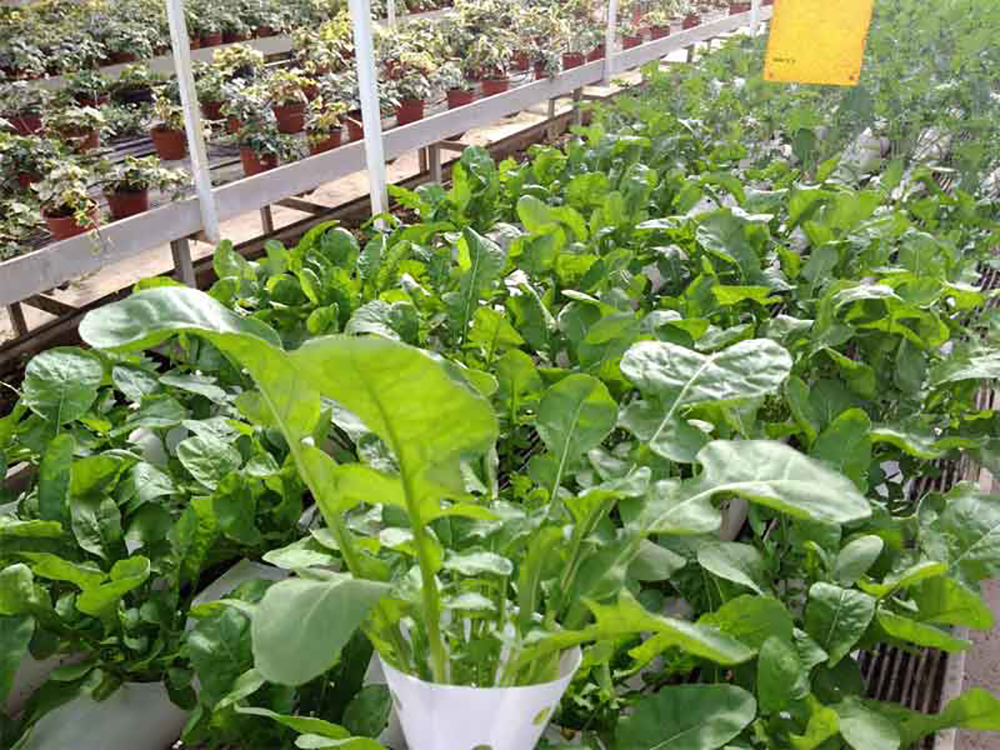 Tu BiShvat (the 15th of Shevat) is the Jewish New Year of the Trees. It’s the date used for calculating the beginning of the agricultural cycle, for the purpose of biblical tithes, and has become Israel’s own Green Day in modern times.

I see green shoots sprouting up, no, not a hint of an upturn in the global economy, but the growth of an environmentally safe, sustainable, organic, Shmittah-friendly hydroponic agricultural revolution is taking place in Israel.

Fed with a nutrient rich solution, hydroponic plants require less energy to break down food. This allows the plant to grow faster and to produce more foliage or fruit. A hydroponic plant has fewer problems with bug infestation, fungus and disease. Grown under the same conditions, a hydroponic plant can grow up to 30-50% faster than a soil plant.

Even with decelerating population growth, its estimated that by 2050, there will be about 9-10 billion people on planet Earth, an increase of as much as 25%. Experts estimate that global agricultural production will have to increase by about 60-70%, from the current levels, in order to feed everyone on the planet.

Commercial farming certainly has increased food production, but with it, comes harmful environmental consequences, and it uses disproportionate amounts of land and water. The use of earth’s natural resources is outpacing the planet’s ability to renew them.

More people in the world today, may have access to food that looks nice, and lasts longer than in the past, but many are unknowingly consuming chemical pesticides embedded within the plants’ cells. Toxic gasses and dust, produced in industrial farming facilities, pose significant health concerns to farm workers and the ecosystem. The research is clear, commercially produced food is less healthy and not sustainable long-term.

The goals, to reduce the use of chemical pesticides, save water, reduce food waste, produce more food locally, and raise awareness of healthier growing practices, demands involving more people in the process of food production and with higher levels of awareness.

We must transition to a more sustainable agriculture. We need an Israeli Green Revolution.

For Israel’s Green Day, I thought it would be nice to take a look at a few of Israel’s agricultural Green Tech revolutionaries, in recent years.

Started in 2009, LivinGreen was established to promote the field of Hydroponics and Aquaponics in Israel and globally. LivinGreen manufactures and markets all their own equipment. In 2015, they established the first commercial urban farm in Israel, on the roof of the Dizengoff shopping center in Tel Aviv.

The “Green in the City” project, started by the Dizengoff Center and LivinGreen, produces lettuce, basil, parsley, spinach, kale, bok choy and more. The fresh produce is then sold to restaurants, shops and private customers in the area. You can visit the farm, as part of an educational tour or course, and learn about urban agriculture, hydroponics and how to apply these growing methods at home.

Then there’s Flux, started in Israel 2014, (R & D is still in Israel), and now based in New York City. They developed what they call a GrowBot, called Eddy. Eddy, built with military-level sensors and image-processing technology, it employs artificial intelligence concepts from the Israeli army, in order to understand the needs of plants. Eddy sits in the growing reservoir, and users can stay updated on their crops’ progress via a mobile app. Data is uploaded to the cloud and the system chooses the correct protocol based on what you’re growing, the hydroponic system you’re using, and your location.

The system is both a diagnostic and an environment controller. When Eddy, floating in the water, senses that something needs adjusting, such as plant food, pH balance, lighting or water temperature, the grower receives a pop-up alert on his or her mobile phone or tablet.

Flux users are able to share ideas and photos with one another, if they choose to, but they’ll constantly be sharing sensor data passively, through the device. Most of the sharing happens automatically, like with Waze (a transportation app). Thus amassing data and creating community.

But by far the most ambitious and potentially revolutionary project isn’t commercial, but educational.

StartUpRoots, started by Robin Katz in 2014, is an Israeli NGO that runs hydroponic farming projects in Israeli schools, a Yeshiva, and a Jewish day school in America.

Their goal is to plant the seeds, of environmental awareness, sustainability, proper nutrition, the entrepreneurial spirit and financial independence, into Israeli youth. They have introduced curricula into schools that teach, a holistic approach to food production, health awareness and is rooted in Jewish tradition.

In the Talmud we find, Rabbi Abba said: You have no greater sign of the revealed redemption, than when produce will grow in abundance in Eretz Yisrael, it indicates that the Messiah will be coming soon. (Sanhedrin 98A).

As is says, “But you, mountains of Israel, you shall give your branches, and yield your fruit to My people of Israel, for they will soon be coming” (Ezekiel 36:8).

We have seen this come true in our time, with the return of the Jewish people to their ancient homeland, and the blossoming of agriculture in Israel. Yet Israel faces the same issues as in other parts of the world, poverty, pesticide use and related health problems, land and water scarcity, and waste disposal.

Robin believes that a school can be a meaningful agent of social change and recognizes the great potential of students to make important contributions. StartUpRoots addresses these Israeli and global problems, and empowers students to become part of a Jewish Green Solution.

StartUpRoots’ curricula, cultivates curiosity and problem solving through experiential learning. These educational experiences are complemented with tangible results, like growing fresh vegetables, for the school cafeteria, or for students to bring home. Students also develop important life skills as they explore hydroponic farming in the context of Judaism, science, nutrition, entrepreneurship and photojournalism curricula.

Robin says that they are constantly developing new systems, both to optimize food production and to promote constant innovation and experimentation in their students. Since StartUpRoots began, they have been able to increase production from 24 plants per meter to more than 124 plants per meter. By increasing output, they are able run projects in the most unlikely of spaces.

StartUpRoots provides an educational platform, to inspire and equip students, to become better educated consumers. It prepares them to tackle the global food crisis. By giving students and teachers the tools to continue developing better answers, they are growing the next generation of Green Tech entrepreneurs, for a better future.

To learn more about the StartUpRoots program and how to bring it to a school near you; to support their mission to teach environmental awareness, advance food justice, entrepreneurship, and to bring the words of the prophets to life, visit their website at: www.startuproots.org.il