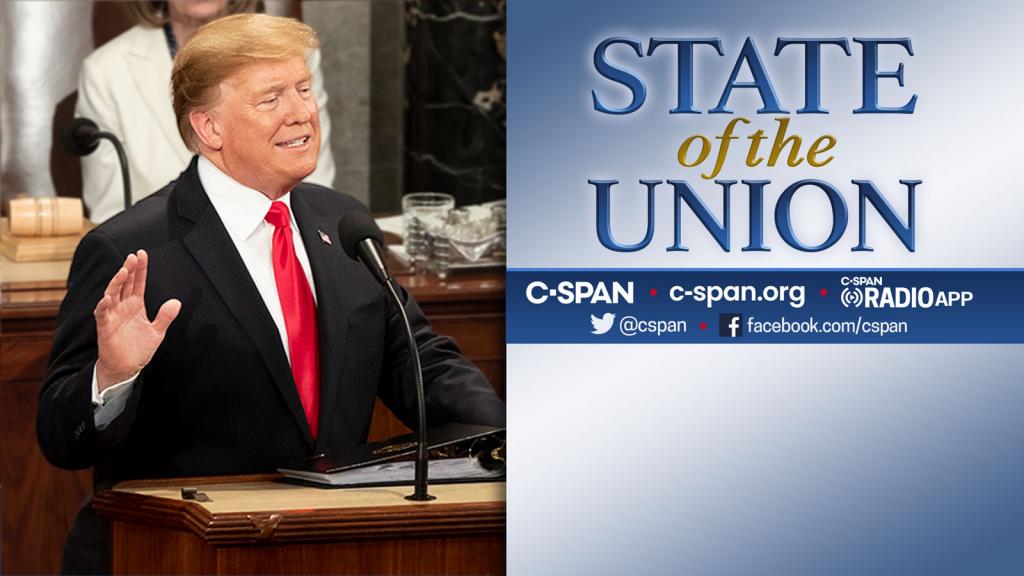 President Trump on Tuesday evening is to make his annual State of the Union speech, accepting an invitation from the House of Representatives that recently impeached him. Photo Credit: C-SPAN

President Trump on Tuesday evening is to make his annual State of the Union speech, accepting an invitation from the House of Representatives that recently impeached him.

Senators are scheduled to vote Wednesday on whether to convict Trump and remove him from office. It is virtually certain they will acquit him on the charges of abuse of power and obstruction of justice, because his Republican Party holds a majority in the Senate, where a two-thirds vote would be needed for conviction and removal.

“It’s unprecedented in our nation’s history to have a State of the Union address from an impeached president running for re-election,” noted University of Akron political science professor David Cohen. “These events read like political thriller fiction, except they’re actually happening.”

The theme of Trump’s third State of the Union speech will be “The Great American Comeback.”

“I think he’s going to give a positive, forward-looking vision,” said a senior administration official, adding that Trump “will encourage Congress to work with him to continue to build an inclusive economy where the least well-off are making some of the fastest gains and where people of every background are finding new opportunities.”

Trump, however, on Sunday evening seemed to dampen expectations he will get that cooperation in an election year from the House, which is controlled by the Democratic Party and voted for his impeachment in December.

“I’m not sure that they can do it, to be honest. I think they just want to win and it doesn’t matter how they win,” Trump told the Fox network in a Super Bowl Sunday interview.

This year’s State of the Union speech in the House chamber, attended by Democratic and Republican lawmakers from both legislative chambers, as well as guests such as Cabinet secretaries and Supreme Court justices, is likely to be watched by about 50 million people — about half the estimated audience of Sunday evening’s professional American football championship game.

Trump repeatedly emphasizes in remarks to reporters and at political rallies the record-high levels for major U.S. stock market indexes, for which he credits his administration’s economic policies.

It is not known whether Trump will directly address his impeachment.

Trump’s address, however, is to focus on domestic issues and he is not expected to make any remarks that will be “Earth-shattering or new with respect to foreign policy,” according to a senior administration official.

As is usual for such a high-profile address, “basically the whole government works on this speech because you engage in a process that touches upon every department,” said a senior administration official, noting that several officials had been tasked with crafting the address but “it begins and ends with the president.”

One of Trump’s two official guests for his address, according to the White House, will be a former U.S. Army veteran of the war in Afghanistan, Tony Rankins of Cincinnati, who suffered from post-traumatic stress disorder and became addicted to drugs, which led to several prison sentences and living out of his car.

“A company called Our Investments helped train Tony in carpentry, painting, brick work and other construction trades,” noted a senior U.S. official. ”And his new job has helped him overcome drug addiction and reunite with his family.”