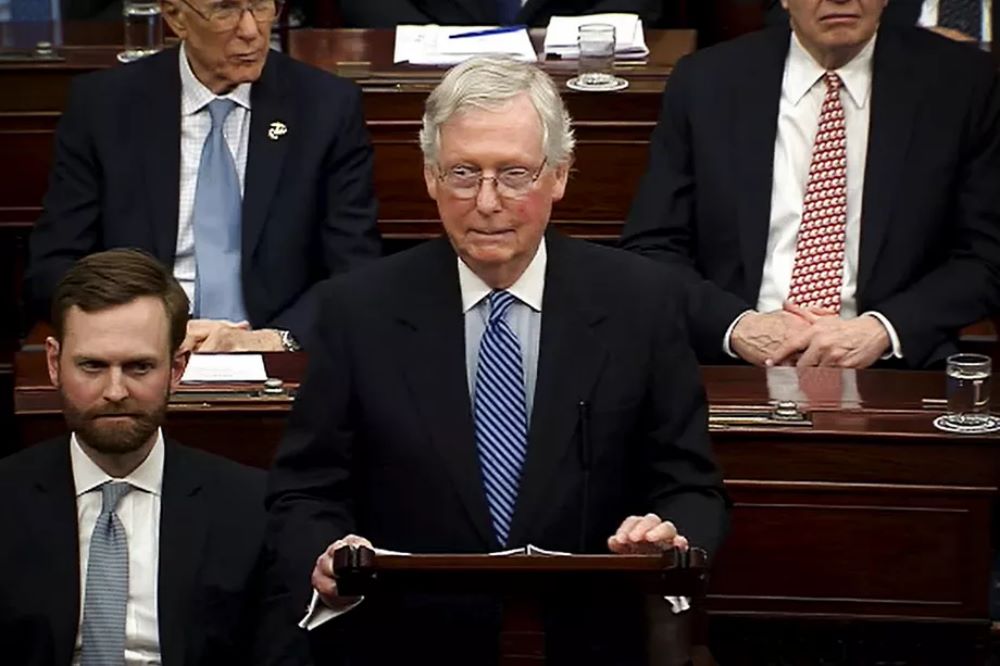 President Trump’s acquittal Wednesday on impeachment charges is a watershed moment in his presidency, exonerating him of wrongdoing just nine months ahead of next November's national election when he is seeking a second term in the White House. Photo Credit: Getty Images

President Trump’s acquittal Wednesday on impeachment charges is a watershed moment in his presidency, exonerating him of wrongdoing just nine months ahead of next November’s national election when he is seeking a second term in the White House. He was found not guilty on the first charge of abuse of power, 52-48; and found not guilty on a second charge of obstruction of Congress, 53-47.

Trump’s acquittal likely will have huge long-term implications on politics and the balance of power in Washington with the president’s hand strengthened heading into the campaign season. Only one Republican, Senator Mitt Romney, the losing 2012 Republican presidential candidate, voted to convict the Republican Trump on the first charge of abuse of power, assailing his conduct as “wrong, egregiously wrong”. On the second charge of obstruction of Congress, Romney voted not guilty.

Trump is in a position now to make use of Wednesday’s acquittal to his advantage ahead of the election, even as a collection of national polls shows he remains an unpopular president with a job approval rating in the mid-40% range in a politically divided country.

“It’s amazing what I’ve done,” he wrote on Twitter as his impeachment trial neared the end, “the most of any President in the first three years (by far), considering that for three years I’ve been under phony political investigations and the Impeachment Hoax! KEEP AMERICA GREAT!”

Trump now is the third U.S. president in the country’s 244-year history to have faced impeachment charges, but been acquitted in Senate trials to remain in office, after Andrew Johnson in the mid-19th century and Bill Clinton two decades ago. Trump is the first, however, who has been cleared and then faces a re-election campaign to remain as the U.S. leader. An array of Democratic challengers, none of whom has yet to emerge from a large field of candidates as the clear choice of Democratic voters, is vying to be his opponent.

At the outset of the trial, Congressman Adam Schiff, the lead Democrat prosecuting the case against Trump, laid out the stakes.

But as the trial wound down, one of Trump’s impeachment defense lawyers, noted criminal defense attorney Alan Dershowitz, argued to the 100 senators acting as jurors for an expansive view of U.S. presidential power. He said that even if Trump had engaged in a quid pro quo deal with Ukraine to benefit himself politically, it was not an impeachable offense, a viewpoint disputed by U.S. constitutional scholars.

But Dershowitz’s view, since Trump has been acquitted, could effectively become the standard by which the actions of future presidents are judged.“

If a president does something which he believes will help him get elected in the public interest, that cannot be the kind of quid pro quo that results in impeachment,” Dershowitz argued. He later said his comment had been misconstrued and that he did not mean to contend that U.S. presidents always have unlimited power.

However, another Trump lawyer, deputy White House counsel Patrick Philbin, said a president asking Russia and China to look into his political opponents, as Trump has done, does not violate U.S. campaign finance laws making it illegal to accept or solicit a “thing of value” from foreign governments.“

During the weeks of the impeachment investigation in the House of Representatives late last year and the trial in the Senate the last two weeks, there was little dispute of what Trump did, rather the interpretation of it.

In a phone call last July 25, he asked Ukrainian President Volodymyr Zelenskiy to “do us a favor,” to investigate one of his chief 2020 Democratic rivals, former Vice President Joe Biden, his son Hunter’s work for a Ukrainian natural gas company and a debunked conspiracy theory that Ukraine had meddled in the 2016 U.S. election to undermine his campaign. At the same time, Trump was blocking release of $391 million of military aid Kyiv wanted to help it fight pro-Russian separatists in eastern Ukraine.

No one in the public knew about Trump’s request for the Ukraine investigations to benefit himself politically until a still-unidentified government intelligence worker familiar with the call between the two leaders filed a whistleblower complaint alleging that Trump had sought help from a foreign government to help him in the 2020 election. (VOA News)