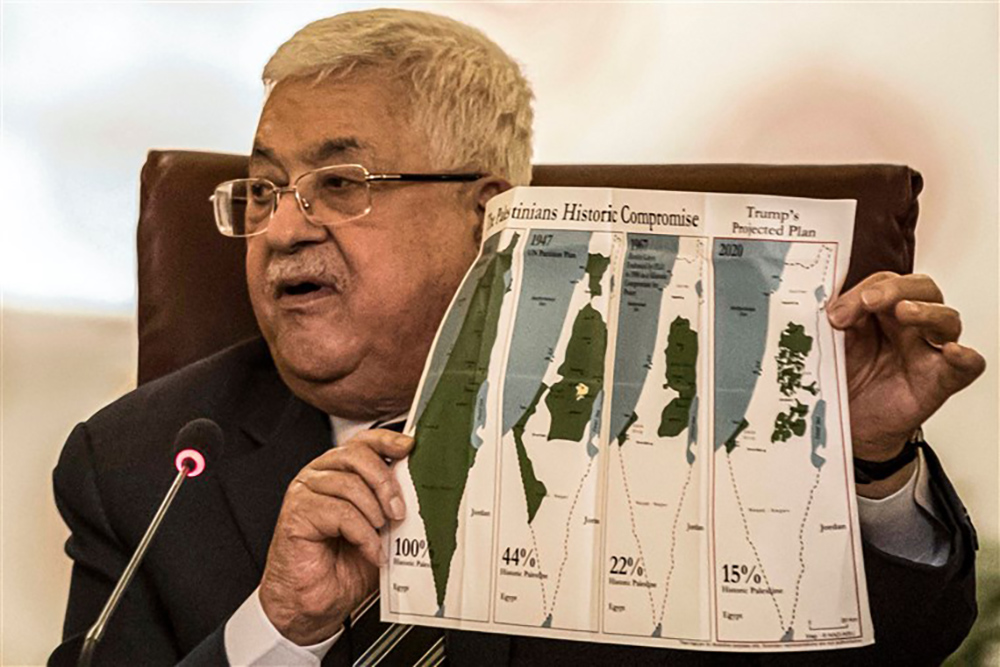 The Trump Peace Plan gave the Palestinians the opportunity to have their own nation, and abide by rules which include disarmament, the cessation of terrorism, joining the free world, caring for the future of their own people, but mostly, offering their recognition of Israel as the one and only Jewish state; a state that will continue to exist. Photo Credit: Getty Images

The Arabs masquerading around, calling themselves, “Palestinians” who have been running around, whining about not being given their own independent state have to now be firmly ignored and shunted off to some obscure corner of the planet where they could be happy killing off one another in acts of holy accordance with their beliefs. President Trump has finally called their bluff, told them to do their thing or get off the pot. His patience with them, after three hapless years of dealing with them, has worn out. The Peace Plan he proposed last week gave them the opportunity to have their own nation, but first, they would have to, G-d forbid, follow some rules which include disarmament, the cessation of terrorism, joining the free world, caring for the future of their own people, but mostly, offering their recognition of Israel as the one and only Jewish state; a state that will continue to exist. That’s a tough one for them to swallow given the indoctrination of hate that they have suckled from the likes of Yasser Arafat and their current President-for-Life, Mahmoud Abbas.

Lest we forget the ubiquitous chant that has come to symbolize the Palestinian desire not to achieve peace, but rather to summarily destroy Israel as a Jewish state and to murder every Jew who resides there. “From the River to the Sea, Palestine Will Be Free.” And let’s face it, despite the fact that Trump’s peace plan really puts the Palestinians to the ultimate test as to whether or not they genuinely and realistically want long-range peace with Israel, the Palestinians are still enjoying the vast majority of the world’s support in their quest to vilify Israel.

Case in point: At the recently held World Holocaust Forum in Jerusalem, the Prince of Wales, (the next in line to the succession of the throne in the House of Windsor) politely uttered some words about how horrible religious and racial hatred is and how we must be vigilant about the proliferation of anti-Semitism. The most senior British royal under that of Queen Elizabeth then continued his political brinksmanship by traveling to Bethlehem and lamenting the conditions that Palestinians live under and said he hoped for the day when the Palestinians will achieve “freedom, justice and quality.” As if to say, they enjoy none of those precepts now. They have more freedom, justice and equality than any of their brethren on any Arab/Muslim country in the world.

The Palestinians would have to jettison the lie that Israel exists on stolen land….. what they falsely consider, their land. Israel never stole land from any Arabs. The area named by the Romans as Palestine when they conquered ancient Israel back in 72CE, never, until 1948 harbored any independent state, never had a king, emperor and to rub salt into their wounds, the Jews living in that area referred to themselves as “Palestinians,” and the Arab residents living there called themselves Arabs or Syrians. Recall, the Jerusalem Post was formerly, The Palestinian Post and the Jewish Palestinian boys who fought under the British flag in both WWI and WWII wore the insignia of the Palestinian Brigade. Not until Arafat, in 1964 created out of nothingness, The Palestinian Liberation Organization (PLO), did they filch that name for themselves and suddenly falsely assumed a history of thousands of years.

These Arabs must recognize the Jewish history on that land and must cease denying Israel’s right to exist. Apparently they are not ready for this reality lesson. It is the so-called “Palestinians” not Israel or its leader, Netanyahu, who are refusing to accept a two-state solution. We call out those, even Jews, who are parroting “Palestinian” falsehoods that destroy the cause of peace. We urge them all to learn a bit of history and finally, the whole bunch of them, to grow up!