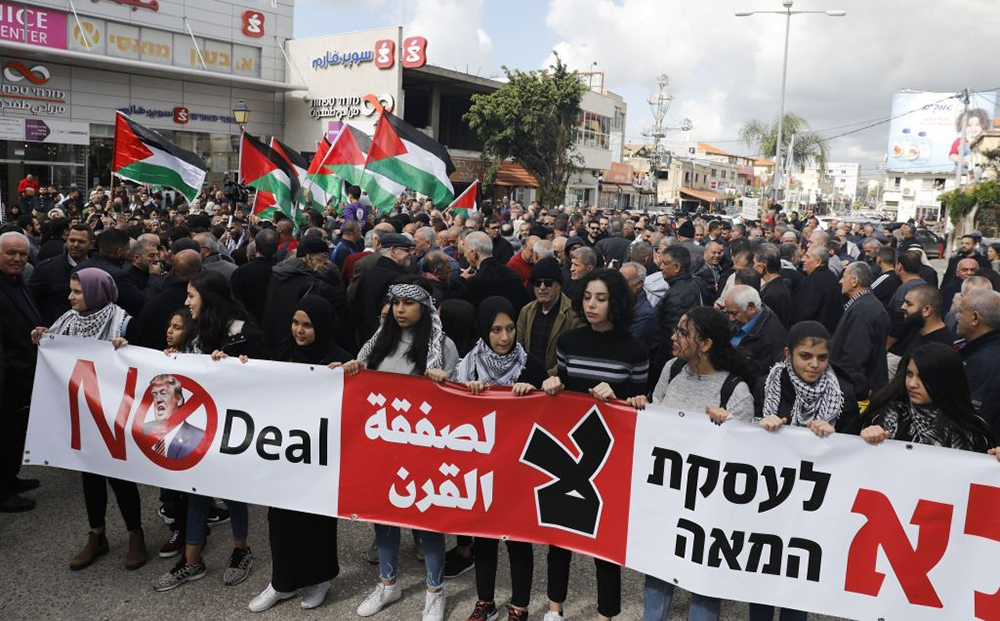 Arab citizens of Israel, who number nearly two million, are up in arms about President Trump's plan for Middle East peace, which proposes including some of their communities in a future Palestinian state. Pictured: Residents of the Arab-Israeli town of Baqa al-Gharbiya protest the Trump peace plan, on February 1, 2020. (Photo by Ahmad Gharabli/AFP via Getty Images)

Arab citizens of Israel, who number nearly two million, are up in arms about US President Donald Trump’s plan for Middle East peace, which proposes including some of their communities in a future Palestinian state. Since the unveiling of the plan, thousands of Arabs have been demonstrating to express their rejection of the idea of placing them under the sovereignty of a Palestinian state.

Trump’s “Peace to Prosperity” plan proposes land swaps that could include both populated and unpopulated areas. It suggests that the so-called Triangle area in Israel, consisting of several Arab communities “which largely self-identify as Palestinian, become part of the State of Palestine.” The plan points out that the Arab communities “were originally designated to fall under Jordanian control during the negotiations of the Armistice Line of 1949, but ultimately were retained by Israel for military reasons that have since been mitigated.”

Why are the 250,000 Arab Israelis living in the Triangle area strongly opposed to the idea of becoming part of a Palestinian state?

The main reason Arabs in Israel are afraid of becoming Palestinian citizens is because they know that the Palestinian state will be anything but democratic. Many Arab citizens of Israel see how Palestinians living under the Palestinian Authority (PA) in the West Bank and Hamas in the Gaza Strip are subject to human rights violations on a daily basis.

In Israel, Arab citizens participate in the general elections and have their own representatives in the Knesset. In the West Bank and the Gaza Strip, Palestinians have been deprived of free and fair elections since January 2006.

In light of the ongoing dispute between the PA and Hamas, the prospects of holding new presidential or parliamentary elections remain zero.

While Palestinians have not had a functioning parliament since 2007, when Hamas violently seized control of the Gaza Strip after overthrowing Abbas’s PA regime, Israel’s Arab citizens continue to run in elections for the Knesset. The current Knesset has 14 Arab parliamentarians.

Apart from the issue of elections, though, Arab citizens of Israel are mainly worried about having to live in a Palestinian state that suppresses public freedoms, including freedom of speech and the media.

Hardly a day passes without the Arab citizens of Israel hearing about the harsh conditions the Palestinians face under the PA in the West Bank and Hamas in the Gaza Strip. Palestinian journalists, human rights activists, political activists and university students are targeted by the PA and Hamas on a regular basis.

That is what Israel’s Arab citizens are afraid of.

A recent report by the West Bank-based Committee of the Families of Political Prisoners revealed that the PA security forces have arrested dozens of university students in the past few months because of their political activities. The report documented at least 619 violations against university students by the PA security forces in the past two years.

Arab students who are citizens of Israel, meanwhile, are free to hold protests on campuses there without having to worry about being arrested or summoned for interrogation. Last week, for example, Arab students at Tel Aviv University demonstrated against the Trump plan, chanting “Palestine is Arab, from the [Jordan] river to the [Mediterranean] sea.”

Palestinian Arab university students, however, who are not citizens of Israel, and who live in the Palestinian areas of the West Bank and Gaza Strip, can only envy the Arab Israeli students who are free to hold political activities on campus. Another recently published report revealed that several students arrested by the PA security forces have been brutally tortured. Most of the arrests took place at An-Najah University, the largest university in the West Bank city of Nablus, according to the report.

Palestinian students living in the Gaza Strip under Hamas, where virtually everyone is Arab and not a citizen of Israel, have fared no better. Hamas security forces have been regularly raiding university campuses and arresting students and teachers because of their political activities. One of the campuses that has been frequently targeted by Hamas is Al-Azhar University in Gaza City. In November 2019, Hamas security forces also raided Palestine University in the northern Gaza Strip and arrested several students who were preparing to hold a political rally on campus.

While in Israel, Arab citizens are free to criticize the Israeli government and leaders, Palestinians in the West Bank and Gaza Strip who speak out against the PA or Hamas often find themselves behind bars.

In the West Bank, for example, a professor who dares to criticize Abbas could find himself in detention for several days. Professor Abdel Sattar Qassem, an outspoken critic of Abbas, was accused in 2016 of “insulting” Abbas and held in detention for several days. Palestinian journalist Majdoleen Hassouneh was also accused of “insulting” Abbas on Facebook.

In the Gaza Strip, Hamas has arrested hundreds of its political opponents in the past few years. Even Palestinian comedians who make sarcastic remarks about Hamas have become regular targets of Hamas’s crackdown on freedom of speech. Recently, Hamas security forces arrested comedian Adel Mashoukhi after he posted a video on social media mocking the electricity crisis in the Gaza Strip.

The Arab citizens of Israel need real leaders who properly represent them in the Knesset and build — not destroy — bridges with Jews. Let the protests on the streets of Arab Israeli communities against becoming part of a Palestinian state serve as a fair warning to Israeli Arab leaders: stand by your people, or get out of the way.

Khaled Abu Toameh, an award-winning journalist based in Jerusalem, is a Shillman Journalism Fellow at Gatestone Institute.