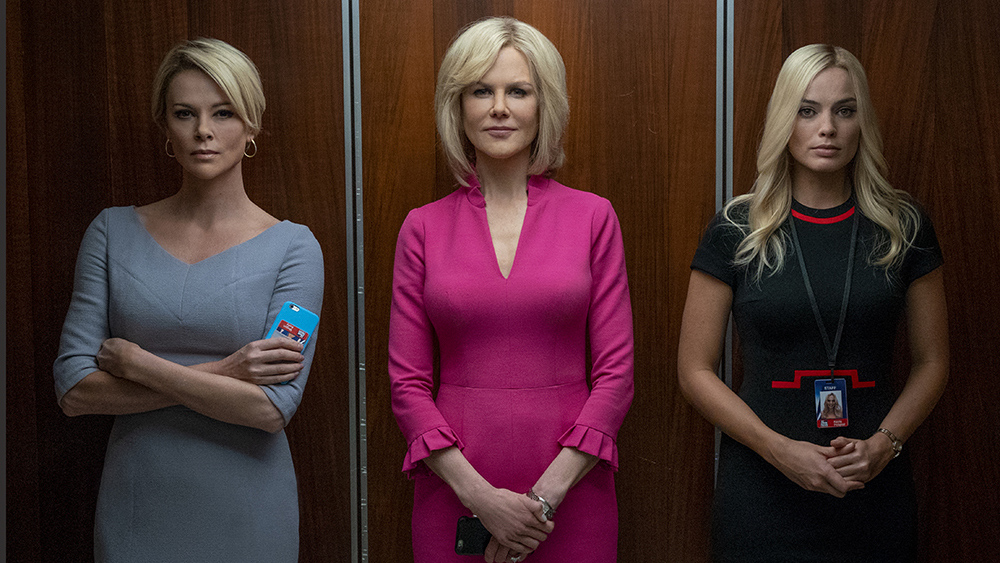 The women who worked at FOX were almost all interchangeable blonde Barbie dolls with extraordinary figures and high fashion tight-fitting clothing—“dolls”— who were also very smart, ambitious, beautiful, but who were subjected to the most profound shame and guilt by Roger Ailes

I finally saw Bombshell and it was far better than I’d expected it to be. Brilliantly acted (Charlize Theron, Nicole Kidman, Margot Robbie, John Lithgow), it was also fast-paced, and amazingly dramatic given that most viewers already know what happened in real life. Bombshell was also unexpectedly painful for me since it reminded me of my own experiences of being sexually harassed and assaulted—something that was pandemic for most women of my generation but for which we had no name.

The women who worked at FOX were almost all interchangeable blonde Barbie dolls with extraordinary figures and high fashion tight-fitting clothing—“dolls”— who were also very smart, ambitious, beautiful, but who were subjected to the most profound shame and guilt by Roger Ailes. Gretchen Carlson, who blew the whistle first, kept waiting for other female anchors to come forward. More than twenty five FOX female employees of long ago did so—but not those who were still anchoring programs. And then Megyn Kelly came forward, and blew the whistle and it was Game Over for the serial assaulter Roger Ailes who, to the very end, did not think that he had done anything wrong. On the contrary, as he insisted, he’d mentored and promoted these women and gave them powerful roles… everyone has to pay some kind of price for success, right?

As I sat there I got angrier and angrier. In 1980 (yes, that long ago), I had been sexually harassed and raped by my employer at the United Nations and I finally wrote about it at length in 2018 in A Politically Incorrect Feminist.

I had waited for my two close feminist leader friends to join me in confronting my rapist privately, only privately. He had diplomatic immunity and I could not sue him or have him arrested for a crime he committed in New York City. My two well-known feminist friends, leaders both, absolutely refused to do so. Perhaps at first, they conveniently chose to assume that we’d had an affair that had gone south. I tried very hard to clarify that this was not the case. Finally, three years later, they agreed to a private meeting and promised to reach out to him so this man could not “go to his grave thinking he could divide the likes of us.”

He went to his grave. He did divide the likes of us. Or rather, the feminist failure, the failure of women to refuse to collaborate with harassers and rapists; the failure of women, including feminist leaders, to believe what women say and to stand by them—is what has divided us. Unbeknownst to me, one of them had been working with my rapist on the Proceedings of the conference that I had organized and on an anthology about international feminism. Such a small gain. The other one merely covered for her.

But, they also both claimed they could not support me because my harasser and rapist was an African man, a black man, a man of color. Years later, these same feminist leaders stood by African-American Anita Hill against an African-American judicial applicant—because he, Clarence Thomas, was a conservative judge; and they stood by Bill Clinton, not by the women who accused him of rape and harassment. They had no feminist principles. It was always about partisan politics.

And, I’m the one who’s been taken to task for daring to write about this, for having exposed it, and for having named names. I was viewed as the traitor to feminism, not those two.

Oddly, as the #MeToo sex crime trials make endless headlines, few feminists, other than myself, have dared to note the circumstances in which women, like men, enable the predators: the wealthy women who funded the pedophile, Keith Raniere of Nxivm, and his many female followers who seduced other girls and women into his sex slavery and branding cult.

I’ve yet to read a feminist analysis in the mainstream media about the role Ghislaine Maxwell played as Epstein’s alleged pimp.

A movie, a simple movie, right outta Hollywood, reminded me of how a combination of female ambition and female vulnerability, female attractiveness and the ability to shame it, spoil it, works in this world. I guess I really was traumatized by what happened, but not so much by the rape; much more so by the female, and feminist complicity with a serial rapist. None of the accused sexual harassers and rapists could not have done it alone without the collaboration, coverups, denials, and cowardice of both women and men, nor could Harvey Weinstein, Roger Ailes, Bill O’Reilly, Bill Cosby, or Matt Lauer.

The history of black slavery in America, Jim Crow laws, lynchings, white racial discrimination and white police brutality against black men, fatherless black families, male black-on-black violence, etc. is what has fatefully claimed the imagination of progressives and anti-racists, including that of white feminists.

The sexual violence that afflicts women of all colors, has been forced to take a seat at the very back of the bus.